When Ted Cruz announced that he’s going to run for the President of the United States, comedians and satirists around the country stood up and hugged their families in loving embraces brought on by pure, unadulterated joy. It’s like they could already see the media circus that will inevitably follow the candidacy of a man who can be called anything but “boring.” But the honeymoon period already seems to be over now that Jon Stewart has taken a bunch of swings at the junior Senator from Texas in his segment “Let’s Get Rid of Ted Cruz.”

Well, with all due respect to Jon Stewart, but getting rid of Mr. Cruz is the last thing we want to do. Not because he’s the candidate that America needs, but because whenever he’s in the spotlight, Ted Cruz has this uncanny talent of often saying and doing the right thing, even if it is for all the wrong reasons.

For example, after Cruz’s tweet comparing Net Neutrality to Obamacare, everyone, including a few Republicans, joined in on calling the man out on his technological ignorance. But, bizarrely, if we look closely at federally-regulated Net Neutrality, the Obamacare comparison suddenly doesn’t seem so off. After all, both are meant to keep private companies from screwing over the consumer, like how Obamacare has made it impossible to deny someone coverage based on preexisting conditions, or how thanks to Net Neutrality your internet provider has to grant you equal access to all online data. Essentially, they set up a reasonable framework within which private businesses can thrive, without the government actually taking control of health care or the internet. It’s absolutely NOT what Ted Cruz meant but his comparison does sort of hold up.

Then there are Ted Cruz’s plans for space exploration. As chairman of the subcommittee on Space, Science, and Competitiveness, Ted Cruz is actually responsible for overseeing NASA. But given his well-documented and aggressive aversion to science, one would almost expect that his first act would be to try and dismantle the space agency on account of: “If God wanted people to go to space, he would have put a lot more oxygen in there.”

Instead, Ted Cruz surprised everyone with his vision for NASA which included more space exploration and maybe even sending people to Mars. If he is even partially successful with it, it will be his greatest accomplishment not only as a politician, but also as a human being…provided you don’t ask him why he’s doing it. Because Cruz’s dreams of bringing Star Trek to life were not born from his curiosity or the need to advance science. It was because, to him, the Cold War never ended. When announcing his plans, Cruz referenced the original Moon mission, and how it was actually a “battle between freedom and tyranny.” In Ted Cruz’s mind, if the Soviets were the first to put a man on the Moon, they would have polluted it with their communism, which would then be reflected onto Earth, magnified thousand-fold, transforming the entire planet into borscht-drinking Marxists. Cruz simply doesn’t want to risk it by letting the rest of the world beat the U.S. to other celestial bodies in our Solar System. His plans for NASA are laudable but they are the equivalent of giving money to the homeless because deep down you sincerely believe that they will use it to drink themselves to death. Instead, whatever NASA does should be driven for science, which Ted Cruz sadly doesn’t seem to get.

Earlier this year, Cruz appeared on Late Night With Seth Meyers where he talked about global warming, at one time saying that “Debates on this should follow science, and should follow data.” Unfortunately for him, the only reason Ted Cruz supports that view is because he thinks the science isn’t all there, when in fact, it is. It’s not really a point of contention anymore. The majority of the scientific community agrees that global warming exists, and that humans are the cause of it. Still, it’s nice for Senator Cruz to ask for the scientific evidence, because global warming is an issue that shouldn’t be driven by emotions but by raw data, even if he doesn’t understand it himself.

This isn’t to say that Ted Cruz is stupid. He isn’t. By all accounts, he is very smart. You sort of have to be to graduate from Princeton and Harvard Law School. But “smart” is a broad term. Just because a person is smart when it comes to the law and politics, it doesn’t mean that they are automatically right about science or, say, women’s rights. But they can be accidentally right about them, which Ted Cruz has proven the second he congratulated First Lady Michelle Obama for standing up for women’s rights worldwide.

Michelle Obama has actually done quite a lot of good by working with communities all around the globe to help spread the ideas of gender equality, and she deserves praise for that. The problem is that Ted Cruz gave the First Lady her much deserved kudos because he was convinced that she was intentionally slighting Saudi Arabia. In January 2015, while visiting Riyadh, the Obamas met with the new Saudi Arabian king, Salman bin Abdul Aziz, during which time the First Lady was not wearing a hijab (head scarf). Ted Cruz took it as a salvo in the never-ending war between the West and the Muslim culture that is happening inside his head, and thus offered Michelle Obama a virtual fist bump through Facebook where no one could see him being left hanging.

And that is why we need Ted Cruz to stay in the race for President. Not only will he accidentally do and say the right thing from time to time, but he will also be entertaining while doing so, and isn’t that the best that we could hope for from any elected official? 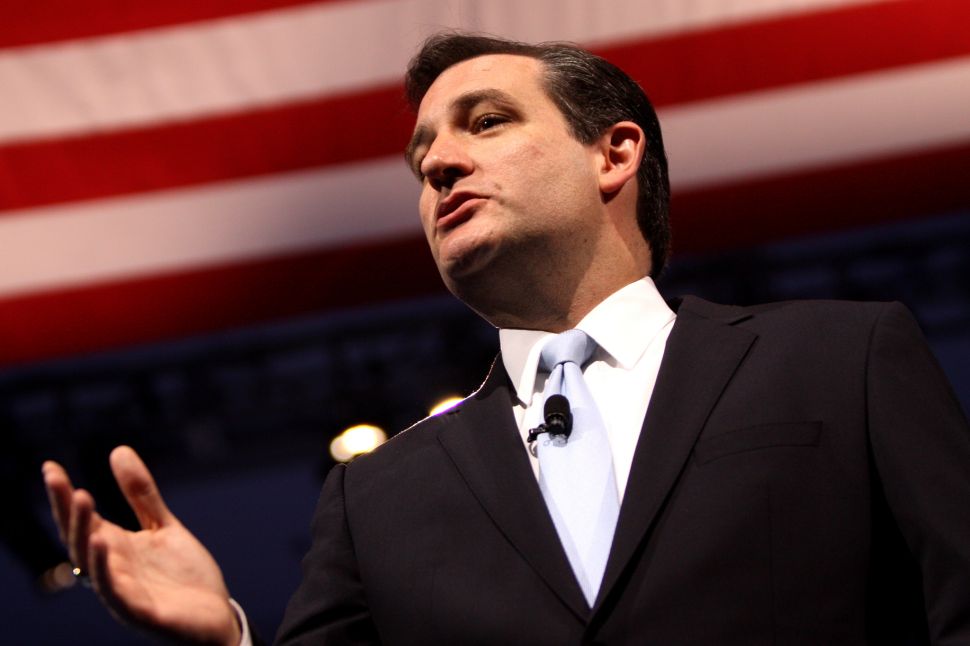