NADA New York’s austere facade welcomed a hearty line of art lovers on Thursday as 100 international exhibitors steeled themselves for the onslaught of patrons. 100 may seem like a lot at first blush, but it was a welcome number after Frieze, which felt like some distant Dothraki tent city.

Unlike the aforementioned island fair, NADA has a “user-friendly” atmosphere. Access was affable and breezy, and it seemed like dealers were putting their best foot forward. David Petersen Gallery, which hails from Minneapolis, set a gothic yet succulent tone with a pair of actual-size handmade bathtubs by Brooklyn-based artist Lukas Geronimas. The two magnificent wood and plaster works are adorned with crude drawings and then drenched in India ink and graphite powder. One sold rather quickly for $12,000. Oddly enough, they would’ve fit right into the 2004 Whitney Biennial, spearheaded by Shamim Momin. Perhaps we’re coming out the other end of a decade-long reign of abstraction?

One artist who seems to easily coalesce all kinds of moments these days is Ted Gahl who has a solo booth with the East Hampton-based gallery, Halsey McKay. Gahl, a terrific paint handler even at the moderately young age of 31, conjures up the ghosts of Rothko and DeKooning in his large-scale paintings, yet buries blown up replicas of his childhood drawings within these lyric compositions. The association is powerful. This abstract stuff is child’s play, Gahl seems to say. My kid could do it… or could she? Most of the works were already sold for between $8,000-$14,000. Gahl even has the gall to dip into zombie territory with his “paint stirrer” series; a handsome grouping of geometric relief paintings that are beautifully stained in colors like gunmetal and earth red. The odd geometries created by the hardware stirrers being buried beneath stretched canvas act as both a lowly exercise and a comment on painting’s silly argument between surface and image. The booth shows both serious talent and impressive range.

The NADA projects–which usually resemble upright art coffins–seem to have been perfected by young Brooklyn galleries this year, particularly Jackie Klempay’s rarified booth of Lakela Brown objects (small sculptures that mix hip-hop bravura with archeological awe) and Dan Herschlein’s torsoless body installation, which completely filled Signal gallery’s booth and could be had in it’s entirety for $18,000. It was an endearing creation that easily could have been a Keinholz/Gober lovechild.

Brooklyn was also strongly represented by Soloway gallery, which had a luminous new Graham Collins stitched canvas in their booth. Each shape within this geometric abstraction was cut from a different thrift store painting and added to the mix. An equally impressive specimen (with a triple hold on it) could be found just a few yards away in the booth of Brooklyn’s Journal gallery. This kind of effortless cross-pollination epitomizes the brand of Brooklyn camaraderie that many have grown to know and love.

Soloway also possessed a tough looking Plexiglas, metal, and hair extension sculpture by newcomer Raque Ford, some intimate text paintings by Rebecca Watson Horn, and a vexing steel and fabric wall piece by former Feature Inc. artist, Nancy Shaver. On the whole, this first-time fair participant had one of the stronger booths this year.

At the other end of the figural spectrum is the work of British artist Leo Fitzmaurice, who was featured at the booth of London gallery, The Sunday Painter. Here Fitzmaurice displays a series of wall hung reliefs made from symmetrical automobile shells, headlights, and fenders that tend to resemble alien facial structures. They somehow manage to turn the sexy aesthetic of vintage sports cars into a gang of silly spaceman toys. Though they echo the painted works of the late Peter Cain, the sculptures also elicit a unique melange of sensations thanks to the phenomenon of Pareidolia (seeing faces within lifeless objects.) They were selling well at $10,000 each.

At Vancouver’s Apartment gallery, figures were also available in the form of Janice Guy’s erotically charged self-portraits from the seventies. Only in her mid-twenties when she authored these artworks, Guy’s lushly tinted images of herself photographing her nude reflection take on new layers of meaning in today’s “Post-Internet” age. Hers is a simple idea, yet one that is elucidated with quiet force and rivals the concepts of many great Pictures Generation artists such as Louise Lawler and Laurie Simmons. Today’s young online artists (such as Amalia Ulman) owe everything to Guy’s proto-selfies and their feel for light and material, but can this emerging Internet generation somehow emulate the physical presence of Guy’s analog work? Maybe one day.

Further afield, Roman gallery 1/9 Unosunove mounted an absorbing booth that starred Norwegian artist Per-Oskar Leu and his storyboard homage to the unsettling “donkey” scene in Walt Disney’s Pinocchio. The paint on newspaper works were paired with a surprisingly emotive stop motion animation, and there was even a small pedestaled cart and donkey sculpture nearby to complete the study. Unosunove also boasted some beautiful collaged paintings from New Yorker Dan Shaw-Town. Shaw-Town seems to have always owned the ability to turn a full page underwear ad into an existentialist epiphany, and he does not slouch here.

Toronto’s Cooper Cole seemed like a fitting last stop, with a two-person booth that smartly rubbed the tidy detritus pieces of young Canadian sculptor Georgia Dickie up against the mystical photographs of Andrea Pinheiro. The latter’s work was particularly striking: Images of antiquated objects like buckets and window shades that are overlaid with a variety of alluring natural materials like igneous rock, wood, and crystals, and were well-priced between $4,000-14,000. The pairing emitted a strong aura of Ouija and spectral beckoning (the hints of life past and present) which gave the eye and mind much to chew on.

In fact was heartening to see that even in the middle of a trade floor, artists were able to conjure lucid visions that could kindle and vex the most hardened of viewers. 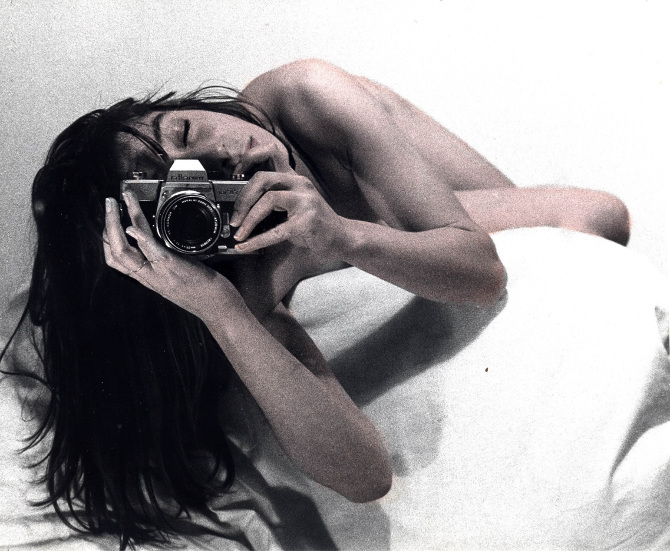