All told, this has been a competent season of The Good Wife. Then again, “competent” is one of those words you use euphemistically, to mask the more complicated truth beneath it. I’m just going to say it: despite some moments of brilliance, Season 6 was an unsuccessful season.

Season 5 of this show was unreasonably good. When The Good Wife sent out those Emmy mailers that compared their episode order to those of Breaking Bad, Mad Men, True Detective, and other critical darlings, I was unequivocally here for it. Twenty-two episodes is an insane thing to ask of anyone, and in the television landscape of 2015, it’s patently unfair. But Season 5 of The Good Wife met that challenge, and then some. Even before we were blindsided by Will Gardner’s death, the drama surrounding Alicia and Cary’s departure from Lockhart/Gardner was the stuff of legend. Mark my words: “Hitting the Fan” will go down as perhaps the finest hour of television ever made by this show. I’m saying all of this to say that the show had a tough act to follow coming into Season 6.

A very tough act indeed. The two biggest ongoing storylines of the season – Cary’s trial and Alicia’s campaign – were both mishandled in a way that the show just couldn’t recover from. As early as last fall, I expressed concern that Alicia’s campaign storyline wouldn’t land. The story suffered from a fundamental lack of agency on Alicia’s part. The entire thing was Eli’s idea, which would have been fine if we had ever gotten to Alicia’s buy-in. But because we never learned why being State’s Attorney was important to Alicia, it never became as important to us as it needed to be to sustain 20 episodes’ worth of story. When it all fell apart and Alicia broke down two weeks ago, I wanted to be right there with her emotionally. I wanted to drink the red wine (because all strong ladies on network dramas need red wine) and cry along with her. But when we got to that moment, I felt a little numb. Was that loss painful just because it robbed Alicia of the thing she busied herself with for a whole season, or was it painful because it actually meant something to her? I still don’t know.

This week, Alicia’s client Jacob Rickter gets gripped up by the cops and held in some sort of Guantánamo-type place, and when Alicia tries to track him down via his Find My iPhone app, the cops throw her out. Turns out he’s in some no man’s land that’s just shy of arrest in a place called Homan Square. Alicia and Finn team up to prove that Jacob’s constitutional rights were violated in this place, and Matan Brody is there to be the customary wet blanket. But the case of the week is essentially an afterthought, because if you watched this episode, you know nothing else mattered other than the scene right around minute 35.

Wallace Shawn shows up looking for Kalinda, presumably so Lemond Bishop can kill her, and Alicia knows it’s trouble, so she hides Kalinda’s note in a coffee can. Wally finds Kalinda in the grocery store (or, more accurately, she finds him, because why not) and she says she’ll sit down with Bishop. Then, later in the episode, she burns Kalinda’s note in front of Wally, because she’s completely over it and Finn won’t do sex to her so she’s lost the will to live.

On the personal front, I have been pulling since before the holidays for Alicia and Finn to get together, make out, do something, and the show has proven it can out-wait me. In the game of ‘shipper chicken, The Good Wife wins. I used to pull for Falicia because it was something fun to care about. Now I don’t know what to pull for anymore. Everything the Kings have done with Falicia has been cruel and manipulative, and I don’t want to play anymore, and then all of a sudden Finn and Alicia are in a car together, and my grievances go flying out the window and I want them to do sex to each other. I’m like a Boston Terrier when it comes to them. I’ve been given no indication that anything will happen but I’m irrepressibly hopeful. Why is Finn trying to work things out with his ex-wife? I’ve been hearing about this lady ever since he cradled a dying Will in his arms, but because I know Alicia and not Ex-Wife, I can’t bring myself to care about Finn’s marriage. Stay, Finn. Do another shot. Get sloppy. Let something bad happen. Just please, Finn, whatever you do, don’t go all the way to the apartment of the lady you want to bone only to say you have to go. Because otherwise, Alicia will regret letting you leave and the doorbell will ring and instead of you, it’ll be Louis Canning wanting to partner. I know that in real life, it goes like this sometimes. You become attracted to a person and all you want in life is for his or her tongue to be in your mouth, but you know that that will only lead to trouble, so you abstain. But isn’t television, that most intimate of media, supposed to be experience vicariously? If we shouldn’t have extramarital affairs in real life, shouldn’t we enjoy them in our popular fiction? The element of salaciousness between Alicia and Will was a major selling point of the entire series, and aside from Jon Elfman, Alicia hasn’t gotten much action at all. Going forward, the Kings are gonna have to figure out how to sex up the show, and fast.

However, any Good Wifer worth his salt knows that the real ‘shipping to be done on this show has nothing to do with sex. Yes, ladies and gentlemen, I’m talking about Alicia and Kalinda. It’s no secret that Kalicia hasn’t been a thing since the 112th Congress, and we’ve all been dying to see how the Kings resolved things in light of this being Archie Panjabi’s last season. That scene between Alicia and Kalinda in the bar will be analyzed frame by frame until the end of days, so let’s just do ourselves a favor and get it out of the way now.

I was on Team “They Shot This With Stand-Ins and Maybe Their Two-Shot Is Fake” until Kalinda’s speech about wishing they had the chance to do it all over again because their friendship meant everything. I watched this entire scene in a slack-jawed heap. I scratched my face for several seconds afterward. I’m a shell of a human being after this scene. This scene is the reason the word “meta” was invented. This scene is the reason I believe in unicorns and cotton candy. When the archaeologists of the year 3500 CE find our remains, I hope that this scene exists in some form of physical media next to several dog-eared copies of The Canterbury Tales. I am still in my living room screaming and tearing at my clothing, mainly because I’m jealous of anyone who can pause halfway through a glass of red wine to do two tequila shots and still be a functioning person. What is Alicia, 19 years old? Then again, what does one do when Hologram Kalinda pops up next to you at the bar? One does tequila shots and tries not to cry.

I don’t know where Alicia Florrick goes from here. I listened to the Kings on Fresh Air recently, where they said that they’ve always known their endgame with Alicia, and I really want to believe them, because The Good Wife is much, much better than broadcast TV deserves. I just hope that Season 7 gives Alicia the journey she deserves.

P.S…. they want Peter to run for president so he can lose and be vice president? The hell? Peter, stop being surprised that everyone is laughing when you tell them this.

P.P.S. The most stellar exchange of the episode:

Louis Canning (after learning that Cary, David Lee, and Diane fired his wife): In all our years of struggle, I have never gone after any of your family members.

David Lee: We have no family members. 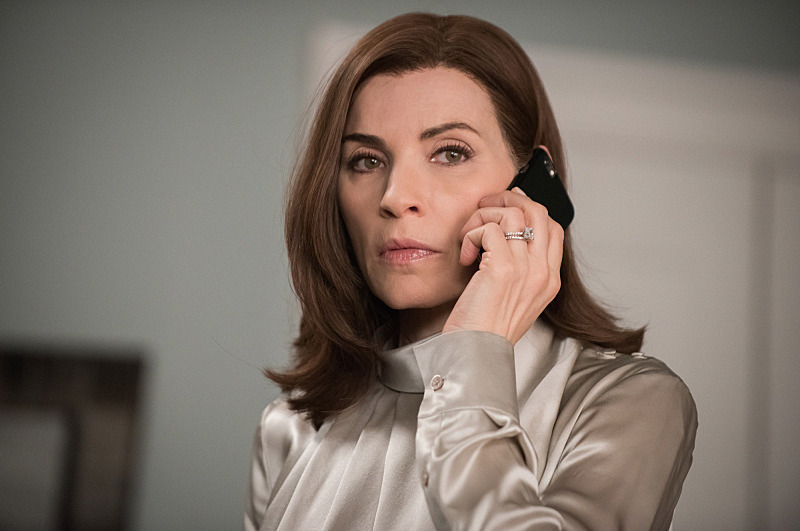