It’s hard to believe we’ve already reached the season finale of this glorious show, what with how positively riveting it’s been rehashing the same sex rumors every week. But alas, all good things must come to an end.

Last night’s episode began on a happy note: Inspired by last week’s horse races, Gamble has organized a race in the park for the Housewives’ dogs. Keep in mind these are not purebred, athletic animals, but tiny, psychotic balls of fluff the women rather generously refer to as “dogs.”

Nevertheless, Gamble seems to have spent a butt ton of time and money putting this event together. It must be nice not having to work a real job! Also, I love that a helicopter was evidently employed to film this whole ridiculous occasion.

But the real MVP of today’s event is Patrick, Janet’s overly-emotive hairdresser, who for whatever reason has been recruited as a dog handler, and looks totally overwhelmed by the task:

The dogs gather at the starting line as epic music begins to play in the background. This feels like the climax of a feel-good baseball movie or something. The dogs take off, the footage shown in slow motion. Has The Real Housewives of Melbourne become too self-aware? I don’t care—I love this. It’s miraculous. While most of the dogs don’t realize they’re supposed to run forwards, Lydia’s dog, Figaro, takes off like a shot. It looks like he’s going to win, until Cash, Gamble’s Pomeranian, appears out of nowhere like a fluffy torpedo and takes first prize.

Next up, Pettifleur recruits Chyka to plan her lavish 50th birthday party, which will take place at Pettifleur’s apartment and has a “winter wonderland” theme. She wants dry ice, white Christmas trees, and literal snowflakes falling from the sky. Basically, Pettifleur’s birthday party will be the Yule Ball from the fourth Harry Potter:

The more Pettifleur describes her vision, the more ridiculous it sounds. She wants her cake to be in the shape of a staircase, but also in the shape of the Sydney Opera House. “It represents my journey, like, my life, you know?” she asks Chyka. “I just want to walk in and be so blown away that I’m going to cry,” she adds. Oh—and she also wants it to be a drama-free evening.

Later, Lydia—probably because she’s barely had screen time this season, except to provide intermittent, vaguely sexual commentary—invites the women for a dinner party in her newly-renovated house. Mainly because Lydia lives in the Melbourne equivalent of Christian Grey’s Seattle sex palace, but also because Gina and Gamble aren’t there to cause drama, talk at the dinner table is—you guessed it—sex-related. “I have become very, very well-versed in erectile disfunction medications, and the time that they take to work,” Janet declares.

Then a professional chef serves everybody a fancy cigar-shaped dessert, and Pettifleur demonstrates how to “suck the cream out”:

It’s almost time for Pettifleur’s party, and let’s just say there’s a bitch that needs to be switched when it comes to the way she’s treating Chyka’s party-planning staff. The trees lining the entryway are too “florist” and not enough “winter wonderland.” The flowers are cream-colored, and certainly not white enough to create the illusion of snow. The enormous moon dangling from the ceiling isn’t at the right height for Pettifleur’s rumba performance—because oh, yes, that’s happening, too.

Meanwhile, Janet goes to visit her old pal Manuela, who also happens to be my BFF. Their conversation about Janet’s dating life soon turns into a Women’s Studies 101 class, as Janet reveals how nice it is to be able to lie down at 6 o’clock with “no asshole there that wants to watch the football while I’m watching television and wanting to go to sleep.” Preach, sista.

But their topic of conversation switches, and no. No. NO!!! Manuela wasn’t invited to Gamble’s hen’s night, and she thinks it’s because Gamble knew Manuela had heard about the sex rumors. NOT THE SEX RUMORS. NO. NOT AGAIN. Though perhaps I should have known this season couldn’t end without one more screaming fight about whether or not Gamble once had a sex party in her backyard.

Despite Pettifleur’s incessant kvetching, the party looks beautiful. Unfortunately, I can’t say the same for the party guests’ behavior, which gets bad—fast.

“No seriously, fuck you,” Gamble retorts. “Get laid. Why don’t you get fucking laid?”

Oh god—now Janet’s here, too. “Just for once, fucking shut up and listen!” she screams at Gamble. “I told you, regrettably, about a bullshit rumor that is bullshit!” Holy shit! This is intense. I almost don’t care that I’ve heard the same argument 98723046203 times. Season 2 is going out with a bang!

And wait—oh my god. I forgot this evening is also featuring a dance performance by Pettifleur. But then, all of a sudden, there she is, clad in a sparkly rumba costume and posed next to some hot dancer man. Who is this hot dancer man? Party guests and Bravo viewers alike brace themselves for a total trainwreck, except Pettifleur actually turns out to be an awesome dancer. “It just oozed love and sensuality. Woo woo woo,” Lydia helpfully observes.

Just when I thought I’d escaped a terrible bout of second-hand embarrassment, it hits: Now, inexplicably, there’s a clarinet performance that everyone must watch, and Pettifleur dances alongside said clarinet player, eyes closed, as if possessed.

But this is the season finale, which means THE DRAMA AIN’T OVER, FOLKS. Over in a corner, Gamble asks Gina where the rumors about her make-up artists doing make-up for strippers came from. Jackie, still on a mission to expose Gina’s true colors, reminds Gamble that Gina once said she wanted to throw the new Housewives under the bus—and then lied about it. Gamble doesn’t believe Jackie, but Jackie insists she never lies. I hope this is true, because Jackie once told me my hair and boobs looked nice.

And then Gamble makes a fatal error: telling Jackie she’s “worried about her psychic thing” and doesn’t know “if the voices are telling you the truth or not.” Gurl, you did not just say that! Jackie explodes, accusing Gina of putting those ideas in Gamble’s head. Gina, meanwhile, says Jackie has “dilated pupils”—is that Australian for crazy eyes?—and storms off. Bye Gina.

Gamble, Jackie and Janet are ~so over~ the party, too. Pettifleur’s pissed that everyone’s leaving early, but eventually announces, “Screw those bitches. We’re partying!”

She celebrates the rest of the party as one ought to spend her 50th birthday: dancing uninhibitedly in a sparkly dress in front of a mountain of desserts. 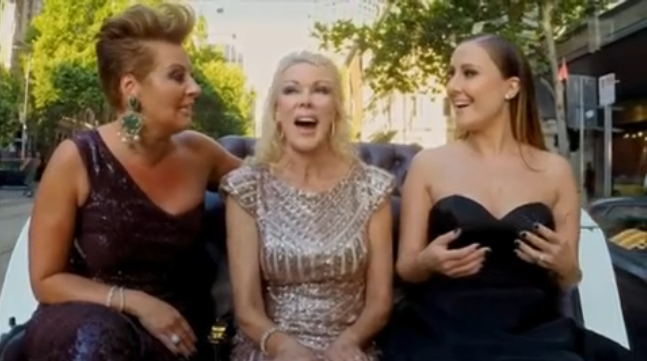