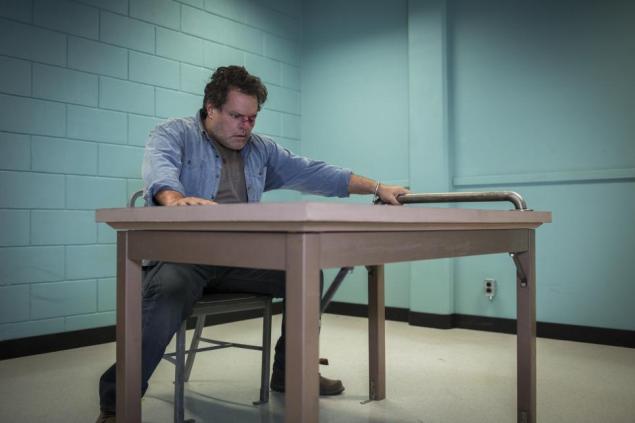 Dangit, you just can’t get rid of the Returned. You can drown ‘em. You can hit ‘em in the head with a tire iron. You can even force ‘em to confront their past by taking them to their childhood home where they were shot dead while hiding in a closet during a burglary gone wrong. But them Returned are gonna keep comin’ back ’til they get what they want, I tell you what.

And what do they want? Until now, The Returned has shown us how the living dead have attempted to reinvent themselves. Given a second chance (or in some cases, multiple chances), these unmoored souls want more than anything to turn themselves into the sort of people they always wanted to be. In the season’s final episodes, we see how those efforts quickly fall apart. To paraphrase Donald Rumsfeld, “you return from the grave with the personality you have, not the personality you might want or wish to have at a later time.”

Death has thus far been kind to Camille. Ever since she outed herself at Peter’s paranormal show-and-tell session, the exposure has been a huge weight off her shoulders. She even reconciles with Lena, who manages to stumble home to give Camille a big hug and tell her how sorry she is. Miraculously, her spontaneous stab wound is healing, though Lena still feels compelled to say something to the effect of, “I think this wound is a metaphor for the guilt I was carrying around.” That’s not an exact quote, but I swear, it’s damn close. No word yet on whether that dead horse is going to return in season two.

Simon has also made his peace with Rowan and forgiven Tommy for shooting him in the chest. Now re-Returned, Simon bursts out of the morgue drawer where he’s awaiting re-burial, but rather than seek vengeance, he appears just long enough to say goodbye. Then Simon skips town, leaving Rowan and Tommy to enjoy their wedding reception at the Dog Star. It totally reminds me of that time the gang threw a wedding in the bar on How I Met Your Mother, a show I’ve never seen, but I assume at some point over nine seasons, at least two characters got married in that bar.

Naturally, there’s a big twist that sends these happy endings spinning out of control, and its name is Peter, who we learn is 29 years dead himself! Peter’s deceased-ness explains his uncanny ability to identify and relate to the rest of the Returned, and with Camille now out in the open, Peter decides it’s time to reveal his true nature to the community. It does not go well. Next we see of Peter, Tommy is arresting him on the grounds of “I don’t know if we can detain a dead guy but he sure as hell isn’t going to ruin my wedding day.”

With Peter behind bars, the final hour of The Returned’s first season sees things going south in a big way for pretty much everyone. Camille and Lena’s newfound sibling affection quickly fades when Camille becomes the cooler sister, simply because she’s dead. “Cool” is relative here, because this show’s depiction of adolescence is straight out of an 80s anti-drug ad. The first thing Camille’s new, older friends do is offer her shrooms, which she happily gobbles down while Lena stands by clucking, “Are you giving her DRUGS?” The shrooms have no effect on Camille’s zombie brain, but they do trigger a psychedelic freakout in her friend Hunter, who slashes Camille with a knife to determine whether she’s real. This all happens to the strains of the Velvet Underground’s “Venus in Furs,” which I’m fairly certain these kids have never heard before.

Speaking of music, Rowan and Tommy share their first dance as a married couple to Cat Stevens’s “Wild World,” a song whose lyrics describe a woman leaving a man behind. I mean, I know this was a hastily planned wedding, guys, but could you maybe have come up with an even less appropriate song? A father/daughter dance, maybe, but your first dance as a couple?Thankfully, none of the guests have a chance to comment because the wedding is brought to a grinding halt by Lucy, who’s still hearing messages from dead townsfolk like she subscribes to their podcast. She delivers a warning from the father of Rowan’s unborn child. “He’ll be here soon,” she says, creepily stroking Rowan’s belly, “and when he comes, you have to listen.” Whoa, hey, sorry for interrupting your blessed day. Let’s cut the cake!

But in the world of The Returned, nobody out-creeps Victor. Turns out that Julie is just the latest in a long series of foster moms Victor has glommed on to. In his many incarnations, Victor has repeatedly been taken in by kind, lonely women, only to be rejected when those women realize their adopted child is a weirdo ghost kid who kills people with his mind. Julie breaks the cycle by bringing Victor to the site of his murder. Confronted with the memory of his death, Victor promptly vanishes, leaving Julie free to continue her lesbian love affair with the cop Victor most recently tried to kill. At the same time, Helen’s plan to destroy the town could not be going more swimmingly. She cozies up to yet another dam engineer (some women just have a type), and manages to obtain both a sackful of dynamite and direct access to the dam’s most vulnerable support beams.

By the finale’s end, there’s a hell of a lot going on in the sleepy mountain town of Caldwell. And though I understand the need to keep the audience salivating until season two, it’s a little disappointing how messy the season finale feels. The show’s early episodes were quiet and slow, focussed on how the mundane details of these families’ lives are changed by the reappearance of their loved ones. The final hour loses that intimacy in its rush to lay out a bunch of new Big Mysteries. What will become of Peter? Why is Victor so much more powerful than the other Returned? Why does he leave Julie instead of killing her, as he did to his previous moms? Do Simon’s visions of the flooded town mean Helen’s plan is unstoppable? Why is the water black? Does nobody clean the sewers around there?

The Returned works best when it keeps its scope small, but we’ll have to wait for season two to find out if the writers can answer all these questions while still servicing the close-knit mountain community so carefully sketched in the show’s early episodes. While we wait, here are a few of the biggest questions left unanswered by the season one finale.

Which Caldwell town official is in charge of ribbon cuttings?

Because with Adam back to his snarling, flesh-biting self, that means an imminent re-opening of the Caldwell Murder Tunnel. Somebody sharpen up the Deputy Mayor’s giant novelty shears, tout de suite.

So is Victor gone for good, or…?

We do get one final glimpse of Victor, newly reincarnated on the road outside of town. Yet another gullible single lady stops to help him out, and Victor and New Mom #26 are last seen driving past a strategically placed NOW LEAVING CALDWELL sign. Is Victor expanding his search for his fairy godmother, or will he return home to punish Julie for realizing the kid is a fucking psychopath? Either way, the poor lady who picked him up is going to regret the day she ever had a maternal instinct.

Did nobody notice there was a suddenly a freshly dead body missing from the morgue?

It’s someone’s job to be on top of that sort of thing, right?

Seriously, what is up with the wifi in Caldwell?

In an earlier recap, I joked about how every teenager in town seems to be completely uninterested in the Internet. But unless there is some kind of major wifi outage, there’s no way this show takes place in “Present Day,” as its chyrons would have you believe. A bunch of millennials spend the entire day with a dead girl, and no selfies are taken? Not a single person Instagrams or Snapchats? It’s weird. Camille does mention that some kids have been ghost-shaming her online since she exposed herself (“Sorry I blasted you on Facebook,” says Hunter, which I’m not sure is really a thing kids say), but otherwise the Internet and social media are entirely ignored. Hilariously, the first media vulture to come snooping around Caldwell works for something called “Truthvox,” which seems to be some kind of upstart blog/podcast. (“You’re a reporter,” Claire says to her. “Journalist,” she corrects.)

There’s some sort of overarching cosmic bullshit, isn’t there?

Intrepid Ms. Truthvox has done her research. She tells Peter that the dead have reappeared like this many times before, and each time, it was just before the place was wiped from the face of the Earth (she gives the Roanoke Colony as an example). Is Helen right? Is there something inherently wicked about Caldwell, or is the town merely one small battleground in the eternal war between good and evil? One thing is certain: when the dead walk again, it’s hard to get by just upon a smile, girl.

God, that is a terrible wedding song. 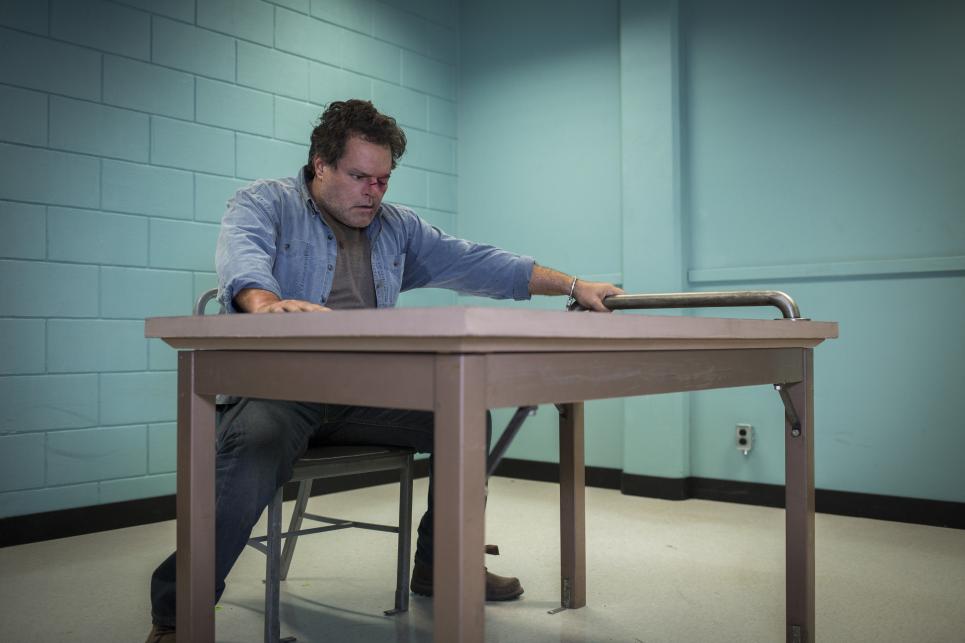