In the next few years, the battle to end homelessness among veterans may finally be won. Numbers have declined from over 75,000 in 2010 to less than 50,000 today, and more than 300 mayors have pledged to defeat this scourge by the end of 2015. It is one of the few areas of agreement between the President and Congress. Dozens of non-profits exist to fight the problem, and for everyday citizens there is a 24-hour VA hotline for those who want to help.

The success of this effort has come at a moral cost, however. Even as numbers of vets on the street have fallen, the public sees veterans overall as especially vulnerable to homelessness. Part of the reason is that it is visible. Other issues affect vets in far greater numbers, but those sleeping under bridges are an unavoidable reminder that our system has failed in some places. In Los Angeles, where I live, I regularly see the homeless staking out intersections and parking lots. Judging by the cardboard signs they carry, many appear to be veterans.

I make an effort to talk with them, usually a quick conversation through an open car window, waiting for a light to change. Sometimes, I offer to buy a meal. A few weeks ago I shared a bag of fries with a homeless man named Eddie. He grabbed my attention when he asked, “Sir, can you spare some change for a veteran? I need to catch a bus back to the VA.” Eddie’s appeal was a variation on a familiar refrain – the hard-luck vet in need of a little help. I replied as I usually do. “I’m not going to give you cash, but if you’re hungry I’ll get you something to eat.” So Eddie and I wound up on a wooden bench outside of Five Guys.

It turns out that Eddie was not in the military. Though I barely challenged his story, he was not shy about coming clean. In fact, Eddie was proud of his success in getting strangers to part with their money. I have met others like him. I do not begrudge their approach to panhandling – their lives are tougher than mine and anyone naive enough to fall for the ruse can probably spare the cash. But when the media gets played, I take exception.

Questioning a homeless person’s veteran status has become strangely taboo. In an incident captured on camera in January, VA Secretary Bob McDonald encountered a homeless man who said he served in the Special Forces. The Secretary, in what he later claimed was an attempt to connect emotionally with the man, said he too was in the Special Forces (he did graduate from Ranger School, but did not serve in a SF unit).

The ensuing media frenzy focused entirely on the Secretary’s well-intentioned exaggeration. Some pundits, like Jon Stewart, tried to redirect attention to what they felt was the greater scandal, that a Special Forces veteran was homeless. No one thought to investigate the claim that instigated the scandal – that this person had served in uniform, much less in an elite unit. The entire media establishment, and almost every veteran service organization, took that at face value while excoriating the Secretary of Veterans Affairs.

The fact is that fewer than one in ten homeless people are vets, so the probability of encountering one is fairly low. Yet in a recent study, nearly half of Americans, when presented with a picture of a homeless man in civilian clothing, said he was “likely to be a veteran.” This knee-jerk sympathy, exacerbated by an uncritical media, has real consequences for how America views veterans.

Some do need help, and too many are still homeless. But overall, vets are more likely to be employed, to volunteer, to be involved in civic groups and to fill leadership roles in community organizations. They vote at significantly higher rates than their non-veteran counterparts.[4] And some of the most effective efforts at getting the 49,000 remaining vets off the streets, such as the pioneering work of the Zero: 2016 movement, are being led by fellow veterans.

No one should have to live under a bridge or over a subway grate. For veterans, it is more than good social policy to have access to housing. We owe them a debt. So the reluctance to challenge a homeless person’s claim to be a vet is understandable. Part of it is simple human decency, the desire not to add insult to injury. But part is unconscious bias, one that feeds misconceptions about veterans and has the potential to do lasting damage.

There is not a vet I know who thinks this reflexive sympathy is a healthy thing. It undermines the vast majority of us who are productive members of our communities. Sitting on that bench with Eddie, I told him I served in the Navy. He smiled wide and shook my hand, and said he was honored to have shared a meal with me. If only the average American displayed that kind of sincerity.

Ken Harbaugh is a former Navy pilot. He served as an electronic warfare mission commander and taught naval history at The Citadel. Following his military service, Mr. Harbaugh co-founded The Mission Continues, a nonprofit that empowers veterans to serve in their communities. 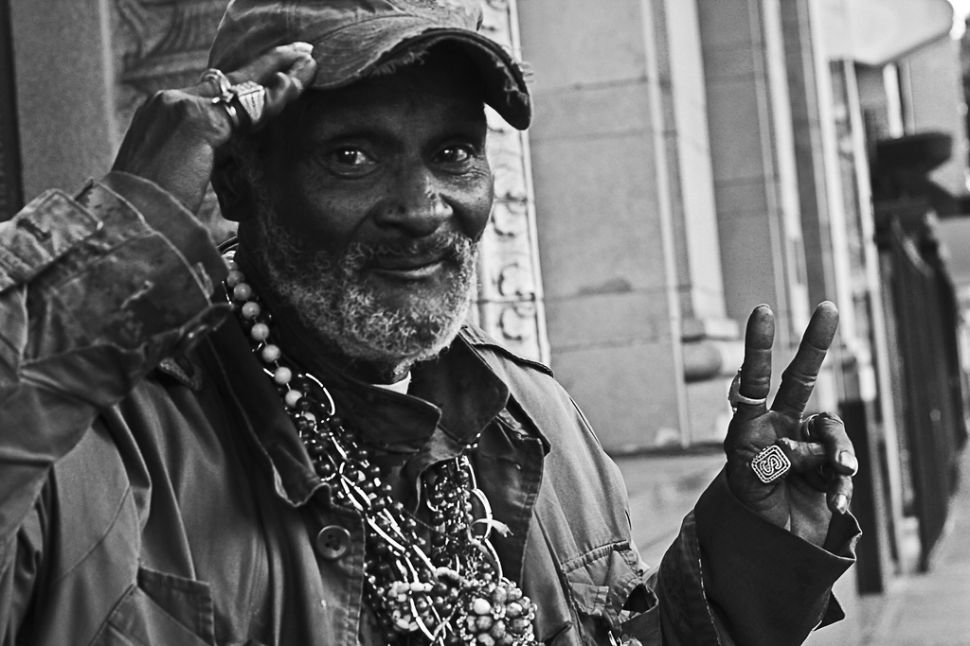