The firestorm surrounding the disclosure that ABC host George Stephanopolous made and failed to disclose donations to the Clinton Foundation—while he was covering the Clinton for President campaign and the controversies surrounding donations to the Clinton Foundation—dramatizes a syndrome of secrecy and conflicts of interest that have brought widespread public disapproval against politics in Washington and leading institutions of the mainstream media.

This syndrome of secrecy and conflict of interest involves a long list of dirty little secrets that Washington insiders do not want the American people to know. They create subtle but deep corruptions at the intersections money, politics and media that violate core notions of American democracy by establishing subterranean channels of influence that distort the integrity of our public debate and the integrity of the daily decisions of government.

Mr. Stephanopolous did not necessarily seek any particular influence with Bill or Hillary Clinton beyond his power as a major media figure. But his donations clearly create a conflict of interest. They should have been fully and immediately disclosed. He should have recused himself from reporting about any matters regarding the Clintons that would have inevitably been tainted in the eyes of many Americans by his then-undisclosed donations.

There is much hypocrisy in the public debate about the Stephanopolous affair, which is symptomatic of far larger corruptions created by interlocking interests of money, politics and media.

The backlash against this syndrome of insiderism transcends party and ideology. Criticisms of this syndrome have been offered in various ways by progressive liberal populists, many tea party supporters, reformers such as Ralph Nader and libertarians such as former Texas Republican Congressman and presidential candidate Ron Paul. Public disapproval abounds. According to the summary of polling from Real Clear Politics an astounding 75% of Americans disapprove of Congress. According to Gallup polling of institutional credibility, television news ranks near the bottom along with Congress. Imagine going to a baseball game with 40,000 fans in the stands and 30,000 of them are booing the home team.

Having been involved in both high-level politics and media for many years, let me suggest some of the dirty little secrets that powerful insiders do not want Americans to know.

Dirty little secret 1: Why do politicians never seem to get the memo from dissatisfied voters? Here’s why: the political system is rigged so that 90% of Congress is re-elected no matter what voters think, and even when presidents Bush and Obama became highly unpopular they were both reelected to second terms by spending lots of money on negative attacks against their opponents. One reason so many Americans hate politics is that voters believe they are being played for suckers by politicians who don’t really care what they think, and as long as politicians believe they will be reelected no matter what voters think, this dirty little secret will continue.

Dirty little secret 2: Most Washington insiders believe that what voters don’t know can’t hurt them. The Washington credo, like a secret handshake in a closed club, is to keep the bad stuff secret from voters.

Take the current trade negotiations in the Trans Pacific Partnership talks and the negotiations between the president and Congress about fast track legislation that would allow any final trade pact to be voted on without any amendments being allowed. Despite the fact that this trade deal will affect countless jobs, wages, and salaries for a generation the provisions of the trade talks are being classified as secret information and the deal is being done with secrecy more reminiscent of the Soviet Politburo under Leonid Brezhnev than the American democracy envisioned by Jefferson and Madison.

Anyone who discloses these secrets to voters or the press could be prosecuted and imprisoned like violent criminals and foreign spies!

Dirty little secret 3: I have spent years in the backrooms where these kinds of deals are done. The highly paid lobbyists who influence what is included in these big-money deals, who make large campaign donations to the politicians who make the deals, will go to parties and not prison when they find out what the voters will not be told. This does not mean the trade pact is good or bad. It means the game is fixed by this dirty little secret insiders do not want voters to know.

Dirty little secret 4: Remember when President Obama announced with great fanfare that he would bring a new era of openness and transparency to Washington and make public the White House visitor logs to reduce the backroom influence of lobbyists? What happened? Many of the White House staff simply moved their lobbyist meetings to cafes and hotels outside the White House so they would not show up in the White House logs and the public would never find out about them.

Dirty little secret 5: When many of these same White House staff, and executive branch staff, and Congressional staff hold these meetings with lobbyists, they bring their resumes and end up working for the lobbyists to make as much money as the lobbyists do!

To paraphrase an old song, birds do it, bees do it, and Democrats and Republicans shaking money from trees do it. Obama is no better or worse than previous presidents on this front, but he promised to bring change we can believe in while this dirty little secret continues.

Dirty little secret 6: When you watch political talk shows on television and see Democratic “strategists” and “consultants” breaking rhetorical bread with their Republican peers about the great issues of the day, this dirty little secret is that many of them make lots of money from special interests that pay them to lobby or propagandize to make you think that what they want is in your interest. How many times have you ever seen their interests disclosed to viewers, readers or listeners?

Dirty little secret 7: Almost every day brings forth a major analysis of a front-page issue from a “prestigious think tank.” What we are almost never told is that most of these think tanks receive huge donations from friendly and unfriendly foreign governments, giant foreign and domestic conglomerates, and wealthy political ideologues designed to influence our public debates (and government actions) in ways that are kept secret from voters, viewers and readers.

Several months ago the New York Times published a detailed investigative story listing a number of these think tanks and the sources of their largest donations. When commentaries and analyses are offered by experts who take substantial sums from special interests, shouldn’t we know who pays them to influence us?

Don’t get me wrong. Many think tanks produce high quality work that deserves to gain influence. I would cite the liberal-leaning Center for American Progress and the conservative-leaning American Enterprise Institute as often offering superb analysis from different points of view. There are others. But there is also propagandistic work by “experts” paid for by special interests with ulterior motives. I propose this money and these interests should no longer remain a dirty little secret.

Dirty little secret 8: Special interest groups frequently arrange wonderful visits for government officials to “conferences” in exotic locales such as magnificent ski slopes and beautiful clear beach-front resorts. These are the moral equivalent of donating expensive vacations to public officials, accompanied by lobbyists and “policy experts,” enjoying first class treatment during influence peddling “seminars.” I hereby confess. When I worked for Democratic leaders I was not a stranger to these events. In those days taking cash was legal. I always declined the cash but accepted the good times and pretended to listen to the lobbying pitches while I savored the lobster and filet during this dirty little secret that would best be ended.

I worry about the future of our democracy and whether we are becoming a nation run through backroom deals conceived by a shadow government hiding dirty little secrets. Ben Franklin said the Founding Fathers have bequeathed us a democracy, if we can keep it, and we are not doing the best job of it.

Let’s demand a new era of sunshine, disclosure and change we can truly believe in. What George Stephanopolous did was wrong and should be harshly criticized, but he has lots of company.

Whether we are liberal populists, principled conservatives, tea party patriots, genuine libertarians or hard-pressed taxpayers trying to make ends meet let’s agree to end the dirty little secrets once and for all.

Brent Budowsky formerly served as policy aide to Sen. Lloyd Bentsen (D-Tex) and Legislative Director to Rep. Bill Alexander D-Ark.), then Chief Deputy Majority Whip. He holds a law degree from Catholic University, and an LL.M. degree from the London School of Economics and writes a weekly column for The Hill. Email him at brentbbi@webtv.net 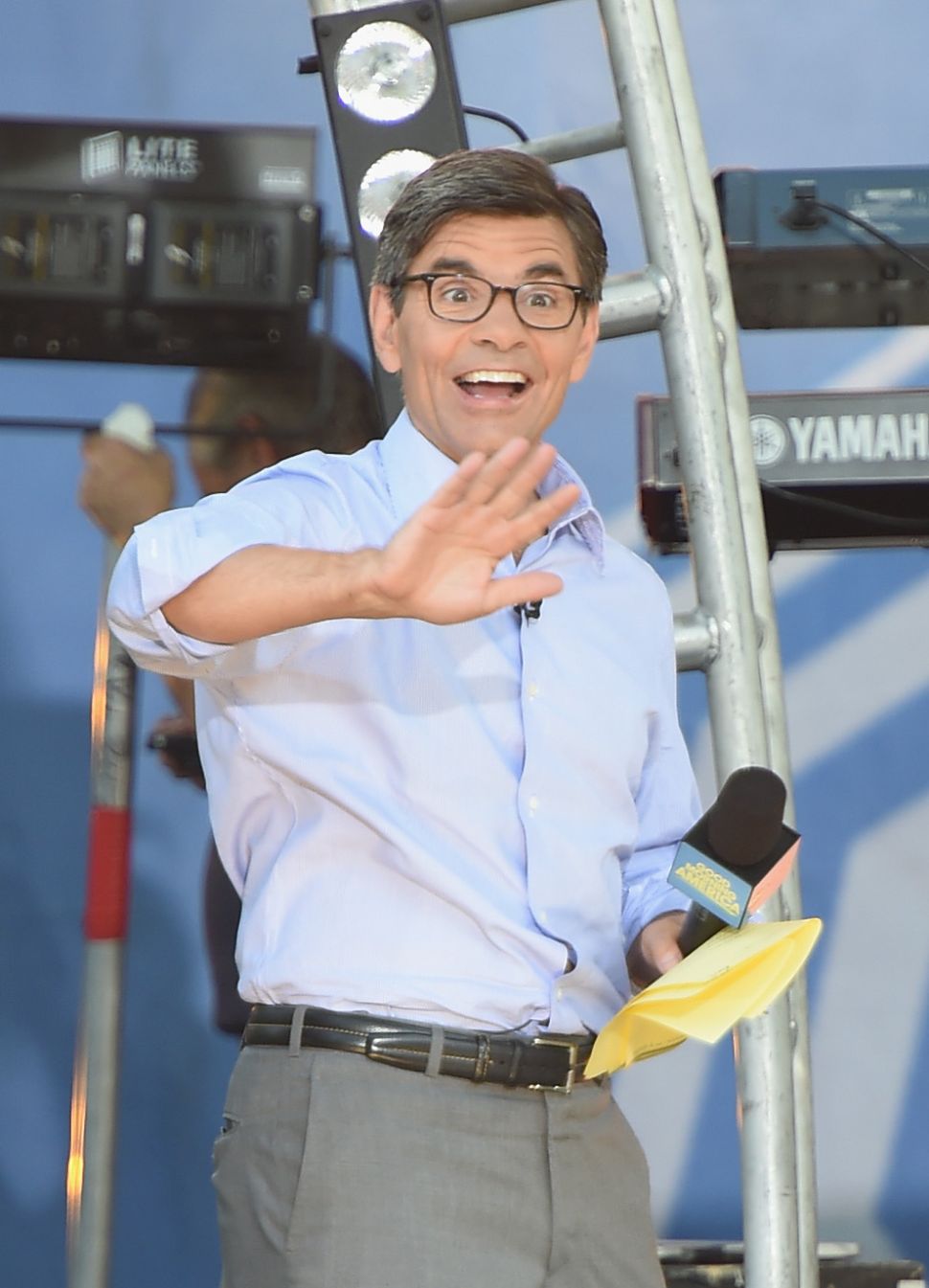