In 2008, Amsterdam’s Stedelijk Museum lost a legal battle to keep artworks that had been on extended loan to its collection for a half-century. The treasures included Suprematism, 18th Construction, a work by Kazimir Malevich, considered by many to be perhaps the greatest Russian painter. Returned to a large group of Malevich heirs, the work will now go on the auction block at Sotheby’s in London June 24 and could set the record for the artist. It carries a price estimate of $30 million to $45 million.

At first glance, the artwork looks simple, ‘Minimalist’ at best and certainly not worth the price. But Malevich, leader of the Russian avant-garde, inspires a cult and a passion unlike almost any other artist and is credited by some as something of the inventor of abstract art. In advance of the auction, the work will make a brief global trek, stopping first in Hong Kong from May 28 to 31 and then making its way to London, where it will go on public view for nearly a month. Even by those not trying to sell it, it is considered a masterpiece.

The painting represents one of Malevich’s most significant paintings of his ‘Suprematist’ style canvases ever to appear at auction, hailed by Sotheby’s auctioneers as the ‘Epitome Of Revolutionary Abstraction.’ The 53 by 53 cm oil on canvas was first shown in St. Petersburg just under a century ago. But the final selling price might be even higher. In 2008, a painting from the same period sold for a record $60 million at Sotheby’s New York.

The first Suprematist works were shown together in a revolutionary exhibit, entitled The Last Futurist Exhibition: 0.10, in St. Petersburg at the end of 1915. The exhibition transformed the art world in the early Soviet period, ultimately giving rise to Constructivism. The styles Suprematism and Constructivism crossed over into architecture, theater and other art forms, and was advanced by artists like Ilya Chashnik, Ivan Kliun, El Lissitzky, Liuboy Popova, Aleksandr Rodchenko, and Olga Rozanova.

Malevich was born near Kiev, the eldest of 14 children, and studied art in Moscow.  He died at 56, of cancer, in what was then called Leningrad, after establishing a philosophy of art that linked painting to something spiritual.  In a booklet entitled From Cubism and Futurism to Suprematism, Mr. Malevich laid out the tenants of his liberating artistic form, which emphasized the purity of shape and the absence of political and social meaning. Using the elementary shape of a square, Suprematism acknowledged that the study of the external world was inadequate for the basis of art. Mr. Malevich later merged the square with other geometric shapes throughout his works, using a palette of blacks, whites, grays, reds, and other colors.

He lived long enough to have his work become internationally famous and acclaimed, but, under Stalin, his art was critiqued as being anti-nature, and works were destroyed.

That led him to store some of his works in Germany and that in turn led, decades later, to a convoluted lawsuit in U.S. District Court in Washington, D.C. in 2007. “Due to the political situation in the Soviet Union during the latter years of his life,Malewicz entrusted a large number of his paintings to friends in Germany, where he had gone to show them, for safe keeping. In 1956, after Malewicz’s death and the end of the Second World War, the City of Amsterdam’s Stedelijk Museum (“the City” or “the Stedelijk”) acquired some of those paintings from one of the persons to whom Malewicz had entrusted them. In 2003, the City loaned the paintings to the Guggenheim Museum in New York and the Menil Collection in Houston, Texas (“the American Museums”). While the paintings were being exhibited in the United States, Plaintiffs filed this suit against the City alleging that the Stedelijk’s acquisition of the paintings in 1956 was unlawful.”

Suprematism, 18th Construction’s arrival at auction represents only the third time in 25 years a major work by the artist from this period has ever been sold at auction. 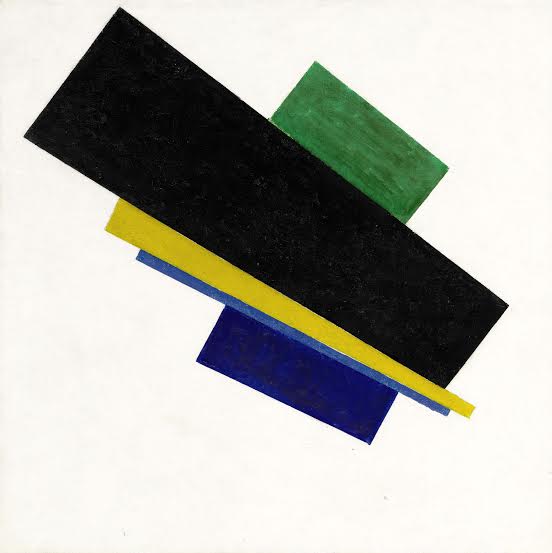