It’s no secret that the Nazis were art lovers. They backed many select contemporary artists and filmmakers of the era, and as they occupied sections of Europe they stole countless masterpieces from museums, collectors, and dealers along the way—much of that stolen art is only now being recovered and returned.

The Wall Street Journal reports that last week a police raid in the small German town of Bad Dürkheim revealed up to nine sculptures by Nazi court artists that had been stashed away in a warehouse. The works are now part of an investigation and an attempt is being made to trace the artworks’ ownership since the end World War II.

The event has shined a light on a small sect of collectors involved in buying and selling Nazi artworks and artifacts that have, until now, remained largely hidden. According to the Journal, a large amount of art commissioned by the Nazis for propaganda purposes has been destroyed over the years, and what remains is usually never shown, or only included in historical exhibitions. But, as it turns out, there are collectors out there willing to pay big bucks for those works on the black market.

Among artworks recovered in the warehouse were two large-scale sculptures of horses by sculptor Josef Thorak that once stood outside Hitler’s Chancellery in Berlin. Until the raid, their only other known location since the war’s end has been at a Soviet military base in East Germany, where they were stored for 30 years until they disappeared after Russia withdrew from the area. The Journal‘s Harriet Torry and Andrea Thomas write that the sculptures recently popped-up “via middlemen on the clandestine market for Nazi-era art” for a hefty price tag of €8 million ($8.8 million).

The Journal notes that while the display of Nazi paraphernalia is banned, objects can still be traded, and Nazi-commissioned artworks are allowed to be bought and sold as long as it can be proven they were not stolen. In the case of Thorak’s horses, the works were commissioned by the state and remain property of the German government. A spokesperson for German minister of culture and media told the Journal that they once the ownership is verified, ministers are in favor of exhibiting them in a show about Nazis’ use of art for propaganda.

Arthur Brand, co-owner of Artiaz, a company that investigates forgeries and looted art, said to the Journal, “Spain with its fascist past is quite easy and Italy is easy [to trade in National Socialist memorabilia], but in Germany it’s a very secret market.”

Though most galleries and auction houses shy away from showing and selling works by Nazi-era artists, a few have made it onto the market and into major exhibitions despite their taboo political pasts. Leni Riefenstahl’s film Olympia was the final work at the end of the Guggenheim’s spiral ramp in its 2011 show “Chaos and Classicism: Art in France, Italy, and Germany, 1918-1936,” and can be purchased on DVD along with many of her other works. And several bronze sculpture by Fritz Klimsch are headed to auction at Ketterer Kunst München, Lempertz, and Van Ham Kunstauktionen in June. 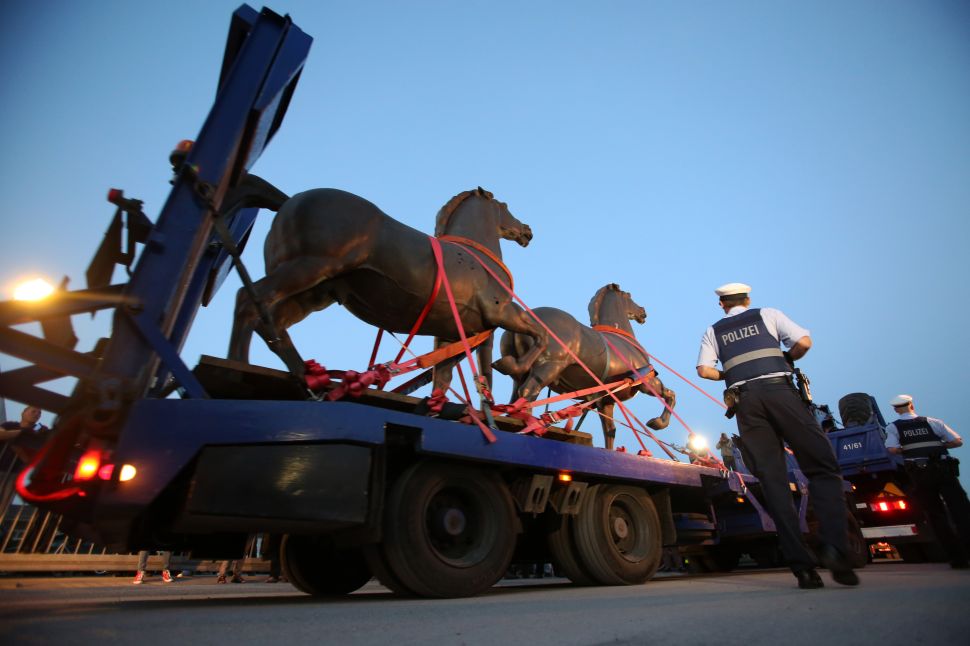