Words are important. In fact, the world was created with a word. When we are fearful of using words we diminish the very thing we are trying to define, we corrupt its reality, we distort its truth.

Terror is terror. And the act of instilling fear in order to achieve political or religious objectives is, just that, terror.

So what do you call a terror attack when it takes place in suburban Dallas?  I would hope that it would be called what it is—a terror attack. But not in Dallas 2015. The heinous terror attack perpetrated in Dallas on May 4th was generally called “an attack” by the media. An attack, just like any other of a multitude of attacks. it was a called an attack by almost every single news outlet. And not just by politicians, always mindful of the next election. Radio, TV, print, the internet—almost every media outlet bought into the whitewashing of Dallas. Even after it was made perfectly clear that the perpetrators were Muslims, protesting an event that they found crude, tasteless and demeaning, it was still only described as an attack.

What’s the problem with using the word “terror.” This was Muslim terror. Simple as that. The reason the word terror is left out of a description in which it really belongs is fear. It is the fear of ruffling the feathers, of antagonizing, of insulting, of scapegoating even, the perpetrators of the act.  But that wasn’t the case in Dallas.

In Dallas the word terror was left out of the equation in an effort to discredit and to blame not the perpetrators of the attack, but the people who came under attack.  Many pundits and many other members of the press sincerely thought that the targets of this attack brought the danger on themselves by sponsoring a “draw Mohammed cartoon competition.”

CNN – “2 shot and Killed at Mohammed cartoon Contest” May 7, four days after the terror attack

Reuters — “Gunmen in Mohammed Cartoon Attack Monitored For Years” May 4

MSNBC — “The Garland Shooting: What We Know” May 5

NPR — “ISIS Takes Credit For Shooting in Garland, TX” May 5

Fox 6 — “FBI Increases Monitoring of Suspected ISIS Supporters in Wake of Attack in Garland, TX” May 10

That gunmen perpetrated an attack against a conference on freedom of speech that chose to use a competition calling for cartoon depictions of the prophet Mohammed as the forum for their conversation was not deemed “terror” worthy.

To all those who do not understand this, let me paint the picture for you. Drawing a picture—of anyone or anything—should not entitle someone else to murder you. And that was the entire point of the conference and the competition.

It was not about art. It was about the freedom to draw. To think and to express those thoughts.

When Voltaire said “I do not agree with what you say but I will fight to the death your right to say it”  I am sure he thought his words and conviction would live on. They died, in Dallas, May 4, 2015.

We can assume that the terrorists were upset by the depictions and by the competition. That was their right. We can assume that they wanted to defend the honor of the Prophet. That, too, was their right. But their rights ended when their guns came out, when their shots rang out. Their rights ended when they, just like the terrorists in Paris who attacked Charlie Hebdo, used guns as their defense tool.  But unlike the French, who called  the heinous act for what it was, we Americans were too scared, too politically correct, too narrow-minded and blinded by tunnel vision to call it an act of terror.

And important question to ask is: What so irks Muslims about the portrayal of their prophet in art? One might think that the answer lies in disrespect for the Prophet—and that indeed might be the basis for the anger played out in Dallas. But it is not the reason for the Islamic prohibition against depictions of Mohammed the Prophet. In fact, during the Middle Ages, Muslim art was replete with images of Mohammed. In most of those depictions, however, the faces were blurred.

The reason for the prohibition is a direct reaction against paganism.  In that way it is not dissimilar to the Biblical commandment against graven images.

Here’s a bit of background: Islam emerged out of a pagan society and believers feared that any depiction of the prophet would be worshiped. Which Islam rejects outright. In Islam, Mohammed was both a man and a prophet and he cannot be worshiped. Out of fear that followers would create icons and images and figures and then worship them—Islam forbade the creation of an image or the portrayal of Mohammed.

Today life is different.  It is an entirely different story. Portrayals and cartoons and caricatures are not icons and could never be construed as anything other than lampooning of their subject matter.  Where would late night television be without the art of lampooning?

The issue we were confronted with and chose, almost en masse to subvert, is a serious one. At issue is freedom of speech versus respect for Islamic sensibilities. Given the choice, there is no doubt that, in the West, freedom of speech trumps the sensibilities of any religion, not only Islam, and trumps, as well, almost every other value. 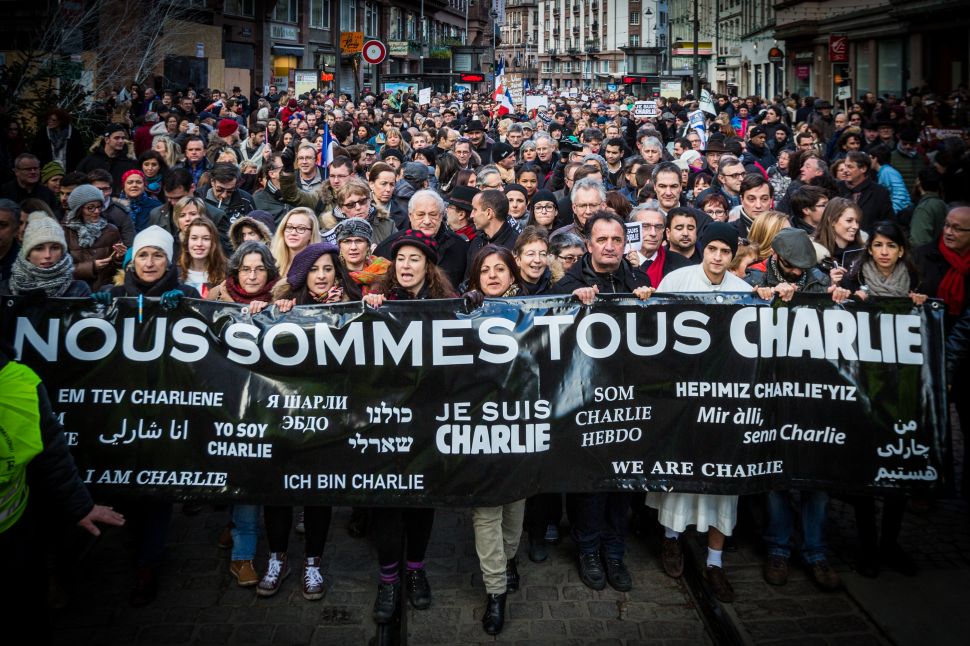