The Upper West Side has long been seen as the casually dressed, mature, intellectual cousin of its East Side counterpart. With its wide swaths of historic district and greenery on its eastern and western flanks, it has always been a bit removed from the rest of Manhattan. “It’s a sense of community and neighborhood up there that you don’t really find anywhere else in the city,” summed up Jeremy Swillinger, a broker with The Level Group. “A big motivator to go to the Upper West Side is the convenience, especially for having a family. You’ve got the school system, you have the parks, obviously, and then you’ve got the easy commutes on the red and blue line, and all the retail.”

To meet the demand in a neighborhood that’s perennialy been short of resale housing stock, developers have forged ahead both with new projects and rental-to-condo/co-op conversions in historic buildings, creating larger units to meet the demand of buyers, many of them with young families, who aim to stay in the city.

“It really comes down to the macro level of every city: nowadays, younger folks want to stay in the city for longer periods,” noted Mr. Swillinger.

Amenities: Access to the rooftop terrace with an outdoor fireplace, a fitness room, sports court that can be converted into a movie theater and spa, featuring two private steam rooms and a sauna. The building also features 24-hour a doorman/concierge and bicycle storage. Private parking is available for purchase.

Project: An HFZ Capital Group conversion of a landmarked building, the units are marketed by Corcoran Sunshine and feature renovated interiors by Pembrooke & Ives. The two- to five-bedroom units offer open floor plan living, with contemporary touches like oak herringbone floors and a stylish freestanding bathtub in the Italian marble bathrooms.

Project: Located at 100 West 80th Street, The Orleans is a turn-of-the-century gem by Buchman & Deisler. Developed by Orleans Realty and marketed by Halstead Property, this conversion project’s four- and five-bedroom residences currently on the market have views of the Museum of Natural History.

Project: Developed by Elad Group and Silverstein Properties and designed by Pelli Clarke Pelli Architects, this 42-story building will be the first and tallest condominium project to come to market in Christian de Portzamparc’s Riverside Center, four blocks from Columbus Circle. Each of the 246 one- to four-bedroom residences has an interior designed and curated by Jeffery Beers.

Project: Commissioned by William Waldorf Astor, The Astor runs the entire length of Broadway from 75th to 76th Streets, with the two South Towers built in 1901 and the North Tower dated to 1914. Restored by Pembrooke & Ives, the first offering in this conversion by HFZ Capital comprises 15 units, which range in size from one to four bedrooms, feature state-of-the-art interior enhancements to complement the prewar details that include working fireplaces and custom moldings.

Project: Developed by Samson Management, this conversion from rentals to condos by CetraRuddy architects included restoring the facade of the turn-of-the-century Neville & Bagge building at the corner of 84th Street and West End Avenue. Exclusively marketed by Halstead Property, the renovated three- to five-bedroom units include washers and dryers, marble slab countertops and backsplashes in the kitchen, white oak floors in a custom 30-inch square parquet-inspired pattern throughout dining rooms, living rooms and kitchens.

Project: Developed by Extell and designed by Goldstein, Hill and West, One Riverside Park has expansive views of the Manhattan skyline and the Hudson River. All 219 newly built condominium residences include floor-to-ceiling windows and interiors designed by Shamir Shah.

Amenities: More than 50,000 square feet of lifestyle amenities, including a 40,0000-square-foot athletic club and spa, with a 75-foot swimming pool, 38-foot rock-climbing wall, basketball and squash courts, two-lane bowling alley, and a golf simulator. Residents also have access to an indoor playground, function room with a full catering kitchen, private screening room, and a landscaped garden courtyard, as well as a 24-hour doorman and concierge service. On-site parking is also available. 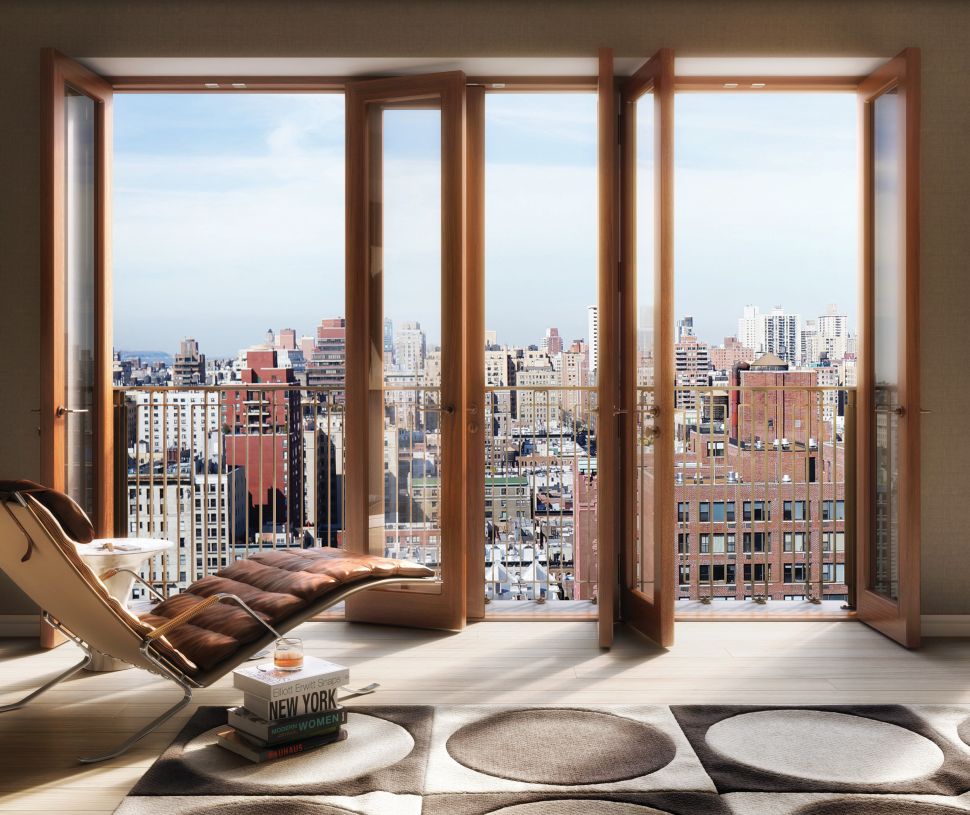 Filed Under: 210 West 77th Street, One West End, The Chatsworth, The Upper West Side, One Riverside Park