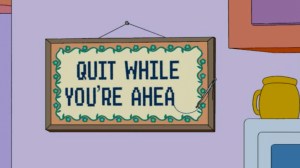 I lost my keys and was locked out my apartment. It was the middle of the night and I had nowhere to go. I left a message for the landlady.

I tried to climb up the fire escape to see if I could sneak in but I’m afraid of heights. About two stories up, I froze. I couldn’t move up or down. I was scared.

Finally I crawled down. I sat down by the curb. Did the landlady get the message? I didn’t know. All I could do was wait. Watch the cars go by. Smell the gas at the gas station next door.

Or I could take action.

Sometimes we can’t take action. I could’ve broken a window and crawled in. Like they do in TV shows.

But then maybe I would bleed and it would take a long tie to repair my window because I was lazy and broke.

Sometimes it’s better to sit on the curb. And wait. And say, “maybe she got the message”. Or say, “I can sleep like this for now and tomorrow I can even stay with a friend if I have to.”

Sometimes you have to give up.

It’s not so bad to quit. Sometimes it’s the most productive thing you can do to quit. So many times I felt like quitting things but I kept going until it was too late.

Until a cliff was reached. Until I fell off the cliff.

I know so many people who try and try and try even when all hope has long since left the room. Hope doesn’t announce it when she leaves the room. She just leaves.

I used to be in relationships where we both knew it was over a year in advance. Usually my fault. I didn’t trust her.

And then I would get paranoid. And then she didn’t like my paranoia.

And then I would trust her even less.

And then, of course, bad things would happen.

Sometimes it’s not so bad to quit. Sometimes you have to trust yourself that things are painful now but if you take action, things can feel a lot worse.

We’re an action jackson culture. We want to move, to dance, to execute. “Execution is everything!” “I take ACTION!”

Or, if it’s not working, we “PIVOT”, we “CHANGE!” It’s hard to just sit on the curb and wait for the landlady to show up with the keys in the middle of the night.

I had a business. When the economy went south we went from profitable to unprofitable. Then someone was caught stealing from the business.

Then we lost our lease.

Then we lost all our customers. Then the CEO quit.

They needed more money to survive. I was going to get squeezed out of the entire business even though I had put in a lot of money.

If I took action, I would’ve put in more money.

I didn’t put in more money (because I was dead broke actually).

The head investor called me into his office. “We’re all putting in money.

It looks really bad that you aren’t putting in money.”

I blamed my now ex-wife. “My wife says I can’t invest any more. I’m in too many investments.”

He knew I was lying. Smart people know when you are lying. And that was a pretty pathetic lie anyway. Blaming my wife on the 50th floor of a Park Avenue building filled with professional investors.

Meanwhile, the bank was foreclosing on my house. Meanwhile, I tried to get another loan from the bank with the intention of leaving the country.

Eventually I quit everything. The investment firm fired me. My old company that I had started fired me. I lost my house. I had to store almost all of my belongings to fit into the small house I moved into.

I stopped talking to all the business people I knew.

At what point in the rainbow does the red turn into orange.

I’ll never figure it out. But eventually it does. Eventually it changes but you can’t pinpoint it.

I started playing Scrabble at the local cafe. I met some good friends there. They are still my friends. I played backgammon with another friend who would come up from the city to visit me.

I started to write. I wrote every day. I wrote two articles a day. I made new friends.

Excitement creeps up. I feel it in my chest. Then my head. Then my legs want to wake up fast in the morning.

I raised money for another idea. It started to work out. I wrote down ideas every day of more things I could do. I started sending ideas to people and they would call me and ask me to help them.

A year later I was getting paid more for my articles, my first book came out, I raised more money for my fund. I started another fund. I started thinking about doing another business.

I was walking every day. I was writing ideas down every day. I suddenly had friends that I loved. I felt like I could be myself around them. That hadn’t happened to me in almost seven years.

When I fell and flipped over on my first ride on it, I couldn’t believe how happy I was when I was lying in the middle of the street and bleeding and both my daughters came running up to me screaming, “Daddy, are you ok!?”

I had to give myself permission to quit. Many times. Not just one.

But I waited and I built up from the inside. And my inside changed. And then suddenly everything on the outside changed.

I quit and I waited and I surrendered.

Surrendering is action. Surrendering to what you can’t control is the most powerful form of action. Quiet action.

While waiting on the curb I saw some metal in the grass. My keys.

Sometimes everything happens and you’ll never know the reason. But sometimes you can wait and the reason will peek out. It was hiding. It was somewhere you didn’t expect. But then it pops out!

James Altucher is a hedge fund manager, entrepreneur and bestselling author. He has founded or co-founded more than 20 companies, including Reset Inc. and StockPickr. He has written 11 books and for The Financial Times, The Wall Street Journal, TheStreet.com, Forbes and TechCrunch. 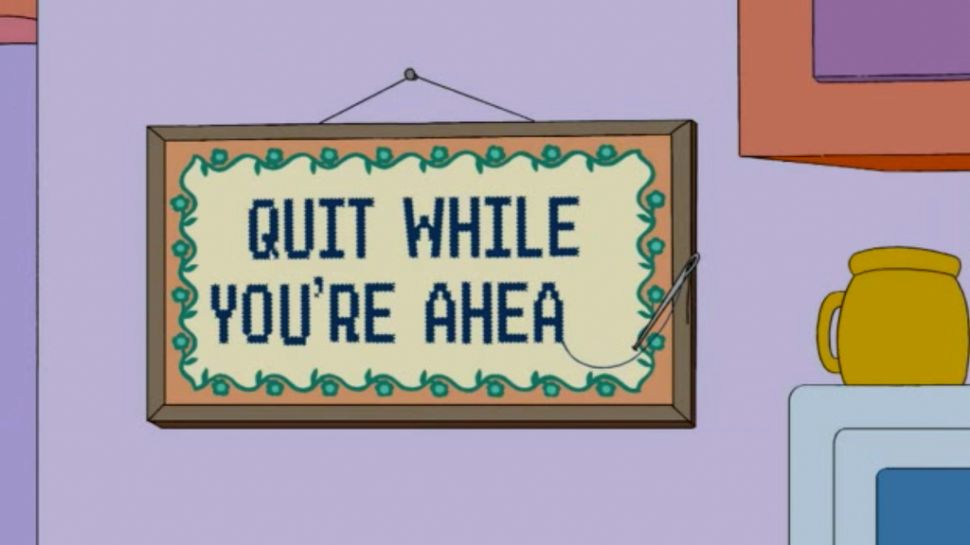