Uber drivers blocked off a small part of Beaver Street Thursday morning, as they protested the city’s Taxi and Limousine Commission’s Proposed FHV Dispatch Application Rules. Drivers are concerned the rules could hurt the company.

Today’s protest doesn’t come as a surprise—the TLC held the first public hearing for its plan, which was made public in April of this year.

Outside TLC headquarters, drivers from every borough could be seen wearing black t-shirts and holding up black posters emblazoned with the word “Uber” as cars behind them honked in support. Protestors gathered in a moving circle and relentlessly chanted in favor of the app-based transportation service in the midst of the humidity.

But inside the hearing upstairs, Uber drivers quieted down, as they sat next to yellow cab drivers and were faced with what the TLC wants—change.

Led by the TLC’s Assistant General Counsel, Ryan Wanttaja, the TLC presented its plans for ride-sharing apps like Uber, Gett, Via and Lyft. The plan, which will be voted on at a later date, addresses the TLC’s concern for what they called passenger safety, transparency, accessibility, and accountability for all dispatchers.

Mr. Wanttaja acknowledged that app use in New York is widespread. New Yorkers, according to Mr. Wanttaja, use 76 different apps. “What the TLC doesn’t know if what level these 76 app companies comply with our rules and what protections they offer passengers,” Wanttaja said.

If the TLC proposal is passed, licensees will soon be required to file data security and privacy policies with the TLC, and passengers must be given a clear display of rates and fares, among other things. In addition, only the TLC will be able to suspend or revoke a driver’s license.

With the proposed rules, drivers will have a difficult time canceling trips, perhaps one of the greatest reasons behind why those outside were protesting. The TLC stated a concern that drivers cancel trips for illegitimate reasons, two of them highlighted at the hearing—a passenger’s race and destination. Under the proposal, the TLC will investigate consumer refusal complaints and will consider whether or not driver cancellations were, in fact, unjustified refusals.

The TLC also stressed that applications will have to provide a means of requesting an accessible vehicle for wheelchair passengers.

But that’s not all. Airport pickup will also change, but it’s still unclear how. That’ll be up to the TLC. They will designate rules for where drivers may or may not wait for dispatches at airports. Port Authority has reported that for-hire vehicles disrupt airport circulation while waiting for passengers.

Michael Allegretti, Uber’s New York Senior Manager for Public Policy, testified at the hearing, and he had a lot to say about TLC’s plan. Uber, he said, supports the TLC’s policy objectives-–preventing discriminatory behavior, maintaining a robust community car service in medallion industry by ensuring that everyone follows the rules, and more—but their approaches are questioned, and they could lead to what he believes are unintended consequences. The plan, Mr. Allegretti said, could crush thousands and thousands of drivers.

“Will you, the TLC, set the global standard for embracing the future, or undermine that progress by unfairly targeting transportation innovation?” he asked.

But the City Council’s transportation chairman, Ydanis Rodriguez, a solid friend to the traditional medallion industry, showed the room his support for the changes. Mr. Rodriguez thinks that without them, the playing-field for all drivers will remain uneven. The TLC, in Mr. Rodriguez’s eyes, is taking a step towards and more “transparent” and “fair” for-hire industry. He stated that it was the government’s responsibility to ensure that “longtime stakeholders in the respective industries are respected and maintained.”

The drivers protesting the changes believed the TLC could negatively impact transportation service applications, mostly because they believe that canceling a trip, if necessary, will be nearly impossible and inconvenient.

Driver Randolph Fable, who’s been with Uber for 11 months, worries about what could come of the future vote.

“I think it will hurt us. Customers will have to think twice before they order a job. Sometimes, you want a car and you’re in a hurry, and you order a job,” Mr. Fable said. “Now, I’m coming to pick you up. But, when I get there, you have to cancel because of an emergency. So, why shouldn’t we be able to cancel a customer job if they don’t want us?”

But taxi drivers hold firmly to their belief that apps like Uber are the ones who are wrong in the first place.

Queens resident and cab driver Vinod Malhotra has been driving his yellow cab for nearly 25 years, and he says he spent one million dollars on his medallion. Taxi drivers around him nodded their heads. They, too, spent no less than one million on their medallions decades ago.

“We are losing money. We don’t mind them [Uber], but we bought the medallion. Million dollars each, and we’re paying taxes to the city,” Mr. Malhotra said. “This is no good for us, we’re almost taken out of this business. We’re losing drivers and fares.” 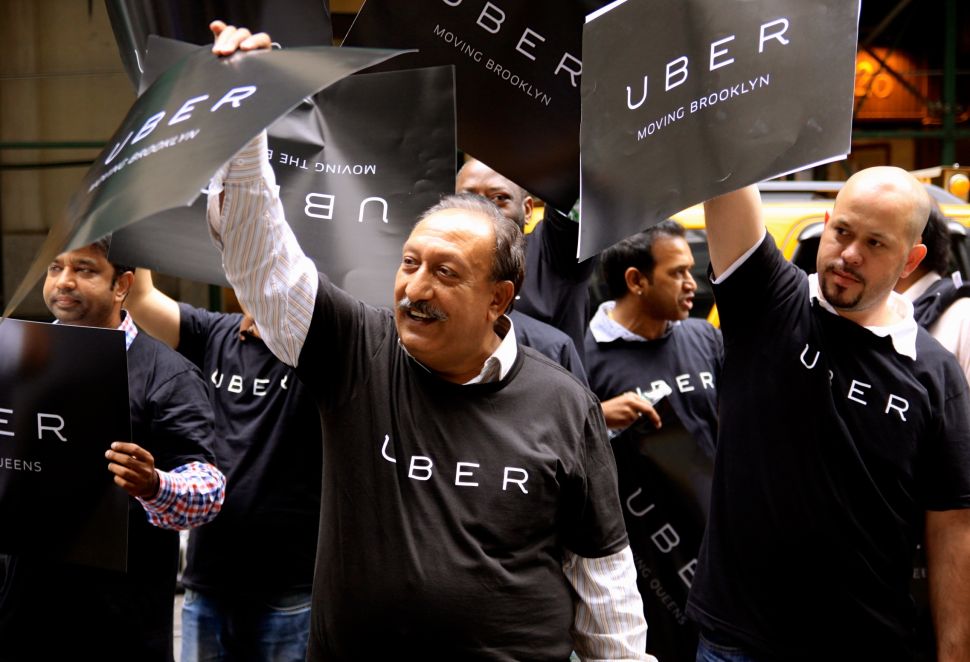