You know how M. Night Shyamalan is known for adding a twist to the end of all his movies, whether they fit, belong, or make any logical sense whatsoever? Well, what happens when you give M. Night Shyamalan a TV show? The answer is: he adds a twist to the end of every single scene whether or not it fits, belongs, or makes any logical sense whatsoever. The result is Wayward Pines, based on novels by Blake Crouch. The result is pure and utter confusion and madness. The result is me not being able to properly recap this show, because there’s nothing I can rightly explain. There’s nothing I want to be able to explain. I only ask you hold my hand tightly and come along on this ride with me, even if nothing makes any sense.

But first, something familiar: Wayward Pines begins the exact same way as Lost. An eye opens, and then pan out to see Matt Dillon lying on his back in some mysterious woods. This is Ethan. Ethan stumbles around, Jack Shephard-like, until he comes upon a town. A Twin Peaks-y town (this will be the last time I compare Wayward Pines to Twin Peaks. Twin Peaks is a road I’ve gone down and don’t want to return to.) A woman asks Ethan if she should call an ambulance. Ethan responds by falling on his face. That is a yes, desk clerk.

Boom we get our first BUT NOT OUR LAST time jump. Ethan is in therapy because of something called “the Easter bombings.” What are the Easter bombings? Not sure, details are a little tight in the early goings of Wayward Pines. What we do learn is that Ethan has a new partner, she’s a woman, and she’s being “very supportive.” That probably ends well.

Just kidding. Another time jump, this time forward. Ethan and FBI Agent Who is Not Ethan are driving in a car, apparently searching for two missing FBI Agents. One of them is Kate, Ethan’s aforementioned female partner. Apparently Ethan and Kate were having an affair. Also, apparently Ethan is married. None of this matters because out of nowhere FBI Agent Who Is Not Ethan drives straight into a truck. And I do mean straight into a truck. Someone should have seen this truck coming.

Ethan wakes up in the hospital, being attended to by a nurse played by Oscar winner Melissa Leo. This nurse is being super nice to Ethan, and in my experience nurses are only a little nice so we immediately do not trust this nurse. She tells Ethan he’s in Wayward Pines (!) and very sweetly glosses over the fact that the other FBI Agent, apparently named Agent Stalling, died horribly in the truck accident.

Over at FBI Headquarters, some FBI guys are talking about finding Agent Stalling’s body burned until it was unrecognizable, and finding no sign that Ethan was even in the car. NOTHING IS WHAT IT SEEMS.

Back in Wayward Pines, Ethan checks himself out of the hospital, but not before that nurse attempts to stop him by sticking her foot in the elevator door. That’s more childishly annoying than outright evil but still. Ethan stumbles (sidnote: Ethan does not walk. He only stumbles) into a bar where a woman named Beverly is tending bar. Ethan asks for a burger “bloody, no onions.” Beverly comes back with a burger literally 20 seconds later. “You asked for it bloody,” she says, because she thinks bloody means straight from a freezer uncooked.

Ethan doesn’t have any money to pay, but Beverly gives him an IOU. She hands him a bill with the address 604 First Avenue written on the front. That’s Beverly’s address, allegedly. She walks away, and Ethan notices the words “there are no crickets in Wayward Pines” written on the back of the bill. Then he leaves. He doesn’t stay two more minutes to ask “hey what’s this weird shit about crickets mean?” He just leaves.

Ethan goes to his hotel, and is woken up in the morning by Neil Patrick Harris. 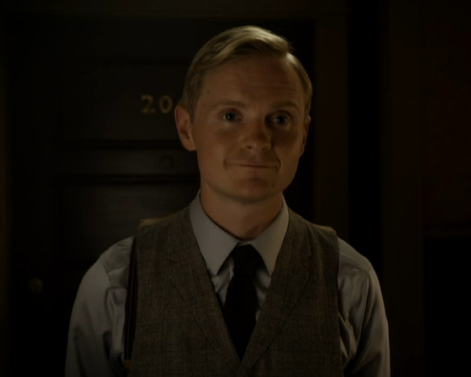 Neil Patrick Harris tells Ethan he has to vacate the hotel immediately, which is not the best timing, ever. Ethan heads to 604 First Avenue but you will not believe this 604 Avenue is a burnt out abandoned home. No way Beverly lives in a burnt out home. You know who does? The horribly decayed body of one of the FBI Agents Ethan was searching for. Not the affair one. The unimportant one.

Horrified (well, Matt Dillon’s version of horrified which is more like “buhwhuh?”) Ethan goes to the Sheriff’s office to find his wallet and phone, oh and maybe to report that dead body. And who would that sheriff be but Lucious fucking Lyon, on break from running a rap empire to sit as sheriff in a small Idaho town where nothing is what it seems.

Lucious Lyon fucking loves rum raisin ice cream. That, I think, is exactly what it seems.

Ethan tells the sheriff he found a badly decomposing body with all the gusto of describing the weather, and Lucious Lyon seems none too worried about it. Ethan admits he’s also looking for Kate, whom Ethan describes as “beautiful by anyone’s standards,” which honestly I find a little presumptuous.

Ethan’s next stop is Beverly’s bar, but plot twist #46, Beverly isn’t working there. According to the guy at the bar, Beverly never worked there. “But she served me dangerously under-cooked meat last night,” Ethan exclaims in so many words. When Ethan gets beligerent, the man at the bar knocks him out and says into a walkie-talkie:  “10-16-28 is not doing well.” I’m beginning to think that everything in Wayward Pines, despite what you see on the surface, is not what it seems.

We get a flashback to a time when Ethan led his son blindfolded on his birthday to his mom holding a birthday cake. That…is bullshit. If you’re going to blindfold a teenage son on his birthday you better lead him to something better than his mom with a cake.

Anyway, back in present day Ethan has been returned to the hospital. That nurse is there, and so is a creepy little doctor played by that guy who always plays a creepy little doctor. The doctor insists Ethan needs brain surgery but Ethan disagrees. Long story short, the nurse jams a sedative into his leg but Beverly ex machina shows back up to rescue Ethan from the hospital.

I should probably mention that Beverly says she came to Wayward Pines in 1999, and has been there a year. But its 2015, Beverly! Or is it! Beverly mentions ‘they’ killed FBI Agent Burned Man because he “tried to escape,” and that “they” are trying to “break your mind.” Ethan, the king of not asking appropriate questions, fails to ask a follow-up question to what any of that means.

Instead, he lumbers around Wayward Pines like Frankenstein’s monster, eventually coming on a picnic in the park hosted by Kate, his affair partner. And Kate looks pretty happy, and not at all like a decomposing body. Kate must have not tried to escape, which we would understand better if Ethan just asked some fucking questions.

Anyway, Ethan and his scar-face waltzes up to Kate’s door and tells her he’s been looking for her. Kate, new hairstyle and all, insists she’s never met Ethan before. Well that certainly isn’t what it seems. Kate sits Ethan down on her porch and while they’re out of ear shot of…someone…she tells him “they’re watching us. Shh. They’re listening.”

Ethan’s response, naturally, is to smash a car’s window and steal it. He drives out of town, through the woods, onto the highway and out of that place forever. That’s what I would say if I was talking about something other than Wayward Pines. Because this is in fact Wayward Pines, Ethan drives as far as he can before coming to a massive fucking electrified fence, stretching upwards and outwards as far as the eye can see.

Real quickly, we cut away to see that the creepy little Wayward Pines doctor was working with the FBI the whole time. “I want to call it off,” the FBI director says.

“You can’t call it off,” the doctor replies. “We got a ten-episode order.”

Back in Wayward Pines, Lucious Lyon eventually catches up with Ethan, because you can’t outrun swag.

“You don’t,” replies Lucious Lyon, CEO of Empire Entertainment and sheriff of Wayward Pines, Idaho. As Ethan is quickly finding out, nothing in Wayward Pines is what it seems. 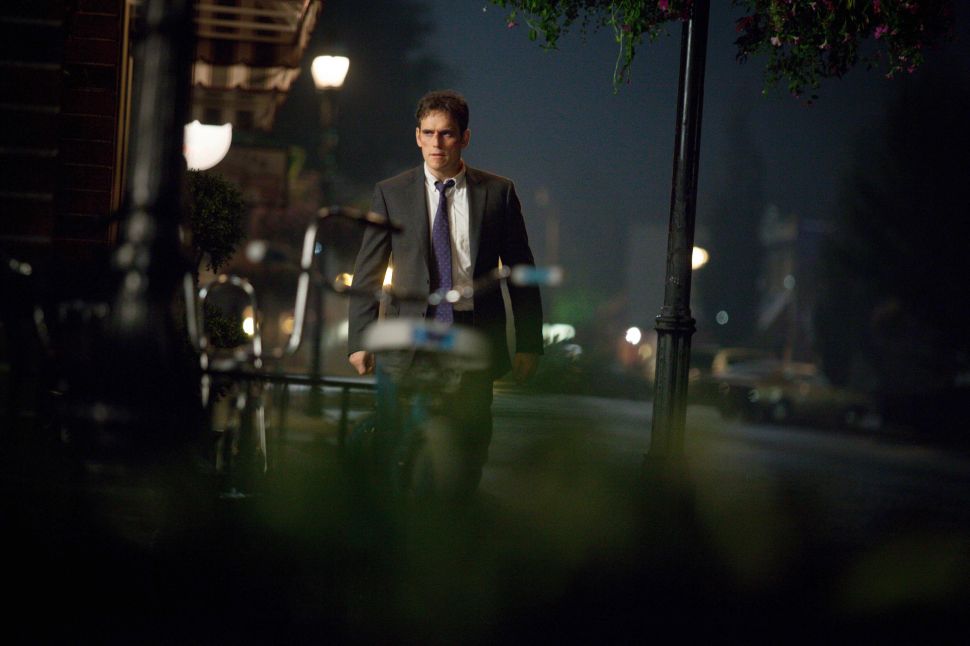