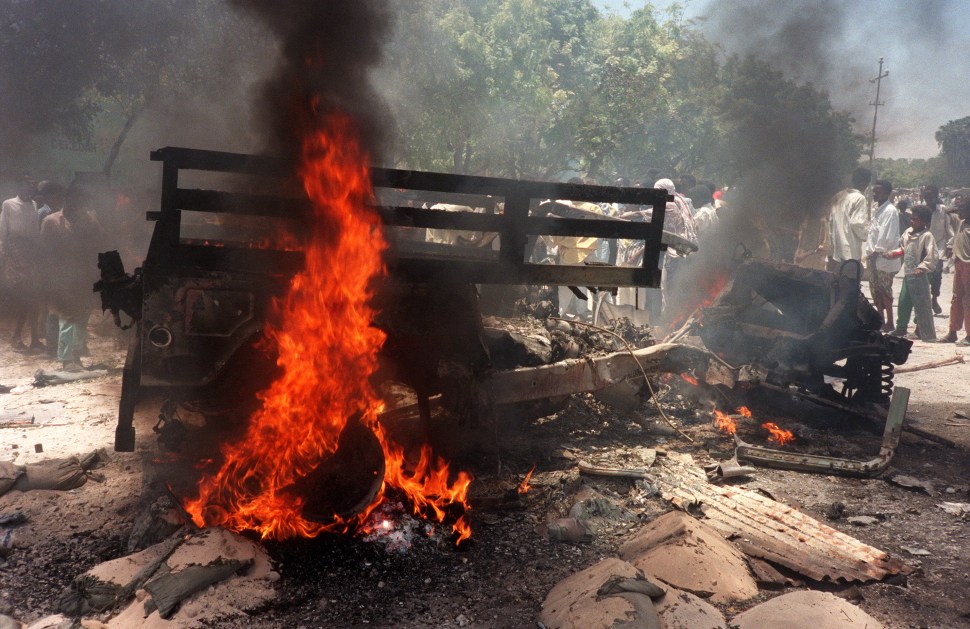 The wreckage of a jeep burns in a Mogadishu street, October 1993. Two US helicopters were also shot down. Twelve soldiers were killed, 76 wounded and six others reported missing, during a battle with followers of warlord Mohamed Farah Aidid. (STR/AFP/GettyImages)

Just for a moment, John Kerry’s visit to Somalia on Tuesday – the first ever by a US Secretary of State – brought me back to 1993, when Somalia was it. Kurt Cobain and Vincent Foster were also it, which goes to show how long ago it was, and Mogadishu was certainly never as cool as Nirvana. But it was important once, really important, a place where eighteen Americans died in one battle trying to take down Somali clan chief Mohammed Farrah Aidid, who was the biggest of America’s problems. A long time ago.

Black Hawk Down, which chronicled the climactic battle against Aidid’s forces in Mogadishu, marked the real end of American participation in the Somalia disaster. It started with a humanitarian catastrophe, grew into a weak humanitarian response, became a strong-yet-still-ineffective humanitarian response, added a hunter-killer capacity, and eventually ended in that famous shoot-out in the streets of Mogadishu.

We didn’t know it then, but Somalia was kind of an American prototype, a test run for the interventions of later decades. In retrospect it doesn’t look so different from Yemen, or Libya, or any of the three Iraqs, except maybe Empire; the only difference is that we didn’t know what we were doing. We had no counterinsurgency manuals; no knowledge of Sunni and Shia; no airbases in Kyrgyzstan. None of these has really helped us much, but we didn’t have them even so.

For the generation that fought in and around the 9/11 wars, there’s nothing particularly interesting or unique about Somalia except that it was first. It was Afghanistan in 1993. It has been eclipsed by Iraq and the real Afghanistan, not to mention Libya and Pakistan, which were all bigger and meaner. In those the US was also more ambitious, more gung-ho about the sort of aid distribution/teach-a-man-to-fish tasks that David Petraeus told us were necessary for success.

But in some ways, these later Somalias were also easier. For one thing, the enemy was more identifiably evil than the Somali clans, who in any case suffered from poor branding. It’s tough to fight a clan: for one thing, they’re hopelessly confused MacGregors and Campbells and William Wallace on the island of Mull. Al-Qaeda, on the other hand, was something everyone could oppose.

To be fair, it would also have been unbelievable in 1993 that every American would become familiar with the name of some obscure Arab fundamentalist, but remembering bin Laden was easier than remembering Mohammed Aidid because he kept reminding us. Aidid, just to clarify the difference, had a son who enlisted in the US Marines. It is difficult to imagine a young bin Laden – let alone a young Saddam or Assad – doing likewise.

Somalia was also the last time the US had an easy escape hatch. The Gulf War had been a smashing, high-tech pachinko success: American warplanes and missiles shattered the assembled Iraqi formations so thoroughly that the ground forces, immortalized in Jarhead, were almost superfluous. It was combat of the future, American computers annihilating the forces of international evil, like Mechwarriors fighting Spectre. Every war should be so easy, and none ever was again.

We didn’t know that at the time, of course, and so the debacle in Somalia seemed like a one-off. Clinton was at fault for giving the troops an open-ended mission, or not giving them armor; or the military command was at fault for expanding a humanitarian mission into combat; or the UN was at fault for wading outgunned into a clan-based cage match. In any case the combat mission ended four days after Black Hawk Down and did not resume. The Clinton Administration turned its attention, somewhat belatedly, to Yugoslavia, which had the advantage of being closer to Europe and thus more media-friendly, and even more belatedly to Rwanda, which was neither. But in any case we could leave Somalia behind and swear never again.

Somalia was also the last time “never again” was even remotely convincing. Even during the 2011 Iraq pullout, there was a general consensus that some sort of stay-behind force would be preferable to closing up shop entirely. In the wake of the ISIS revival and the return of US forces to Iraq for Gulf War III, it is probably safe to say that some element of American power will be staying. The Obama Administration has insisted it is pivoting to Asia, where the real problems are, but the desert wars keep pulling us back in.

In that first Somalia—when the world was young—we had no idea how hard future Somalias would be, and how many of them we would have to fight. In the long seismograph of American conflicts, the Battle of Mogadishu is probably a footnote, best remembered as a prerequisite course for later honors classes in Afghanistan and Iraq. It would be comforting to think that our grades are getting better, and that a Secretary of State twenty years from now won’t be similarly visiting Afghanistan, and commiserating at the destruction. Comforting, but probably unwise. 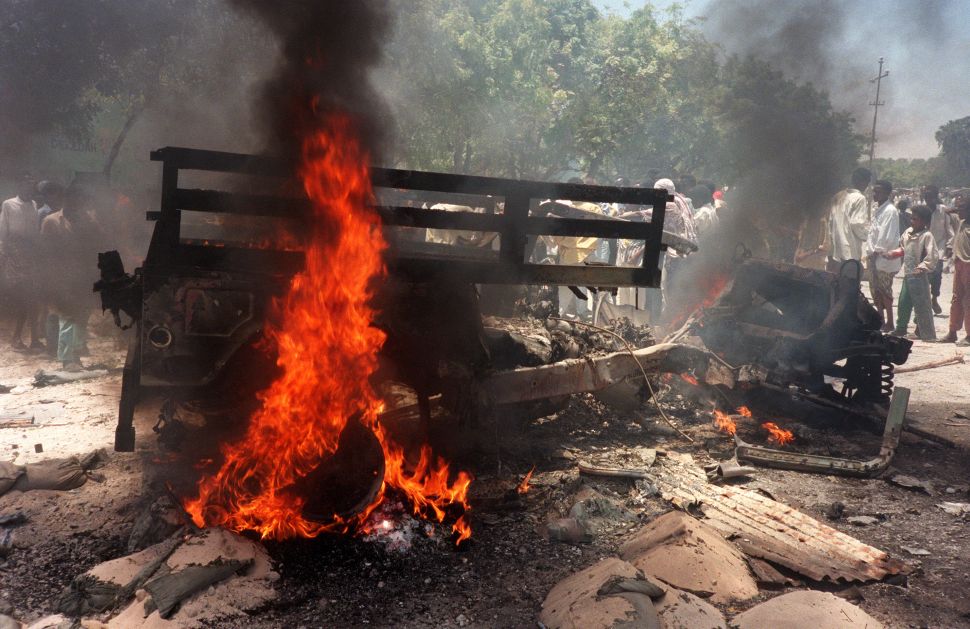