When Amanda Fortier and her future husband first decided look for a place together, it wasn’t his childhood bedroom they had in mind.

“We figured that we would rent, like most New Yorkers, so we started saving up for the deposits we would need,” explained the now 32-year-old Ms. Fortier, who had been living with roommates not far from where her then boyfriend was staying with family. “I was talking to my mom about it and she planted the idea that we should buy something.”

Instead of shacking up in a studio, the couple moved in with his parents in Queens, sharing the bedroom where he’d grown up while they scrimped for a down payment, scouring the tri-state for an apartment they could afford.

This year, that foresight paid off: Ms. Fortier and her husband just sold their one-bedroom, one-bathroom Bedford-Stuyvesant condo for almost double what they paid in 2008, money they plan to take with them in a move to southern New Jersey.

“It was a big, scary decision that we made, but we’ve loved living here,” Ms. Fortier said. “In the six years we’ve lived here, we got married and had a daughter and sadly have outgrown the space. My job is also relocating, so it was a perfect time for us to sell.”

Ms. Fortier and her family aren’t the only sellers seeing big profits in Brooklyn’s white-hot real estate market: First-quarter residential sales prices hit a record 12-year high in 2015, according to a recent report by Douglas Elliman, while the list of desirable neighborhoods and the prices property can command in Brooklyn continues to grow.

“The desire to stay urban has been really strong over the last four or five years, but the cost to stay urban has gotten significantly more expensive, especially in the last two to three years,” said Elliman broker Doug Bowen. And some Brooklynites who sell are finding it’s not easy to trade up locally.

The seller’s market is so robust, it can be hard to remember how bleak it looked to recent buyers like Melissa Keinan just a few years back.

Ms. Keinan never saw herself as a Park Slope mommy. In fact, like Ms. Fortier, the 32-year-old mother of two wasn’t even engaged to then boyfriend Amir Keinan when they closed on their Eighth Avenue co-op. The apartment, bought with help from his parents in the heart of Brownstone Brooklyn, was supposed to be a safe, short-term investment.

That was July 2008. Within weeks, Mr. Keinan was out of a job and the pair was left wondering whether they’d just made the worst financial decision of their lives. But they hung on to their home, and what could have been a cautionary tale in Miami or Las Vegas turned out to have a silver lining in Brooklyn: In December 2013, just before their second child was born, the Keinans sold their fourth-floor walk-up to a cash buyer for nearly $200,000 in straight profit.

“If we had waited a month, we never would have qualified for a mortgage,” Ms. Keinan said of the couple’s fluke fortune. “When we bought we knew our timeline, but we didn’t realize how lucky we’d be.”

Even ostensibly over-hyped neighborhoods like Greenpoint are still turning a profit for recent buyers like Diane, who says she was perfectly happy in her three-bedroom garden apartment just steps from McCarren Park until she got a note from her real estate broker.

“I hadn’t even been thinking about moving at the time,” confessed the nonprofit boss, who didn’t want us to use her last name. But when broker Yuval Vidal told her how much money she stood to make on her investment, “I thought ‘you’re an idiot if you don’t at least look.’”

“It just seemed too good an opportunity to walk away from,” she said. “It was dumb luck.”

But that same cash can’t buy as much as it once could in Brooklyn.

“The idea of a seamless move in New York real estate is quite difficult,” Mr. Bowen said. “You’re seeing a great deal of people locking in their gains and relocating out of Brooklyn.”

These days, sellers like Ms. Fortier who split for the suburbs make out well, but those like the Keinans looking to trade up in situ are still struggling to find property they can afford amid moneyed buyers and record low inventory.

Eighteen months after their sale, the family was still renting while searching for a fixer-upper, Ms. Keinan said. “We know so many people who are also looking for a foreclosed home or something that needs a lot of work—everybody we know is looking for the exact same thing, so it’s tough.”

Still, record high prices and the kind of buyers who can afford them are also moving people who previously would not have moved.

Photographer David Armstrong once swore the only way he’d only leave his beloved Jefferson Avenue sandstone was feet first. After laying down $300,000 for what he called “a wreck” in May 2000, Mr. Armstrong had his 1891 Victorian painstakingly restored, transforming the historic six-bedroom home into an artistic oasis in Bedford-Stuyvesant.

“For a long time the houses next to me were empty—nobody even used their gardens at that point,” Mr. Armstrong said. “I knew I really liked it, and the price was very inexpensive. The mortgage was less than getting a crummy one-bedroom in the city.”

He adored 615 Jefferson Avenue so much he even named a book of photos after it. But as Bed-Stuy inched from up-and-coming into coveted, the neighborhood he’d called home for nearly 15 years had begun to feel foreign.

“I can’t say enough how much I enjoyed being there and how many times I said, ‘I will never leave this house,’” the artist recalled. “But things change, and they change so much faster than they used to.”

Fed up, he turned to Bed-Stuy specialist Morgan Munsey of Evans & Nye. The house closed at $1.5 million just before last Christmas and Mr. Armstrong took his windfall upstate.

“It’s changed so radically, there’s really not the texture there was when I first moved there … it just seems like real estate,” Mr. Armstrong said. “I absolutely loved Bed-Stuy, but funnily enough, I don’t miss it at all.” 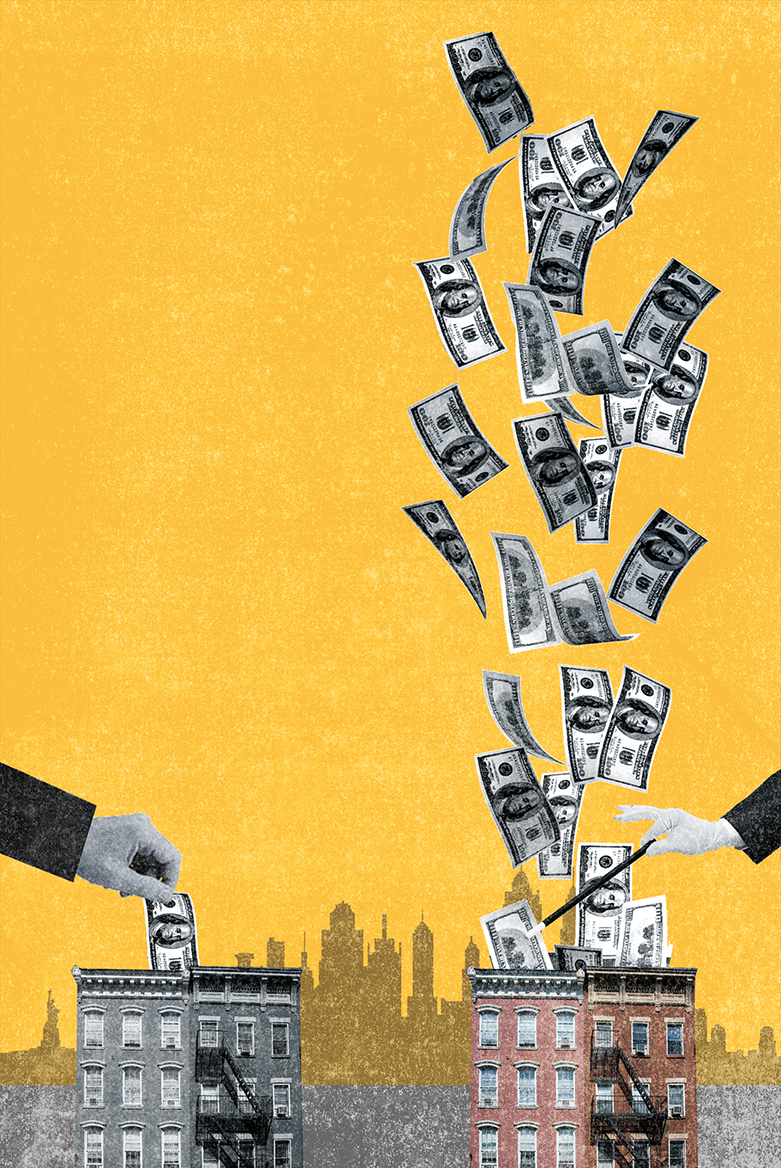