New York City has long enjoyed a reputation as one of the world’s great cultural hubs. That remains true today for the visual arts, dance, commercial theater and a number of other forms. Sadly, though, when it comes to opera New York is a bit of a backwater. The smartest city in the world seems to think that opera is an old-fashioned, expensive toy—or worse, high camp, something so ridiculous you can’t help adding it to your list of guilty pleasures.

New York is great. Opera is great. They deserve each other. So what can we do to get them together? Who can show us how it’s done? We need to ask the Germans, as a recent opera-intensive visit to their country confirmed. Here’s some lessons from the Rhine:

1. Rethink genre. In most of Europe, both critics and audiences regard opera as a subset of theater—a highly specialized form with its own rules and standards, true, but always a drama told through music, not an “absolute” piece like a symphony.

Happily, even that bastion of operatic conservatism the Met is taking definite steps toward making its work more theatrical. Recent seasons there have included deeply thoughtful stagings by Canadian filmmaker François Girard and the brilliant Russian director Dmitri Tcherniakov. The future looks even more exciting, promising debuts by two of Europe’s most in-demand A-listers, Calixto Bieito and Stefan Herheim.

2. Remember that a little controversy is not going to kill you. Mr. Bieito early in his career built a reputation as a provocateur with such productions as an updated take on Mozart’s Die Entführung aus dem Serail littered with graphic scenes of rape and mutilation. Recently, though, he seems to have mellowed, as demonstrated by his sweetly moody staging of Rameau’s 1745 burlesque opera Platée for Oper Stuttgart (May 5).

The opera is written as a farce: In order to convince the goddess Juno that her jealousy of her husband Jupiter is baseless, a plan is hatched to make her think the god is having an affair with the swamp nymph Platée—who is not only spectacularly homely but so ridiculously vain that she believes the rumor must be true.

In order to emphasize the character’s immense unattractiveness, the role was written for a male voice, a high tenor called a haute-contre. Mr. Bieito’s production amplified this gender ambiguity by making Platée biologically male, a desperately unfishy drag queen so clueless he thinks he passes for real. His divine and mortal antagonists are no more sympathetic, presented as stoned denizens of a Studio 54-ish club.

The production was light and (mostly) family friendly, but there were tough images, too. During Platée’s first aria, the singer of the role, Thomas Walker, nonchalantly and in full view of the audience tucked his penis away before wriggling into a panty girdle adorned with a human hair merkin.

3. Consider that an opera may be about more than what it’s about. Two nights before, Stuttgart revived Mr. Herheim’s extravagantly busy production of Richard Strauss’ Der Rosenkavalier that reimagined this grandiose romantic comedy as a Freudian fantasy. The Marschallin, a middle-aged 18th century Viennese princess having an adulterous affair with the teenaged nobleman Octavian, was played as a 21st century trophy wife whose dreams revealed her discontent.

Even before the music began, the Marschallin was seen onstage seated before a vanity. Suddenly she smashed the mirror and the wallpaper of her bedroom—a depiction of the rape of Europa—came to life, sending a pack of lustful satyrs with enormous erections galloping across the stage to assault her.

The level of intricate detail that followed for the next three acts would take 10 reviews to describe, but eventually the Marschallin seemed to work her way through her midlife crisis. For her final appearance in the opera, observing Octavian with his age-appropriate new love, the Marschallin (Simone Schneider) sang from a box seat in the auditorium. No longer an active participant in life, she had resigned herself to being an interested observer.

4. Have fun. Just make sure it’s smart fun. Mr. Herheim adopted a lighter mood for Handel’s comedy-drama Xerxes, heard at the Deutsche Oper am Rhein in Düsseldorf on May 6. In fact, he described his production as a “barowque Muppet Show,” with the frantic action constantly shifting from the stylized settings of an antique opera stage to the theater’s squalid backstage area. The title character, a warrior feared across the ancient world, was here an impossibly temperamental 18th- century opera singer.

This production featured the outstanding solo performance of all the operas I saw, countertenor Valer Sabadus, who enacted the Jekyll-Hyde parodox of the artist-as-monster with ravishing silvery tone and enough manic slapstick to empower a road company of Something Rotten!

5. Don’t be the only game in town. Another problem with opera in New York is the absence of a second major company to complement the Met artistically. With the demise (and less than promising plans for resurrection) of the New York City Opera, we lack the equivalent of Berlin’s Komische Oper, where artistic director Barrie Kosky has directed at least two productions, Schoenberg’s Moses und Aron and the American musical West Side Story that might have meshed perfectly with NYCO’s artistic mission.

Mr. Kosky took West Side Story seriously, too. Against a setting consisting of only ominous black brick walls and glaring lights, the cast, a mix of opera singers and musical theater dancers, sported hoodies and track pants that might have come off the rack of any discount store on 125th Street. (The Sharks were always popping off their shirts, revealing torso-spanning tattoos.) This production was a model of how to present a musical in an opera house: large-scaled, but still human.

6. Don’t promise a masterpiece every time. A ferociously acted but visually clichéd Luisa Miller in Stuttgart and a dead-on-arrival Così fan tutte at the Komische demonstrated that nobody gets it right all the time.

7. Never, never forget that opera is for everybody. Accustomed to hearing opera at the Met, where the average attendee is more likely than not on Medicare, I was bewildered at the number of kids—high schoolers barely over Platée’s recommended minimum age of 14—crowding the auditorium.

I asked Jossi Wieler, director of the Stuttgart Opera, how he accomplished this seeming miracle. It’s nothing fancy, in fact: “Rather than presenting operas in stage settings and costumes true to the period in which they were set, directors, set and costume designers attempt to relate the characters and stories to contemporary conditions—a practice which appeals especially to younger audiences,” he emailed. “We also target students with a special program: Students who have registered on our website can buy tickets for 10 Euros in advance.”

So, you see, New York, it’s not that complicated after all. 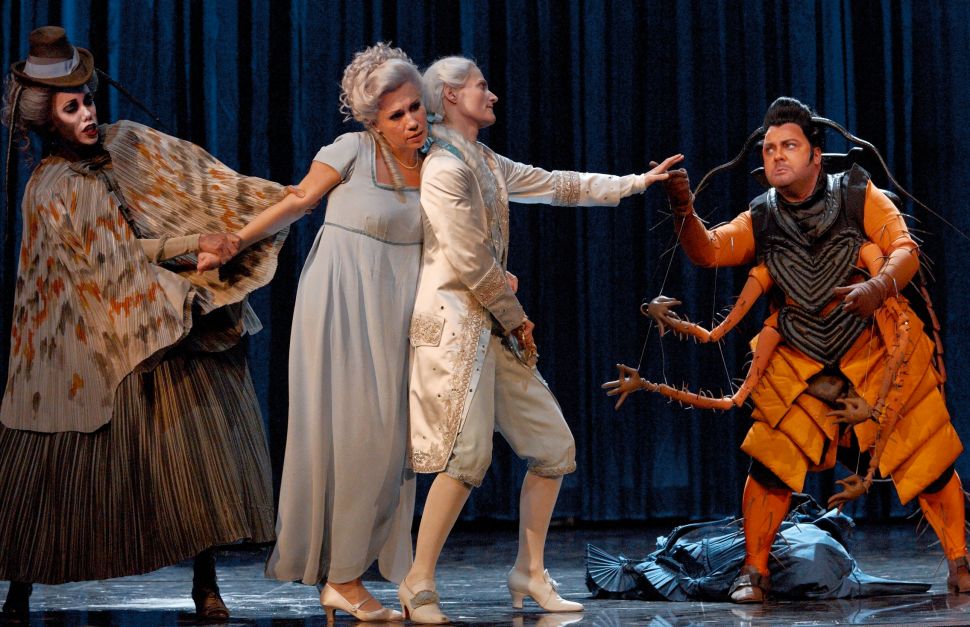