New Jersey Gov. Chris Christie had one question for the handful of Working Families Party-affiliated protesters who picketed his fundraiser at the exclusive 21 Club on West 52nd Street tonight, demanding that he support a bill that would guarantee paid sick days to all Garden State residents: “Who’s going to pay for it?”

A gaggle of demonstrators from WFP and its New Jersey affiliate, NJ Working Families—which is a political nonprofit, not a party—gathered outside the 21 Club shortly before the 6:30 p.m. money drive for Mr. Christie, a likely 2016 GOP presidential candidate. Joining them was Manhattan Councilman Corey Johnson, a member of the liberal Progressive Caucus who backed the expansion of New York City’s paid sick leave law last year.

Mr. Johnson derided Mr. Christie’s odds of ever attaining the presidency, noting that the governor polls poorly in the crowded field of Republican candidates.

“Governor Christie’s candidacy might be a joke, but paid sick days for New Jerseyans that need it is no laughing matter,” he told the Observer, noting that surveys have shown the time off initiative has support among many voters Mr. Christie’s state. “He’s traveling the country, dismal poll numbers, while paid sick days is a popular proposal. Enacting it into state law might actually make his approval ratings go up.”

The bill under consideration in the New Jersey Assembly and State Senate would cover all employees across the state, making it even broader than the one passed over former Mayor Michael Bloomberg‘s veto in 2013 and which Mayor Bill de Blasio strengthened last year to apply to any business with five or more workers. NJ Working Families demonstrators have pursued Mr. Christie to events in Philadelphia and Boston since he expressed “grave concerns” about the bill earlier this year.

“Governor Christie is standing in the way of 1.2 million New Jerseyans. Paid sick days should be a basic right,” said Robert Duffey, communications director for NJ Working Families. “1.2 million New Jerseyans have to choose between their jobs and taking care of themselves and their loved ones when the fall ill. It’s an impossible choice. Too many families have to face it.”

The governor emerged from the club around 9:30 and, after his terse response to the protesters asking him why he did not support the legislation, refused to respond to questions from the Observer about Mr. Johnson’s comments.

Mr. Christie is not the only 2016 presidential contender to visit New York City recently. Declared GOP candidates Sen. Marco Rubio of Florida, Sen. Ted Cruz of Texas, Sen. Rand Paul of Kentucky and former Florida Gov. Jeb Bush have made their pitches to donors and interest groups in Manhattan and Brooklyn this year—as has Wisconsin Gov. Scott Walker, who expected announce his run soon.

Democratic front-runner Hillary Clinton, the former secretary of state, has made multiple stops in the city since declaring her candidacy, and has a fundraiser in Queens scheduled for June 1. Her longshot rival, Sen. Bernie Sanders of Vermont, appeared at Rev. Al Sharpton’s National Action Network convention in April, weeks before announcing his own bid for the White House. 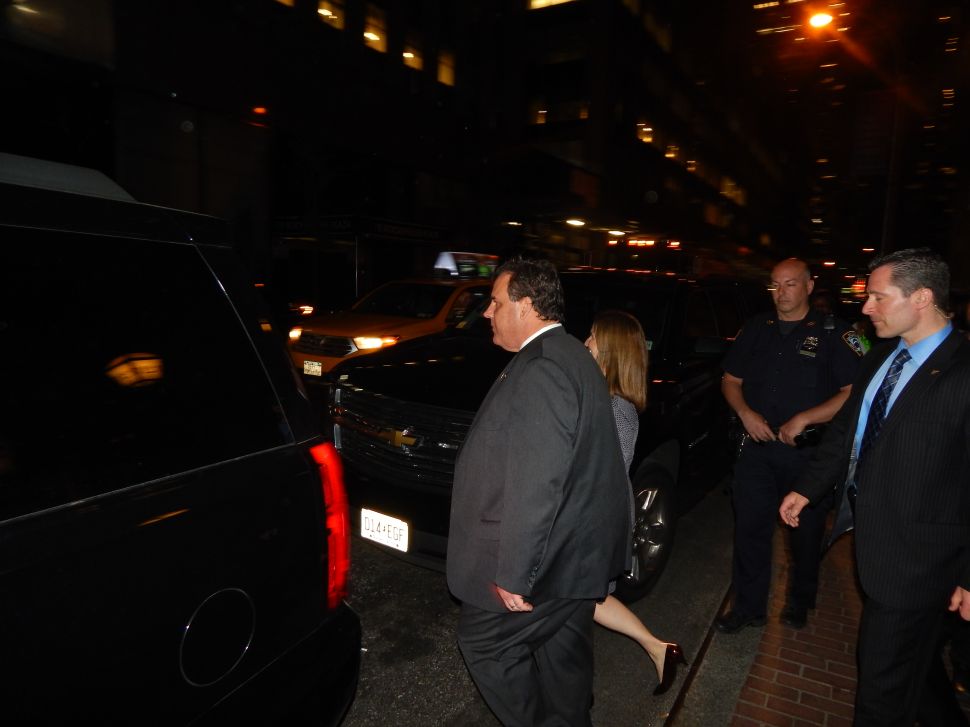