In 1981, Kathryn Sennis recalled recently, standing in the parlor of her brownstone at 46 First Place in Carroll Gardens, popular wisdom among her fellow suburbanites militated against moving anywhere south of Atlantic Avenue, which lies about a mile to the north. But from the time she opened the gate, making her way across the deep front garden, Ms. Sennis sensed that she had come to stay. She was undeterred even when she returned the next day, check in hand, to find that the seller, an elderly Italian woman named Carolina Oliveres, had raised her price by $35,000, to $250,000, goaded by a neighborhood busybody who claimed he “had a couple from Long Island” willing to pay the higher figure.

“In those days, there was always ‘a couple from Long Island,’” chuckled Ms. Sennis, who was then herself moving from Long Island, and who has lately listed her home for $6.25 million with Marion Fiore of Douglas Elliman. “These hands have touched every square inch of this house,” she continued, referring to the extensive renovations for which Ms. Oliveres’ long occupancy had left a need. “I loved renovating this house. It was a pleasure. It was an honor.”

Yellow enamel paint was stripped from the walls and large gashes repaired. Today, the entryway, which like the rest of the parlor floor floods to 13-foot ceilings with air and light, is done in an inviting shade of lilac. Ceilings are framed in ornate tiers of original metallic molding, painted white, which find complement in pillars and pilasters, and runs of thin, decorative spindles that descend whimsically from doorways like bits of repurposed birdcage. Ms. Sennis rents the two upper floors to tenants and allows her daughter to use the garden level. Her kitchen, at the back of the home, is small and bright and charming, floored in black-and-white tile. During a recent visit, its sliding door stood open, admitting the honeyed aroma of the wisteria that twists in wide braids about a rear terrace.

When she arrived, Ms. Sennis stuck out. “But, you ain’t even Italian!” a confused young man sputtered, upon hearing that she’d bought on First Place. “Is she clean?” another neighbor wondered, learning of Ms. Sennis’ Greek ancestry. The newcomer had much to learn, too. Waking in the small hours to the baby’s crying, Ms. Sennis would go to the window. On the corner, hatted men loitered in pairs, brandishing cigars.

“I asked the neighbor about them,” she remembered. “I told her, ‘You know, I see these two guys standing there.’”

The neighbor was incredulous. “‘You don’t know?’ she says. ‘They protect the neighborhood.’” 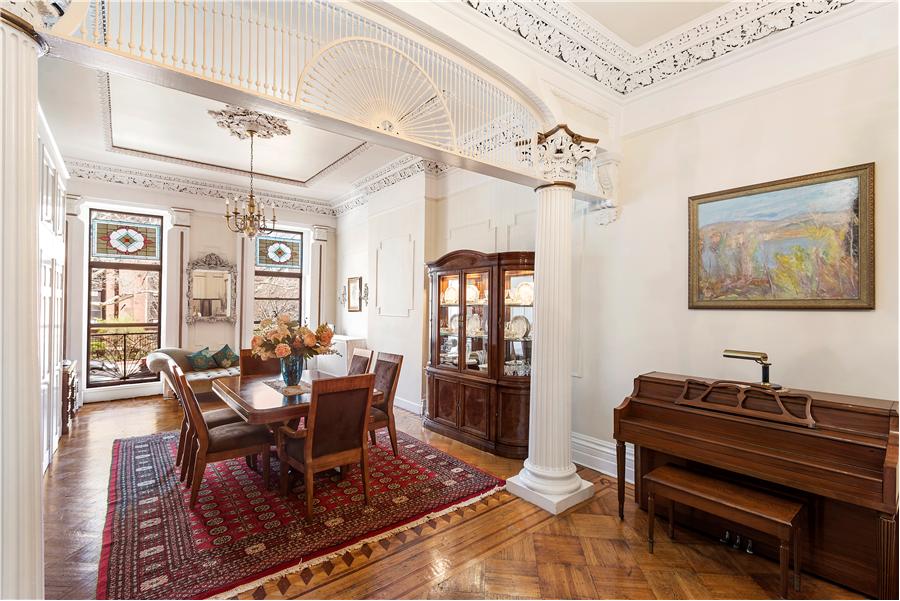