If you enter the Frieze Tent from the South Entrance, one of the first things you’ll see is Linder’s blazing light box work, Untitled (1977), a collage of an oiled nude female with an iron for a head and lipsticked mouths for nipples, set against a soft pink wall. It’s bold, it’s uncensored, and it was just one of a number of works by female artists that mixed pornography and social commentary at the Frieze New York.

London Gallery Stuart Shave/Modern Art at Booth C55 is doing a solo presentation of the 60-year-old, Liverpool-born artist. On view is mix of older pieces from the 1970s and fairly recent works that range from large-scale light boxes to small photo collages. According to a gallery representative, she was once a friend and photographer of the musician Morrissey, and weaved in and out of the music, fashion, and art worlds for years.

“I would send my male friends into the shop and say, ‘just buy a bunch for me,’” she said. “It would have been quite odd to go in myself.” 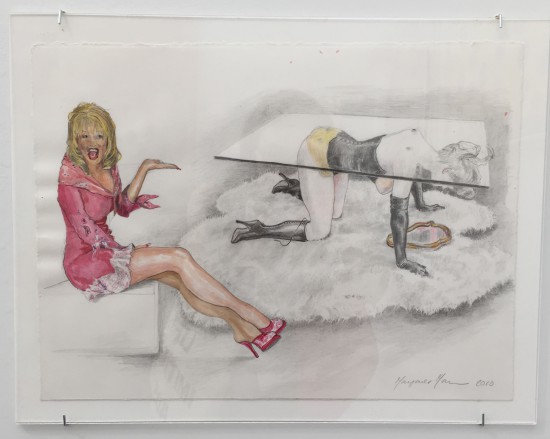