Making art is expensive. For example, if you want to break into the world of comics like I do, it would cost you over $1,200 to do an eight page mini-comic meant to be shared with potential readers. If a comic creator wants to catch the attention of a Marvel or a DC, they’re looking at upfront costs of nearly $9,000. That’s $4,000, minimum, to pay an artist to draw, color, and letter a twenty page comic. Then $2,500, also minimum, to print 1,000 copies of the book. And finally, the balance of that money would then be spent on going to a convention like the New York City Comic Con, renting a booth, doing some ads, and then giving the copies out for free. (Yes. Free) in order to capture the attention of employees of both companies since there’s no other way to get their attention. Unless you’re already famous, of course.

The math is similar for just about any project these days: recording an album, writing a book, launching an app. Few things in life are truly “free”.

I tell you this because Kickstarter comes up frequently whenever the cost of doing a creative project of any kind is discussed. Like so many trends in social media, it’s the new default thing to say to your creative friends: “Oh, why don’t you try crowdfunding it?” In fact, when I talk to people about my comic, “Liberty: The Second City Saint”, they suggest Kickstarter without fail. Every. Single. Time.

But there happens to be a problem with Kickstarter: Most campaigns fail. This is such an embarrassing reality for the New York City based company that at one point they took the extra step of hiding those failures from Google’s search results.

Kickstarter’s closest rival, Indiegogo, fares worse, with only one in ten campaigns on the site successfully find funding. In fact, it’s so easy to predict failure for a Kickstarter campaign that there’s a data model that exists that can predict failure on the platform with close to 76 percent accuracy.

Now listen, Kickstarter is based here in the city, and I want to see New York tech companies succeed. I also don’t doubt that there are great success stories  that don’t involve big celebrities, the well connected, the well funded, and the well organized. To say nothing of successful campaigns that received a crazy amount of media attention too. But unless you’re any of those things, or just lucky, you’re not going to have lot of success on Kickstarter. That’s just the reality of it.

Is it possible, in theory, to get attention for yourself and your product? Yes. But as Homer Simpson once said, in theory, communism works too.

In the case of Kickstarter specifically, fame goes a long way toward determining success too. That’s why Kickstarter campaigns for Zach Braff (who repaid backers by making a shitty movie, because everything Zach Braff has done since “Scrubs” is shitty), Veronica Mars, and Reading Rainbow were as successful as they were.

The reality is that most people, myself included, are not well known, not well organized, and don’t have access to the kind of time, capital, and other resources needed to launch a successful Kickstarter campaign. Do you really want to waste what you do have on something where the probability of success is only 43 percent?

For most people, Kickstarter is a lottery. For example, there is absolutely no way Zack Brown’s “potato salad” Kickstarter would have done as well as it did without the media attention it received. Or Anonabox. Or the major role Engadget played in spreading the word about Pebble, which tellingly remains the biggest and most successful Kickstarter campaign to this day.

From what I and others have found, it’s also not just you and your circumstances that determine your success or failure on Kickstarter. It’s the platform itself. If you don’t gain any sort of traction in the first hour (what I found), or the first day (what others have found), then it becomes incredibly difficult for your campaign to succeed at all. It’s like with a YouTube video, unless your video takes off immediately or get featured on the homepage, it’s probably not going to go viral. If you don’t make serious headway in your first 24 hours on Kickstarter, the data shows you’re basically toast.

The high failure rate on Kickstarter has unfortunately lead to a cottage industry of experts and gurus running around and telling you about how you can succeed on the platform. Much of what they say amounts to warmed over personal branding advice. Stuff that was new and compelling in the ‘30s that’s just been recycled now because nobody knows who Dale Carnegie is anymore.

All of this is to say: If you think a Kickstarter campaign is going to solve your problems, it likely won’t. There’s no shortcut to success. You know why I started off by saying comic creators had to print 1,000 copies and hand them out for free at a comic convention? Because that’s the minimum amount of people they need to get a good email list going. Give out the comic, get the email address. That’s how it starts. Success is a game of inches.

But success as a game of inches isn’t sexy, so we let these idiots run around and tell us how great Facebook, YouTube, and Kickstarter are and we believe them because that sounds so much more exciting than the truth. Why should you care what the social media and Kickstarter gurus say? Because the press usually repeats them, and that leads to a trickle down effect where your friends and family start repeating them too.

There’s this myth that there’s this huge pool of untapped money waiting for you on Kickstarter, but this is wishful thinking. I see Kickstarter as a step back, not forward. I believe, and maybe I can instill this confidence in some of you, that if an idea / product / concept is good enough, it will find a way to succeed. Maybe not in the form or medium you might think, and maybe not on the timetable you want or need it to, but it’ll have an opportunity if you stick with it. That means you don’t need Kickstarter. You just need a damn good network and an organized infrastructure to succeed.

And you know what the funny part is? That’s the exact thing you need to succeed to begin with on Kickstarter. So if you’ve got that all in place, why bother using them at all?

B.J. Mendelson is the author of Social Media Is Bullshit from St. Martin’s Press. 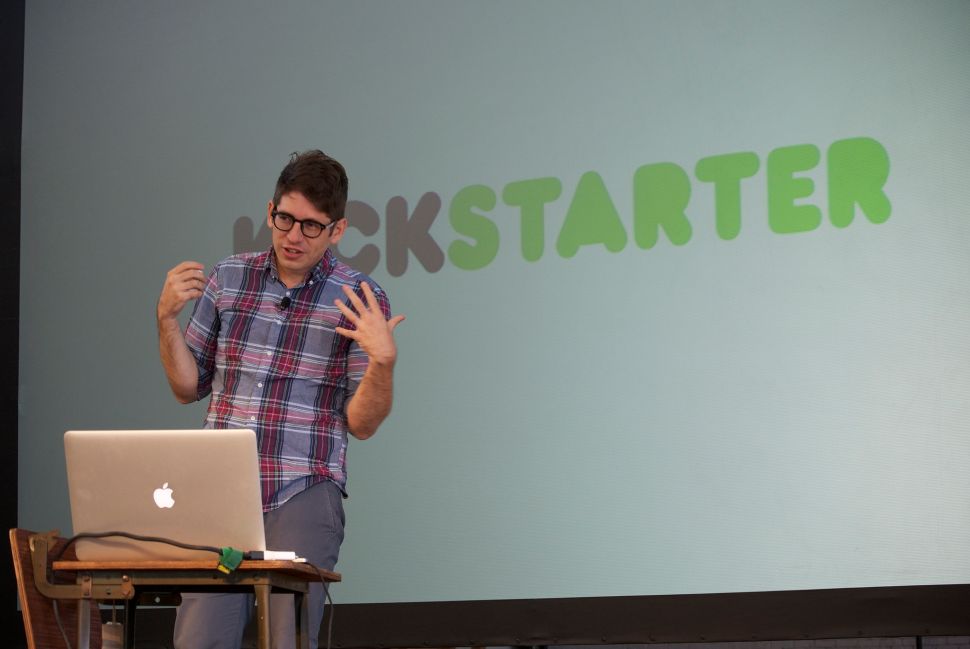