People behind Youtube videos about everything from makeup to anime are lending their talents to another medium—the political ad.

A cadre of “Youtube stars” have joined together for what digital media company Usfluence says is a first-of-its-kind video, urging residents of New York’s 11th congressional district to vote against District Attorney Daniel Donovan because of his role as prosecutor in the Eric Garner case.

Mr. Donovan, a Republican, impaneled a grand jury that opted not to indict Police Officer Daniel Pantaleo in the choking death of Garner, which was captured on video.

The video starts with the “Youtubers” urging people in Staten Island and parts of Brooklyn to pay attention to today’s special election. Then, one of the duo behind the Youtube account StudzLife101, a video channel aimed at educating people about lesbian, bisexual, gay and transgender issues, asks “Do you remember this?”

The video cuts to a clip of Garner being brought down by police while he yells that he cannot breathe.

Youtuber MrRepzion—behind videos like “Dumb Muslim Sues Over Pork” and walkthroughs of the adult video game “HuniePop”—reminds viewers, “Eric Garner was choked to death by a New York police officer.”

But the cop wasn’t charged, because, as former AirAmerica liberal talk radio host and comedian Sam Seder puts it, “this man, your district attorney, refused to do his job.”

“His name is Dan Donovan, and he’s running for Congress to replace another bad politician, who resigned after pleading guilty to fraud,” Youtuber Motoki Maxted says, before a picture of former Congressman Michael Grimm, also a Republican, pops up.

The video goes on to feature the Youtube users urging voters to “vote against Dan Donovan” in today’s race. They don’t mention Mr. Donovan’s opponent, Brooklyn Councilman Vincent Gentile, but after the video is finished, and after a photo of Mr. Donovan is displayed with a call to vote against him, a quick picture of Mr. Gentile is shown, urging voters to choose him.

It does not appear that any of the featured Youtubers live within the district.

“We’re focused on the opinions of people who live in the 11th Congressional District,” Donovan spokeswoman Jessica Proud said of the ad.

Usfluence, the company behind the video, says its goal is to use Youtube personalities to “promote causes, campaigns and candidates.” This is its first time personalities from the website, which allows people to upload their own videos, have aimed at a particular election in an ad, Usfluence said.

“YouTubers have a relationship with their fans that is authentic, highly personal, hugely influential and incredibly effective at driving action,” Ryan Yudell, the company’s managing director, said in a statement. “They believe police abuse of power and the subsequent political cover ups have gotten out of control. They believe Dan Donovan didn’t do his job as District Attorney to stand up for the citizens of the 11th District and they absolutely don’t want to see him promoted to Congress.”

The spot was paid for by the Unifying America PAC, which according to Federal Election Commission records was just registered on May 2. The PAC’s custodian of records and treasurer is listed as Sadia Malik of Staten Island, who has previously co-chaired the Staten Island Democratic Dinner. The PAC did not immediately respond to a request for comment e-mailed to the address registered with the FEC.

Others appearing in the video include Josh Paler Lin, who was at the center of a heartwarming viral video about a homeless man that others later said was staged, and Arielle Scarcella, of the “Lesbians Explain” and “Dear Straight Girls” video series.

The ad notes that low turnout is expected for the special election, saying Mr. Donovan, who is the favorite, may win by just a few hundred voters. Earlier today, Mr. Gentile projected higher-than-expected turnout. 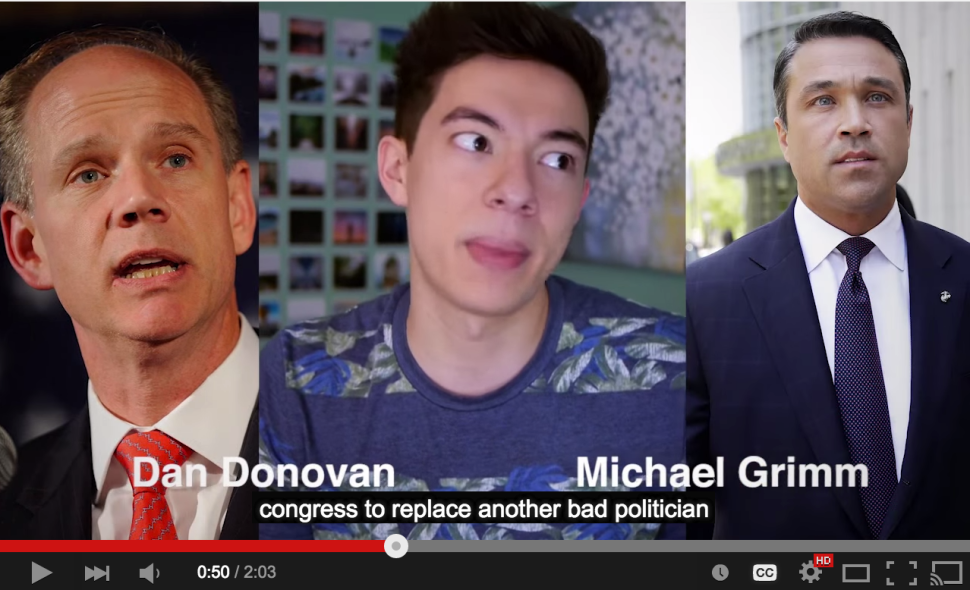