This is an important decade for Generation X. Poised to take over as the new world policy-makers, it’s time for them to assess what they’ve learned and apply it to the culture at large.

Art is of course a part of culture, and when you look at important milestones for the American branch of Gen X artists, Yale’s 1986 MFA class is considered the first (and possibly largest) contribution from this oft maligned group. John Currin, Sean Landers, and Richard Phillips helped to make this one of the deepest MFA classes Yale has ever seen.

Lisa Yuskavage wasn’t the only female alum from this class, but at times if felt as if she was the only counter-balance to what was often perceived as a rowdy boys club. That’s not to say that Yuskavage was ever antagonistic towards her classmates, in fact quite the opposite. After school, she moved to New York City with Landers and Currin, and they continued the dialogue that they had developed in school, eventually helping to bring figurative painting back into art world favor.

Arguably the most talented artist from the class of ’86, Yuskavage recently mounted her fourth exhibition at the David Zwirner Gallery, up through June 15th. Many are hailing it as a watershed exhibition for the 53-year-old, mostly because the male figure makes its début in her new series of paintings and drawings, and yet this development is merely the next injection of foils and references for the feminist message that Ms. Yuskavage was offering us all along.

Upon entering the gallery, visitors meet what could be considered a classic Yuskavage in the form of a glowing emerald diptych titled Bonfire, 2013-15. The imagery in this large-scale oil painting presents the sort of sapphic dreamworld Ms. Yuskavage has become known for: A clandestine realm strewn with comically drawn women and girls in various states of undress, signifying a sort of communal ideal of mankind (or rather, womankind) living as one with nature. It’s a vision that Ms. Yuskavage has mastered. Curvy rococo figures frolic in the distance while a set of stoic and symmetrical twin teens loom in the foreground like sphinxes at the ancient gate of a mythic city. Ms. Yuskavage’s Bonfire is the kind of exquisite blend of proto-modern European and post-modern American styles and references that we’ve come to take for granted in her work, which is perhaps why the artist has begun to change directions.

Further into the exhibition, it becomes clear that Ms. Yuskavage is up to something new. Mardi Gras Honeymoon, 2015 takes the unfamiliar form of two nude lovers who are electrically engaged through eye contact. The subject sounds cliché in its description and was probably sourced from a cheesy 70’s porn image, but from this base Ms. Yuskavage goes on to build a fantastic image; one which employs a coterie of ghosts from paintings past. The two figures in the painting, who straddle a bench, actively balance each other while twisting toward and honing in on each other at the same time.

Colors are also highly emblematic in Ms. Yuskavage’s new paintings, many of which reference the Renaissance-era technique of cangiantismo: a painting style that monochromatically tints characters in order to signify their powers or leanings. This practice, in tandem with Ms. Yuskavage’s subtle sense of caricature, is startlingly effective. The rose-tinted girl (posed in front of her male counterpart) is the embodiment of youth, with both supple and gravity-defying parts that radiate curiosity and naiveté. In stark contrast, her grisaille suitor looks both hollow and ashen, his only proof of life a blonde head and beard of unkempt wisps. He is a symbol of the “burnt out” hippie whose idealism has led only to suffering, and he wears his pained expression like a scar that proves a past fraught with worry.

These and a multitude of other lovingly rendered details add up to a veritable litany of sexual signifiers that purportedly evolved between the 60s and 90s in America, yet which surely have their roots in a host of older–even ancient–cultures. As she continues to navigate her world, Ms. Yuskavage’s luminous oeuvre should serve as a marker of how this society first dared to show the way sex and nudity might be seen from a woman’s perspective, not to mention how male-oriented pornography could be smartly redirected. It’s a distinction that is, in the end, a towering accomplishment. 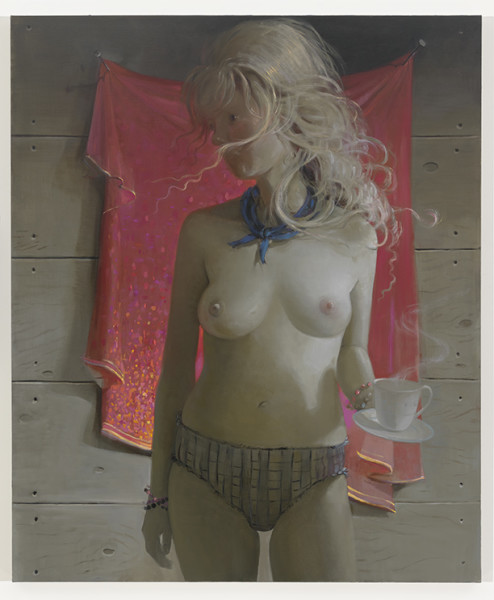