Last week, a maintenance worker removed what looked like a makeshift bench from a public area in Madison, Conn., tearing it apart with a hammer and relocating the resulting rubbish to a nearby dumpster.

But unbeknownst to the worker, the item was actually a work of art—known as the Corbu Bench—and part of the town’s annual Sculpture Mile contemporary art show.

The worker and the property management company he works for believed the bench was left by skateboarders. Alas, it is (or was?) a sculpture by New School professor Jim Osman, valued at approximately $10,000.

Inspired by the designs of French architect Le Corbusier, Mr. Osman made the wood and Astroturf bench two years ago and it was installed in Madison a week ago, after being displayed in New York City for a time.

The property management company has offered to compensate Mr. Osman for the bench, reports the Associated Press. But William Bendig, the founder and president of the Hollycroft Foundation, which sponsors the art show, demanded the worker recover the artwork and assist in its restoration. The unnamed worker, who at first resisted that request, has since relented, the AP said.

“It’s kind of a big letdown,” Mr. Osman, who has exhibited at the Lesley Heller Workspace, told the newswire. But if the piece is salvageable, he is willing to restore it, he said. 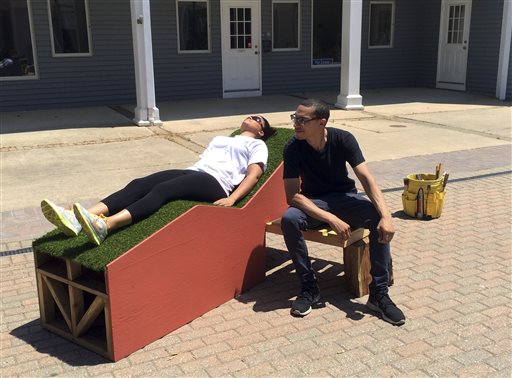