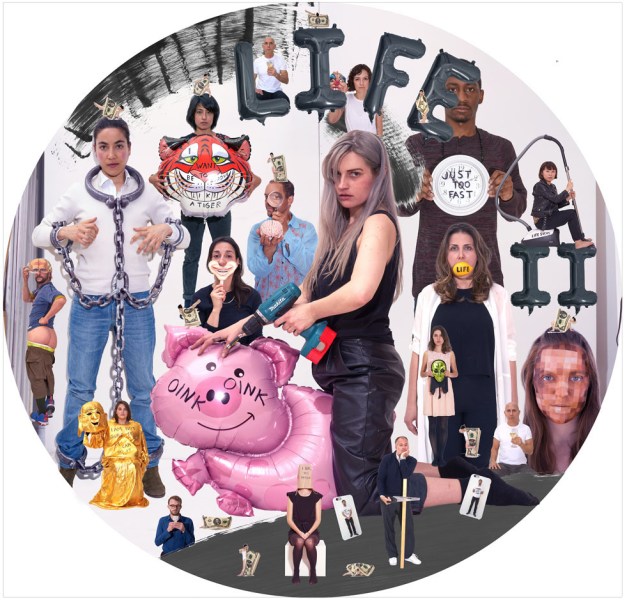 Opening: “Niele Toroni” at the Swiss Institute
A conceptual artist who has made a unique place for himself in the art world by making repeated, measured marks with paint on a variety of surfaces for the past 50 years, Niele Toroni rarely shows in New York. The Swiss Institute presents the artist’s first solo exhibition in the U.S. in 25 years with a survey that spans 40 years of monochromatic imprints from a No. 50 brush repeated at regular intervals on 30 centimeters on fabric, canvas, paper, and specific sites in the space. Don’t bother to bring a measuring tape; this guy never misses the mark!
Swiss Institute, 18 Wooster Street, 6-8 p.m. 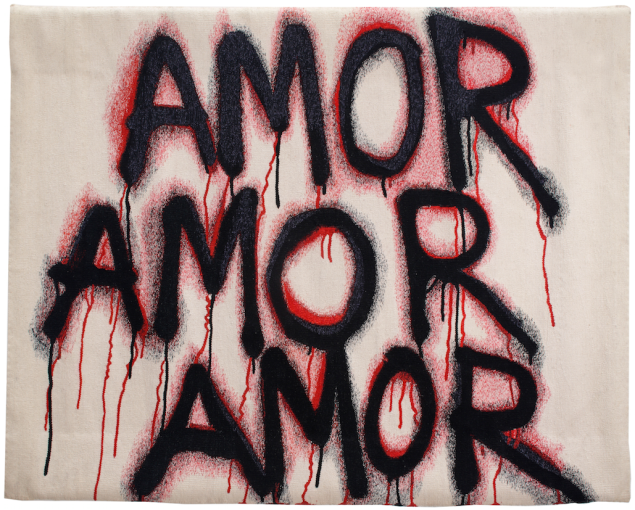 Talk: “Our History/Notre histoire” at Cabinet
If you want to understand the difference between Canada and Quebec, this show and talk are for you. Artist and professor Michael Blum presents his exhibition and book “Our History/Notre histoire,” a creative project on Canadian and Quebecois politics. Museum of Modern Art director Glenn D. Lowry joins Mr. Blum for a discussion, which is followed by an audience Q&A—just don’t drink too many free Brooklyn Brewery beers and ask Mr. Lowry about Bjork, Yoko, or Klaus!
Cabinet, 300 Nevins Street, Brooklyn, 7-9 p.m.

Opening: “Space Between” at Flag Art Foundation
Drawing on a mix of established and lesser-known artists working with abstraction, Louis Grachos, the highly-respected director of The Contemporary Austin, and FLAG Art Foundation’s Stephanie Roach present a group exhibition of paintings, sculptures, and photographs that defy categorization, instead falling into the space between. With works by Ellsworth Kelly, Liam Gillick, and Rachel Whiteread—among others—on view, expect the experience to be sublime.
Flag Art Foundation, 545 West 25 Street, 6-8 p.m.

Talk: “Painting and the Legacy of Feminism” at Maccarone
Presented on the occasion of Maccarone’s two current shows, Cecily Brown’s “The English Garden” and Rosy Keyser’s “The Hell Bitch,” and the recent exhibition “Joan Semmel: Across Five Decades” at Alexander Gray Associates, super-curator and writer Alison Gingeras moderates a discussion on painting and feminism with some of the best women artists working today. This will be a unique conversation, where much can be learned.
Maccarone , 630 Greenwich Street, 7 p.m. 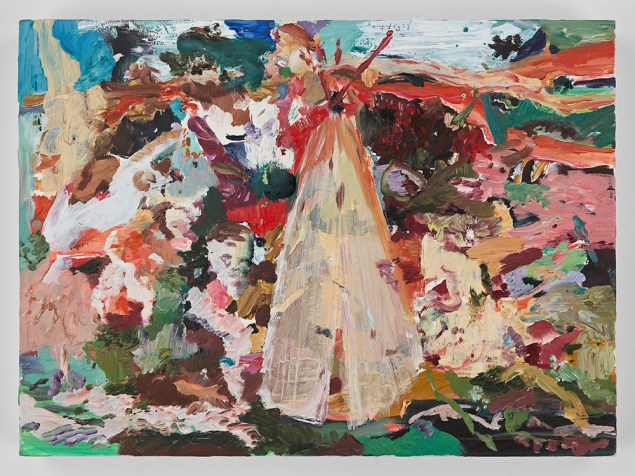 Opening: “Kim Gordon: The City Is A Garden” at 303 Gallery
Most folks identify Kim Gordon as the bass guitarist and vocalist of the alternative rock band Sonic Youth, but Gordon is also an established visual artist and curator. A 1980s graduate from L.A.’s Otis College of Art & Design, Ms. Gordon has organized shows and exhibited her art around the world. For her first solo show with 303 Gallery, the artist uses resins, glitters, and fiberglass to make playful, irreverent works that get displayed under a black and white banner of Kim in the studio—adding a bit of performance to the process of making art.
303 Gallery, 507 West 24 Street, 6-8 p.m.

Talk: “Marin Hopper & Mark Rozzo Discuss Dennis Hopper: Drugstore Camera” at Strand Bookstore
Shortly after completing the film Easy Rider in the late 1960s, Dennis Hopper settled in Taos, New Mexico, where he started taking pictures with a disposable camera that shot black and white film to be developed at drugstores. These intimate images of family and friends, strange road trip shots, and offbeat still life pictures were lost until Hopper’s daughter Marin discovered them after his death and put them together in a handsomely designed book. On Thursday, Vanity Fair deputy editor Mark Rozzo joins Ms. Hopper to discuss the captivating photos and the vision of the unforgettable actor and artist who made them.
Strand Bookstore, 828 Broadway, 7-8 p.m.

Opening: “Olaf Breuning” at Metro Pictures
A bad-boy artist with a wicked sense of humor, Olaf Breuning offers a series of large photo-collages of people engaged in comical activities that get printed as wallpaper and mounted to nine-foot circular disks on the gallery’s walls. Ten of these digitally manipulated montages surround five large steel sculptures made with mirrored surfaces to reflect the nutty imagery and turn the whole environment into a modern-day funhouse chock full of charm.
Metro Pictures, 519 West 24 Street, 6-8 p.m. 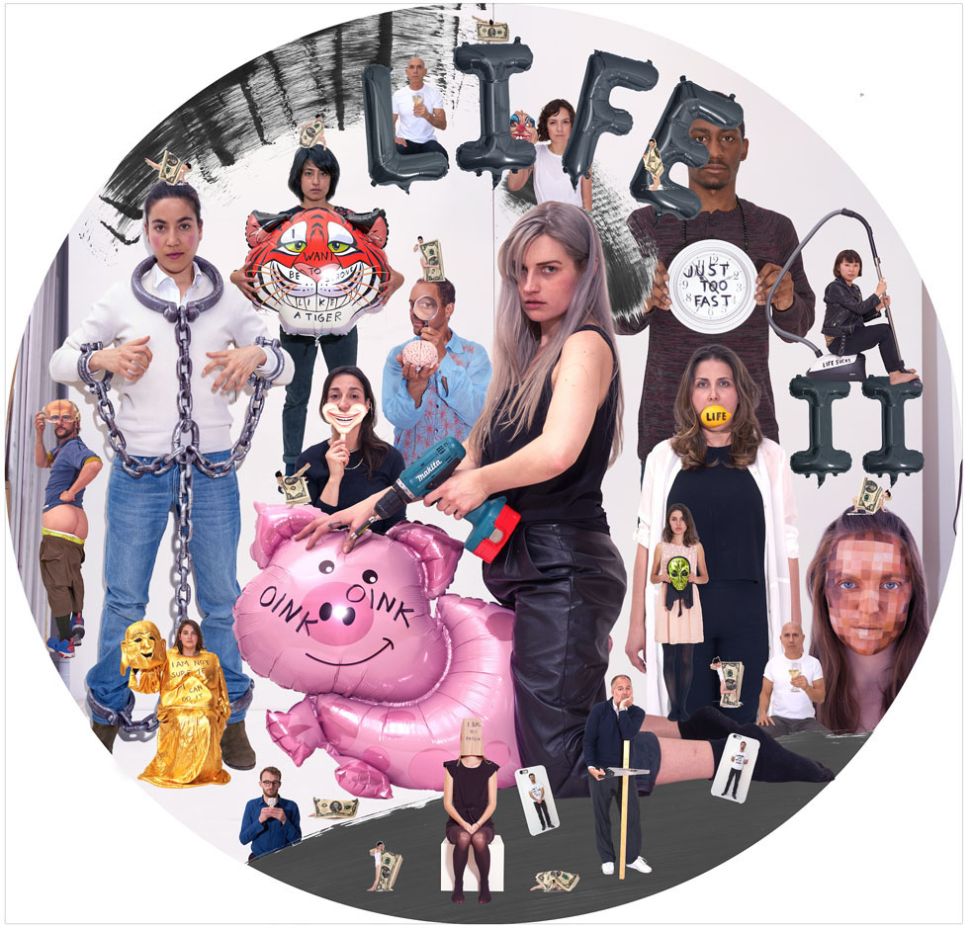