How many times has the following happened to you?

No, I know. Everybody says it’s really goo—

That Other Friend Who Never Pays For The Cab:

That Guy Who’s More Mike’s Friend Than Yours And Who You Hate Being Alone With:

I’m so jealous that you get to watch [title of tv show] for the first time.

That One Friend Of Yours:

I know, right? We told you so!

Yeah, but I didn’t realize it was like AMAZING amazing.

I literally said those exact words to you.

Yeah, but I didn’t know you meant like “AMAZING AMAZING amazing.”

All Of Your Friends Except For Rob Who’s Still On Vacation Despite Never Having A Job, His Parents Must Be Richer Than You Thought:

When it comes to TV, we’re currently dealing with an embarrassment of riches. At present, there exist enough “AMAZING” tv shows that the average human being doesn’t have enough hours in his or her life to watch them all. While seemingly a great thing, the rain cloud to this silver lining is that this makes it particularly difficult for new shows to find an audience. Why waste your time watching a new show that hundreds of people have recommended to you, when you still haven’t watched the other show that thousands of people have recommended to you? If the new show is truly good, you can catch up on it when it hits season 5.

But how does that truly good new show make it to season 5 when the current anthem of our generation is…. “Fuck your showtimes telling me when to watch TV. The new episode airs Wednesdays at 10:30pm? No it doesn’t. Every single episode airs three months later on my laptop at 11am on a Sunday while I eat last night’s delivery thai food.”

This anthem, along with being very cumbersome as far as anthems go, is the reason that a truly great show is about to die. Big Time In Hollywood, Florida is Comedy Central’s first serialized comedy. Produced by Ben Stiller and written by Dan Schimpf and Alex Anfanger, the show centers around two brothers/wanna-be filmmakers in their late twenties (played by Anfanger and Lenny Jacobson). In the first episode, their parents ask them politely to move out of their house. In the final episode of the first season, these two brothers are caught up in the middle of an epic shootout between the FBI and a drug cartel. The journey between these two points is well worth postponing your binge viewing of Peaky Blinders.

In no particular order, here’s a random smattering of events that occur on the brothers descent into the seedy underbelly of Hollywood, Florida. The boys accidentally get a drug addict (played by Ben Stiller) shot roughly 500 times. A thong wearing Cuba Gooding Jr. snorts cocaine purchased with 50 dollars he stole from Steven Spielberg. Jason Alexander says “Fuck Seinfeld” in the middle of discussing his latest project, human trafficking. While seemingly random, all these events logically connect within the arching storyline.

Often the argument to give a show a second season comes with the caveat, that said show is not currently great but needs a second season to find its voice. Big Time In Hollywood, Florida needs no such caveat. Its voice is clear, loud and booming. The people currently watching the show are loving it, but unfortunately for those people, there aren’t that many of them. The show has received rave reviews, but unfortunately even fewer people are reading than are watching new TV shows. (Ed. note: Gee, I hope not!)

During its production, Big Time In Hollywood, Florida came to be a living representation of all of my shortcomings. When I thought about the show, I saw only how I had failed at something…Then I watched the show.

This article is a desperate plea for you to now, not two years from now, but immediately  go to Hulu.com and binge watch the first season to ensure that there will be a second one.

After all, where we’d all be if we’d never gotten a second season of shows that debuted to low numbers? No Community, no The Office, no Parks and Recreation, and no 30 Rock. What would that world be like to live in?? Essentially the same? Or run by Nazis?? There’s really no way to know.

I could continue to tell you that this show is amazing. That it’s hilarious and, at times, emotionally moving. That it’s filled with fully realized characters and pitch perfect performances. That it has an endlessly entertaining serialized storyline that resolves fantastically in the final episode. But these words won’t really mean much to you. Because you are not me, you don’t know what I mean when I tell you this show is amazing. But this might help you realize it.

Last year, I got to write and shoot a Comedy Central pilot with my writing partner, Brian McElhaney. This was great. Comedy Central passed on the show. This was not great. However, it was a honor and a privilege just to get to shoot the pilot in the first place. A honor and a privilege that was completely overshadowed by the fact that MY ROOMMATE and dear friend, Alex Anfanger’s Comedy Central pilot Big Time In Hollywood, Florida had been picked up to series. Alex and I have been close friends since college and are currently living together in LA. He’s a very charming, funny, talented actor and writer, who I now hate with all of my heart. There’s really nothing like the success of a dear friend to send you into a deep depression.

During its production, Big Time In Hollywood, Florida came to be a living representation of all of my shortcomings. When I thought about the show, I saw only how I had failed at something. I knew I would eventually have to watch the show and tell Alex my opinion of it. And at this point it was looking like my opinion was going to be “Really good job man, though why does the show have no audio except for the sound of my father’s voice in my head telling me that I am inadequate.”

Then I watched the show.

Midway through the first episode, all my jealousy washed away. Not because I wasn’t still jealous, I very much was, but because the show was so good it actually transcended my petty feelings. The insecure part of my brain was still telling me I was a failure, but every other part of my brain was saying, “Shut up, we’re trying to watch this.”

If Big Time In Hollywood, Florida gets a season 2 it may twice multiply my failure and make me feel even worse, but it will also mean that I get to watch more of what has become my favorite show on television. If it can win me over, it can sure as hell do the same for you. Trust me, it’s AMAZING amazing amazing amazing.

Nick Kocher is a comedian living in LA and one half of the comedy troupe BriTANick. You can find him at @NickKocher on Twitter, and I highly recommend watching his senior thesis film, Eagles are Turning People Into Horses. 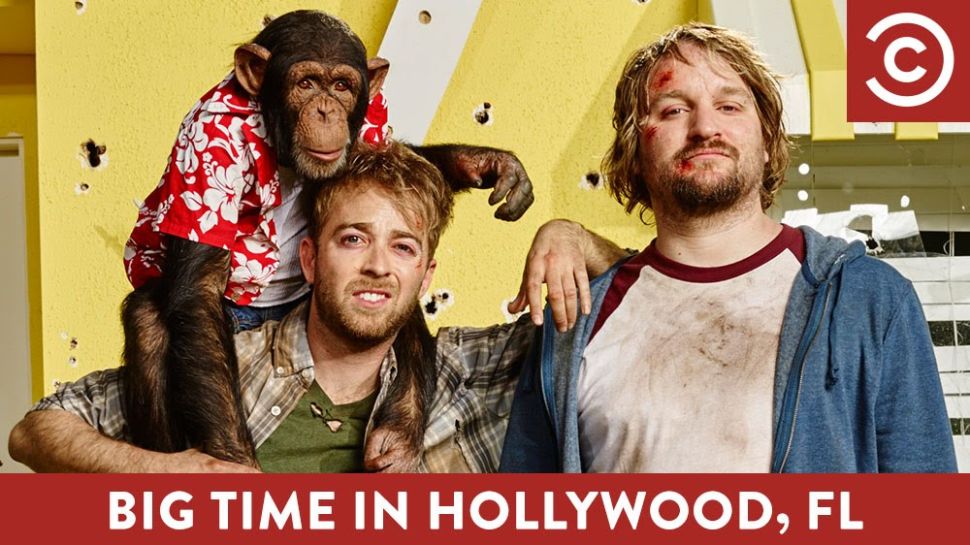