Christ on a cross street, I don’t even recognize my old block any more. The Lower East Side, Hell Square, my old stomping grounds. Cafe Charbon-Epicerie, that old French place where I watched the Zidane head-butt in 2006 is now a bar called Hair of the Dog. The rundown Slipper Room was torn down and rebuilt as The Derby. There’s a new hotel, ghastly and towering where an old tenement was, called The Orchard Street Hotel.

I was feeling blue in the shadow of my old apartment building, looking out onto a streetscape I didn’t recognize. That’s the way lives work too, right? As the years drone on, first one store blinkers out, then another, a new one moves in, a condo goes up until one day you don’t even recognize the life you’re living as a life you recognize or indeed ever wanted. I had The Feelings.

Wassail was the tonic. A new restaurant on an unrecognizable Orchard Street, it’s owned by Ben Sandler and Jennifer Lim, who also own Queens Kickshaw. The chef is Joseph Buenconsejo and the pastry chef is Rebecca Eichenbaum. It is the only dedicated cider bar in New York City. It is vegetarian. It is unlikely. It is strange. It is a revelation.

We are in a golden era for beverage pairings. Wine, the megalith, still has a near monopoly in fine dining, but on the outskirts, restaurants like Luksus in Greenpoint are exploring the wealth of options other drinks like beer can offer. Now a handful of restaurants including Eleven Madison Park and Gramercy Tavern both have respectable beer programs. But cider is an untapped world.

At Wassail, there are 12 draught and five by-the-glass ciders on the menu. There are ciders that defy whatever weird notions one might have about cider if one had notions at all. I, for one, had long associated cider with beer, in no small part because that is how cider is generally shelved. But, as Dan Pucci, a wildly knowledgeable cider director with a Pontormo face, explains, “cider is much closer to wine.” Cider and wine have fruit; beer doesn’t. I suppose one also can point to carbonation. But there are still and sparkling ciders just as there are still and sparkling wines. Even as the beer and wine dichotomy becomes increasingly meaningless vis-à-vis depth, variation and value, this whole cider thing is a real hoot. I sound like a newbie here. I am a newbie here. But Christ, how exciting.

As for what comes out of the kitchen into the warmly lit space with marble counters and filament light, Mr. Buenconsejo’s menu is hearty. It is also hearthy, which is both hearty and healthy and homey—and vegetarian. I’ve eaten extremely well as a vegetarian restaurant critic but didn’t realize how stifling having to choose was until presented with a menu like this where no choice is necessary.

Everything is so new in the cider world—a world partly spurred by one of the bar’s co-owners, Cider Week founder Sabine Hrechdakian—that Wassail has personal relationships with many of the producers, and that translates into some extraordinary offerings. Take, for example, Steve Wood, whose Farnum Hill Dooryard 1411 Selection from 2013 ($9) is available only at Wassail. Mr. Wood, a legend in American cider making, sends essentially grand cru fermentations, reserved especially for the restaurant. (His traditional Dooryard, a blend of varied fermentations, is also available.) Another favorite is Art & Science ($13), a crimson cider made with uncultivated apples gathered as a hobby by Daniel Rinke, the winemaker for Johan Vineyards in West Valley, Ore. It is a beautiful savory cider, as deep as it is refreshing.

Mr. Buenconsejo’s food is similarly unexpectedly rich. There’s a lot of talk about “showcasing the ingredients” but that often is just cover for not having a point of view. Buenconsejo, who most recently was at Hotel Americano, proves one can both let the ingredients speak and marshal them into coherent statements. Dishes like peas, with smoked ricotta and olive oil ($13), expose the vegetal pea-ness of the peas. Some are blanched, some are fresh, some are snow and some are English. Together, bonded by ricotta and given depth by the nutty Argan oil, they are both recognizable and reincarnated. A trio of spinach pasties ($12)—a sort of English empanada—is given vigor by the slight bitter rye flour of its crust, and a cheese-y fondue sauce, which bickers good-naturedly with the sweet leek, spinach and mascarpone guts.

In Mr. Buenconsejo’s doing, even classical preparations feel new. Maybe that’s because by the time they come around one is conditioned to wonder (or that the cider pours are hefty; even around 6 percent APV, cider can fuck your shit up). Layered potatoes ($21) is essentially Pommes Anna, a terrine-full of thinly sliced potatoes and butter, but here a thick slice of it could pass as crispy skate wing. Mustard greens, turnips and a gribiche make it perfect French picnic food, or a late dinner staple.

As for the desserts, where was and who is Rebecca Eichenbaum, in whose hands knotweed, an invasive species, becomes the centerpiece of a thrilling green dessert that combines (toasted) buckwheat, sorrel (sherbet!) and the macerated stalk (juice!) into a sweet jaunt through the forest? She belongs to a new breed of pastry chef who traipses happily across the boundary separating sweet and savory.

Drunk and wobbly after dinner, I felt better. It wasn’t just the food or the cider. It wasn’t the excitement Dan poured as surely as he did the product. No, it was because in that now foreign block, where a younger me once lived with a totally different life who would look at the me now with the same disconcerted bafflement with which I look at the block, I found something familiar. Wassail is just the sort of amazing that happens when one brings the full force of one’s passions to work. Weird, yes, but we are weird. Unexpected, yes, the world is unexpected. Triumphant. Well, some of us are and some of us aren’t, but, as Wassail made me recall, that doesn’t mean one ought not to try. 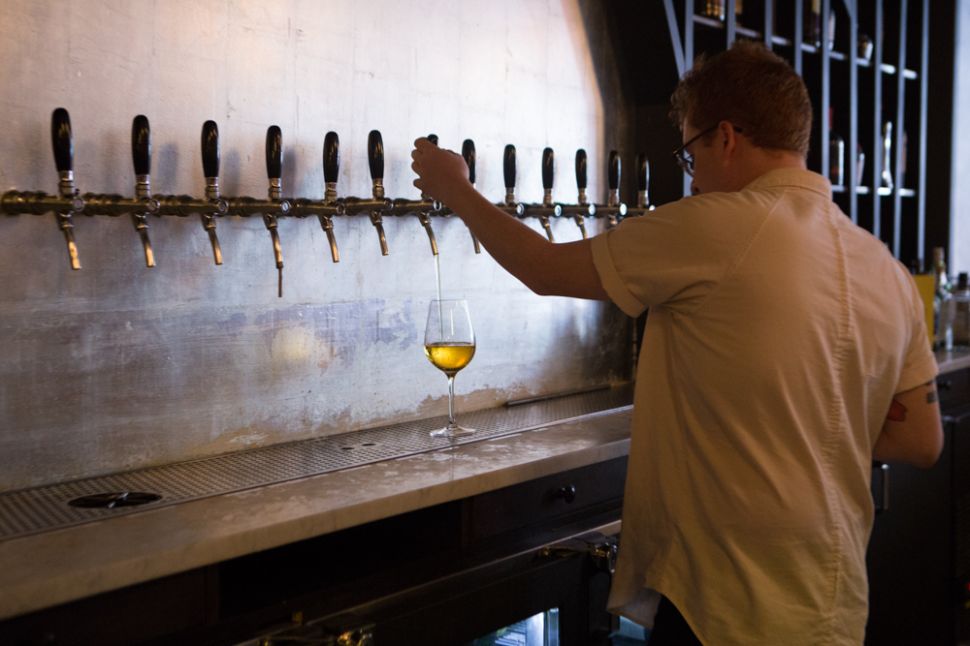