Previously on: A Millennial Reviews

Last night I was staring into Netflix’s familiar red glossy plastic flatland of a menu screen for what seemed like hours, scrolling through categories like “Because You Watched ‘Fireplace For Your Home,’” and “Dark, Cerebral Cooking Shows Set in the 70’s” when I almost gave up and went outside to play with Kanye, my rescue Iguana. Then out of nowhere I came across this show called Friends. Everything that happened my TV screen from the moment I pressed play was a bath salts fueled nightmare: vests, the awkward loose fitting clothing of a doomsday cult, different haircuts in every episode, umbrellas without rain, people swimming in Central Park garbage while easy listening pop rock blared from my speakers. Was this show created by Harmony Korine? What was happening?

Friends is about six degenerate creeps who live in the East Village neighborhood of Manhattan in what I can only imagine is some sort of squatter’s rights situation. They spend all their time lurking in a coffee shop and catcalling women (and men, mind you) instead of asking people out on OKCupid and then not showing up, like normal people. I don’t understand why Chandler has to creep these women out by buying them coffees and offering them sticks of gum. If anyone ever did that to one of my feminist allies I’d slap that java out of their hands and say “nice try, Roofie-O” because I believe in using puns to  pun-ch upward at rapists and men’s rights activists like Chandler Bing. These people are also frequently losing their jobs and not working for weeks at a time which leads me to believe they have to be selling drugs. The fact that they only use manual telephones only solidifies my theory. Using analog message recorders, meeting clandestinely in coffee shops and apartment buildings. Hey I get it, during the summer of 2011 I got fired from my bar backing job for spilling a pitcher of beer on Terrance Malick and when I ran out of money I ended up moving in with The Polyphonic Spree and helping them brew a mixture of LSD and MDMA in a bathtub. I needed the money. I’ve lived in the same types of slums as these weirdos, I just don’t think it makes great television. The East Village is lame. No one cool has lived there since the 90’s. I don’t understand why these people wouldn’t get their parents to buy them a place in Bushwick like the rest of us.

“I tell you, when I actually die… some people are gonna get seriously haunted” – Ross Geller

I could only make out a few semblances of plot through the fog of the show’s disturbing Lynchian direction. Rachel seems to be a runaway bride who now waits tables. I took this as a symbol of American society running away from it’s marriage to Israel and it’s current state of “waiting” for tension with Palestine to reach a breaking point. Then you have Joey who is a sex addict and likes eating meatball sandwiches. Chandler Bing plays the enigmatic iconoclast of the group and is often paired with Joey to contrast the latter’s boorish “kill em all” attitude. Phoebe is the “log lady” of Central Perk, embodying a link between the world of Friends and the occult or even hell itself. Monica is a high strung chef with a business on the line and everything to lose, and her brother, Ross is a corrupt paleontologist complete with illegal exotic pets and a checkered past. The only character who out-creeps the core cast is this gamer-gater named Gunther who saunters about the coffee shop smelling Rachel’s seat cushions and such. Even the main creeps don’t like Gunther. I’m with them.

“We swallow our feelings, even if it means we’re unhappy forever.” – Chandler

When I watched Friends it drew me in, scared me, poured over my mind like molasses. It was like staring into a diamond. Each dreamlike mirage multiplied into ten even more distorted versions of itself, kind of like the time I took ayahuasca with The Animal Collective in Venezuela. The images haunted me… Ross Geller’s polygamous coven of wives, Chandler Bing’s torrid obsession with his scorn Janice, Phoebe Buffay’s cryptic poetry. What did it all mean? I watched it all unfold between swigs of cough syrup and styrofoam boxes of chinese food. Visions of tucked in bowling shirts and teased hair consumed my head like a thanksgiving turkey. I hadn’t consumed this much of something this rapidly since the time I went to Cici’s Pizza with Action Bronson. Over time the show reveals to us more curiosities, like pearls from the abyss. Phoebe’s identical twin sister, Ursula, seduces Joey. Ross becomes consumed with the psychological art of war known as Unagi. Chandler wears thicker and thicker vests. What is he protecting?

“But they don’t know that we know they know we know.” – Phoebe

I struggled to “get” this show but something dark and ominous lurched underneath it that pushed me away. Who was the real father of Rachel’s baby? What did Chandler’s superfluous third nipple mean about his past? What was Monica really cooking? What was smelly cat and what did it feed upon? our dreams? our nightmares? If I thought there were answers to these questions I might have continued obsessing over Friends, but to me this show seems like LOST all over again: lots of mystery with no pay off and a director who’s just cashing in on the concept of being weird. Look, I watched Gummo when I was in high school and I watched Twin Peaks three years ago when everyone started talking about it like they’d known about it since the 90’s, but I have to draw the line somewhere. I can put up with undecipherable hillbilly gibberish, artsy fartsy Jungian symbolism and Kubrickian dream logic to an extent, but asking me to accept Ross Geller’s hair as an acceptable fact in a storytelling universe is a step too far. Friends destroyed my mind. 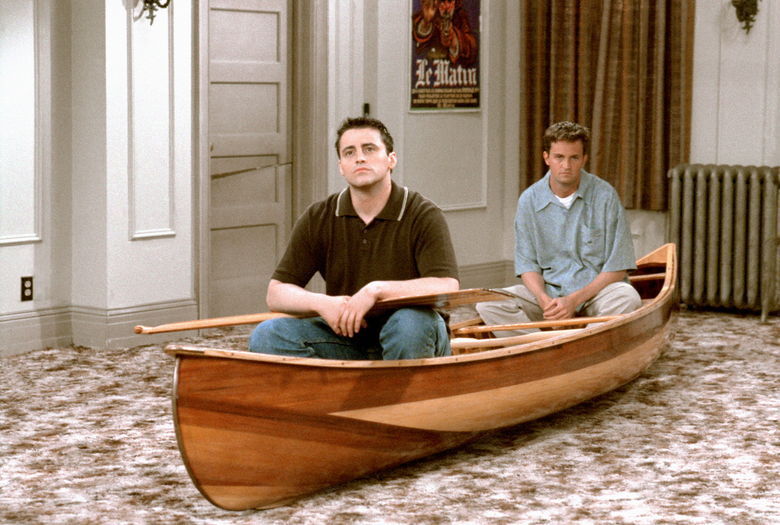