Likening the expiration of rent laws to the deaths of as many as 4,000 Native Americans, lawmakers and activists rallied in Brooklyn today to again assail Gov. Andrew Cuomo and the State Senate for allowing the deregulation of more than a million rent-stabilized units on midnight Monday.

“It’s beyond a slap in the face. It’s the most egregious decision ever placed before humanity in my lifetime in New York City,” Ms. Cumbo declared. “This is something that is going to impact us, as I said, in Albany. This is our modern day Trail of Tears. This is a modern day movement and devastation of our communities.”

The Trail of Tears refers to the forced removal of Native Americans in 1838 and 1839. As part of President Andrew Jackson’s Indian removal policy, the Cherokee nation was forced to give up its lands east of the Mississippi River and to migrate to present-day Oklahoma. During the forced march, thousands of Cherokees died of disease, exhaustion and hunger.

Though only Ms. Cumbo likened the temporary end of rent regulations to the Trail of Tears, Mr. Adams was only a bit less dire. Holding aloft a blanket, he said he would be joining tenant activists in sleeping outside Mr. Cuomo’s Midtown office tonight. (An Adams spokesman said the NYPD had approved the sleepover.)

Activists from left-leaning organizations including Make the Road New York, Alliance for Tenant Power and New York Communities for Change will join him.

Mr. Adams, a former state senator, lay some blame on pro-landlord Republicans but said Mr. Cuomo needed to compel conservatives to act, like he did when he engineered the legalization of same-sex marriage in 2011.

“So you can’t take credit for the good times and then point a finger somewhere else during the troubling times. What Albany needs right now is a chief executive of the state to lead us,” he said. “Everybody’s responsible but there is a leader that’s supposed to lead and bring everyone together.”

Mr. Cuomo angered liberals and tenant activists when he said, just before the deadline on Monday, that he favored a straight extension of existing rent laws so the State Legislature could have more time to work out a deal. While he has expressed support for certain policies championed by the left, like vacancy decontrol, activists say he is disingenuous and too beholden to the real estate industry. Assembly Democrats passed their own bill strengthening rent regulations, but Senate Republicans rejected it, favoring instead a straight eight-year extender of the current laws. The two sides are at an impasse.

“We’re saying to over one million rent-stabilized [residents]: You are not our priority. Your housing is not our priority,” Mr. Adams said. “Well I’ll be damned if that’s the message that’s gonna come out of Brooklyn.” 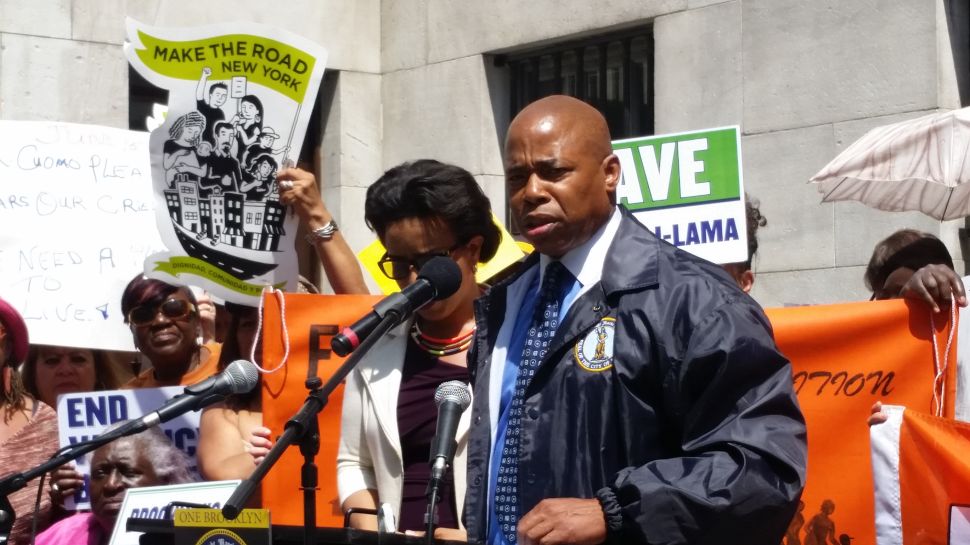