In the continuing saga of the IRS, the Department of Justice, and their efforts to hide evidence and obstruct justice to protect Lois Lerner and the administration’s targeting of its political opposition, the IRS now claims that thousands of emails found on backup tapes Commissioner Koskinen told Congress did not exist are not IRS records, the IRS has no control over them, and they can’t produce them. In fact, the IRS won’t even say whether it has the thousands of additional “lost” emails. And down the rabbit hole we head—where “up means down” and “stop means go.”

Knowledge of Ms. Lerner’s abuse of power within the IRS to target conservative groups for harassment and denials of tax-exempt status surfaced more than two years ago, along with apparent links to the White House. Congress has been investigating, but the IRS has repeatedly lied and stonewalled. The Treasury Inspector General issued a report, acknowledging the abuse and improprieties and is now in the midst of a criminal investigation. The Department of Justice has done nothing.

In one of its more stunning developments, IRS asserted that Lois Lerner’s computer had crashed, preventing any ability to recover her emails. Even more shocking, soon the claimed crashed expanded to everyone in the IRS who was involved with Lerner—more than 20 computers. Of course, we all knew that there are backups and copies on servers, Blackberry, and other devices.

Nonetheless, Commissioner Koskinen told Congress that the IRS did not have backup tapes of Lois Lerner’s emails. He claimed the IRS had worked hard to try to find them, but they had been destroyed.

Watchdog non-profit Judicial Watch filed a Freedom of Information Act lawsuit that landed in the court of federal judge Emmett G. Sullivan, about whom we have written several times. Judge Sullivan is the extraordinary jurist who appointed a special prosecutor to investigate the Department of Justice and its Public Integrity Section lawyers for their corrupt prosecution of former United State Senator Ted Stevens from Alaska.

Judicial Watch has kept the pressure on the IRS, and Judge Sullivan strives to apply the same rules to the government as the government seeks to apply to everyone else. Thanks to Judge Sullivan, despite disingenuous—and perhaps deliberately deceptive—affidavits filed by the Department of Justice attorneys in his court, we learned that the IRS deliberately destroyed Lois Lerner’s Blackberry after it knew the computers had “crashed” and after the Congressional inquiry was well underway. And more computers crashed.

Notably, the Treasury Inspector General for Tax Administration (TIGTA) belied Mr. Koskinen’s claims within a day—finding the first 744 “non-existent” backup tapes containing thousands of emails exactly where they should have been. Upon further review, the Inspector General identified a missing document, which quickly led to an additional 424 tapes of backup emails—all from the IT department of the IRS in West Virginia. Mr. Koskinen had not even asked them about the tapes.

The Department of Justice did nothing. Many people have been prosecuted, convicted and imprisoned for far less in the way of perjury.

Judge Sullivan required repeated sworn filings from the IRS. He even assigned a magistrate judge to oversee efforts to find the missing emails. It was during that process that government counsel filed two sworn declarations, obfuscating or eliding the truth that IRS destroyed Lois Lerner’s Blackberry despite the Congressional inquiry and the claimed computer crashes. Yet, to date, the IRS has not provided all the emails to Judicial Watch or identified what was found on the 1,268 backup tapes.

Now, according to the most recent filing by Judicial Watch, the IRS asserts that the emails are not records of the IRS. Being a Texan, I’m not 100 percent sure how to pronounce it, but “chutzpah” is the only word to describe this latest assertion. To borrow from Lewis Carroll, “Imagination is the only weapon in the war against reality.”

It took Judge Sullivan only two days to grant Judicial Watch’s request to require IRS to disclose whether all emails the inspector general found have been turned over to the IRS, where it stands in the review process, and how many of the 1,268 tapes have been processed for recovery or when that process will be complete.

Stunningly, in its response the IRS again said nothing. It simply punted to the Inspector General. It claims that because of that investigation, it cannot disclose more Lois Lerner or other emails. It just stalls.

How much longer will Judge Sullivan wait? He is a patient and careful judge, but he is not one to ignore reality. The Inspector General should have a fair amount of time—but not much longer.

If the IRS won’t provide information, set and meet a deadline, perhaps Judge Sullivan will turn to the Inspector General to answer his questions. If neither does, Judge Sullivan still has the option of naming a special prosecutor.

President Obama was right when he said there isn’t “a smidgeon of corruption in the IRS.” Rather, it is rife with it. Someone needs to end the madness, and teach the IRS that stop means stop. 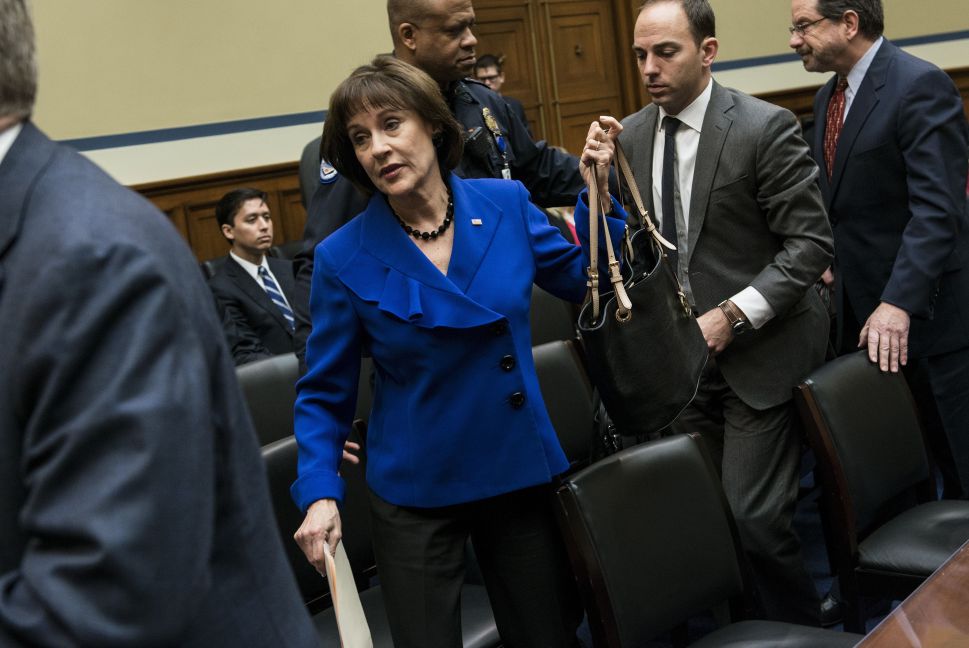