Whimsy and sentimentality are not an easy mix for a satisfying movie, and they clash jarringly in Manglehorn, a dull, pretentious trifle from director David Gordon Green with Al Pacino in another of his late-career mishaps that does nothing to elevate his fading film status. How I wish he would stick to the stage.

AJ Manglehorn is a lonely, angry, mean-spirited and reclusive small-town Texas locksmith whose life is as tedious as his profession. Every morning he opens up the shop, changing an occasional light bulb, taking an occasional emergency call like a mother whose child is accidentally locked in a car, and eating bad food because it’s cheap. Keeping himself at arm’s length from anything that resembles true feelings, his personality changes only from bouts of depression to bursts of violence. He hates his ex-wife, he’s lost touch with his only son, he has no friends, and he lives in solitude with his furball cat Fanny in a modest house cluttered with junk.

The dialogue consists mainly of leaden internal monologues with an old girlfriend named Clara, who is never seen. She left him long ago, but he is still surrounded by hundreds of letters he has written to her through the years, unread, unopened and marked “Returned to Sender.” The talk is boring. The characters Manglehorn runs into are boring. Although less hammy than usual, Al Pacino is boring, too.

When a brief respite from his emotional prison is offered by the film’s warmest and most vulnerable character, a sweet bank teller named Dawn (played with honest compassion by a heart-melting Holly Hunter), it feels like Manglehorn might come to life at last. But, true to form, he takes her on an awkward date to a nondescript cafeteria for a curdled dinner, rejects her friendship cruelly, and spends the whole time talking about how superior Clara was in the past. Deeply wounded, she asks politely, “Could we change the subject?” So he talks about how beets always give him diarrhea.

Instead of spending time with a nice woman in need of companionship, he goes to a brothel masquerading as a massage parlor, then flies into a rage when he sees the price. When his yuppie son Jacob (the excellent Chris Messina), a successful commodities broker who lands in hot through some shady business deals, swallows his pride and turns to him for fatherly advice, Manglehorn rejects him, too. By this time, I was so fed up with this miserable old fossil I lost interest in what happened to him. When he finally realizes the mistakes he made, throws out the ghost of Clara along with all of his other memoirs, and returns to Dawn for forgiveness, I failed to suppress a yawn. How Manglehorn reforms and seeks redemption is less plausible than the parting of the Red Sea.

Director Mr. Green specializes in reckless, misunderstood reprobates who turn sensitive before the end (think red-eyed Nicolas Cage in Joe and all of the idiots in Pineapple Express). But the sappy, one-dimensional script full of metaphors by Paul Logan (the nest of hornets in the mailbox, the premise that a locksmith holds the keys to everything except his own heart) is so annoying that you quickly lose interest in second chances. I didn’t buy the promise of humor and insight in the mixed reviews that greeted Manglehorn when it premiered a year ago on the film festival circuit. Like its star, time has not improved it. 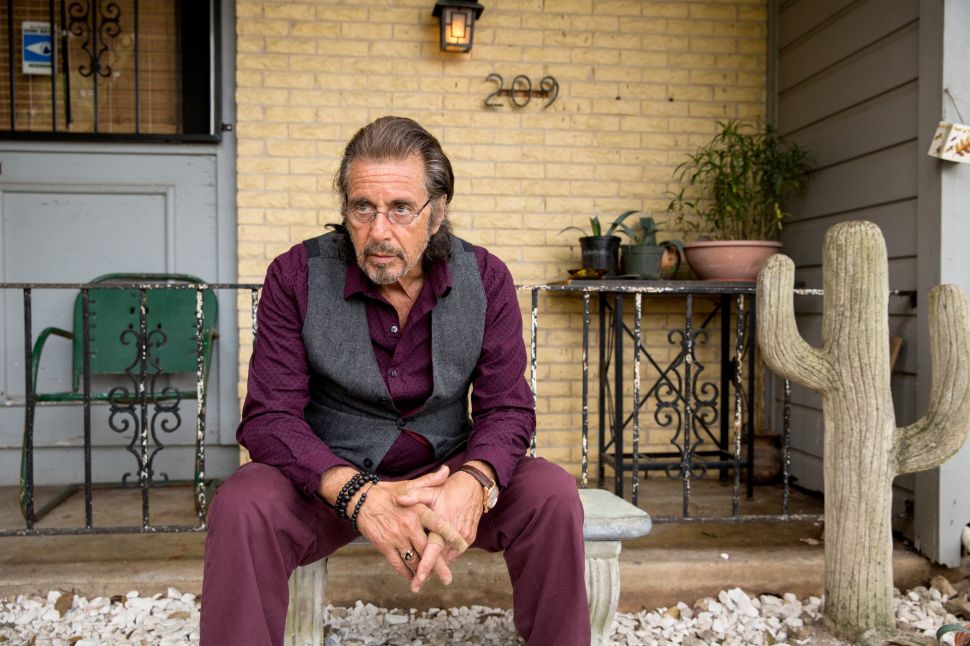