AMC’s newest drama, Humans, features a look at the latest must-have gadget for any busy family —  a Synth, which is a highly-developed robotic servant, eerily similar to actual human beings.

Through several concurrent story lines set in the ‘parallel present,’ Humans explores the emotional impact that stems from the blurred lines between people and machines.

One of the main storylines features the Hawkins family who has just purchased their first Synth, Anita. When wife and mother, Laura, becomes suspicious of Anita’s actions, the family discovers that life with a machine is not simply the convenience they thought it would be, but that the acquisition has opened them up to a host of unforeseen problems.

In another narrative, the older Dr. George Millican is dismayed at the thought of the demise of his current Synth, Odi, and it turns out that his fears are absolutely not without merit.

A third storyline features a rogue individual named Leo trying to help a group of independent thinking Synths escape from those trying to capture them.

All of the storylines explore various aspects of the human condition and the Synths’ place within that world—or—is it the other way around?

Sam Vincent and Jonathan Brackley, the writers behind the series, explain that society’s increased reliance on technology helped create the foundation for the narrative. “Humanity is only going in one direction. We’re not going to suddenly slam on the brakes on technological progress,” says Vincent. “We’re going to keep going, so it’s a matter of adaptation and preparation and understanding how this is changing us. That’s what this show is about. At its core, it’s about how technology is changing us and how will it continue to change us.”

“Technology has become so much more complicated and powerful that maybe there’s a little bit of unease about the disconnect between the mysterious, ever-increasing power it has, and yet its seeming ability to understand us better and better, even as we understand it less and less,” adds Brackley.

The men were careful not to make any judgments about the use of technology in the series, choosing to let viewers drawn their own conclusions. “We tried very much in the show to be quite neutral on the question of whether or not this was a good or bad thing. We wanted to show lots of good aspects of it, and lots of bad aspects of it and let the audience decide. We’re presenting it as neither a utopia nor a dystopia,” reveals Vincent.

Although Humans is set in a highly evolved parallel present universe Brackley admits that there are some ‘creepy’ tech issues that are present right now in society, “I’m still freaked out by ads that are targeted at me because of things that I’ve looked up on the Internet. That still freaks me out because I often forget that I’ve looked for the thing in the first place. So, when I see the ad I think, oh, my God, they just looked into my brain, but then I’ll remember that I probably searched for it on Google about half an hour before.” Vincent adds “That’s true. But what’s happening there is that your thought process has that natural practice of forgetting. That’s when you know that technology has taken advantage of the fact that you forget to sell you something. That’s kind of scary.”

Brackley thinks that synth technology, or something like it, isn’t really that far off. “I personally think that the last few years our everyday technology, our phones, iPads, and computers, etcetera, have become so much more intuitive in the way we connect to them. We now conduct our personal and professional and emotional lives through social media which we access via our phone or our table or computer. That process has kind of increased exponentially over the last decade and along the way our technology has become seemingly more able to understand us. Case in point, Siri on the iPhone. We no longer have to have a kind of complicated system of input and interfaces. We can just speak to our technology and it will understand us.”

Many will argue that technology only offers the illusion of bringing people together when it in fact is isolating individuals. To this Vincent responds, “We spend so much time expressing ourselves through technology and that’s a very singular type of thing, but there are people who might never have had the chance to meet or interact if it weren’t’ for technology. I think technology is bringing us together in new ways and pushing us apart in other ways, but think maybe that’s the way it’s always been in a way.” To this he adds, “You know, when the telephone was invented there was a huge amount of worry that it would have all kinds of strange effects on human relationships, but we seem to have endured. I think we just keep adapting.”

To create their unique vision of this modern-day robot tale, Vincent reveals what inspired the writers. “We went back to Asimov’s short stories about robots. There’s a very thick volume you can get and there’s about 50 robot stories in there. He was definitely a big influence.

And then we also have to thank of all the wonderful instances of robots of various kinds that we’ve seen in cinema — things like Blade Runner, the film A.I., and 2001. I think 2001 (central ‘character’) Hal is probably my favorite example of artificial intelligence in the cinema of all time. We just had to work hard to learn what we could from these references and try to avoid doing anything too similar to them and find a new perspective on this idea that we’ve been fascinated by since Frankenstein, if not before.”

For the actors to create the Synth characters Brackley reveals that there were a few rules put in place right from the start. “In terms of the how the Synth behaves in their Synth movements, in the original pilot script we wrote in the stage directions that they moved like someone doing a Japanese tea ritual, and that was the only real information that we gave apart from the fact that we stipulated we didn’t want anything sort of classically robotic, no sort of head cocking or curious looks.” Vincent adds with a laugh, “It actually said, ‘No Head Cocking’ in capital letters in pilot script. Brackley goes on to explain a bit more, saying, “When we got our director on board, Sam Donovan, who directed the first two episodes, he worked to develop a sort of a language of movement of how these Synths would move. All the movement was kind of borne out of a practical thought — these machines just use up a huge amount of battery power, so there would never be a wasted movement and they’d be very economic with how they move so that would make them very slow and graceful. So all our actors who played Synths went to ‘Synth School’ to learn how to move and behave.”

Vincent and Brackley are fully aware that there may be skeptics out there who cannot envision a fresh take on a ‘robot story’ but the men assure that Humans offers a unique journey. “I would say that we are the only show about people’s relationships with their technology that is on at the moment and that’s a pretty big thing,” says Vincent. “There’s certainly no other show on TV that explores this world in a 360 degree way of looking at so many different aspects, and that’s even before you take into account that there are robots in it too.”

For those that are tech averse, Brackley offers this enticement to watch the series, “The fact that we have a regular everyday family that’s the heart of the show I think will draw people in.  Add to that some mystery about personal intent and the thrill of the unknown and I think it’s quite a ride.”

Vincent adds, “Simply put, with all tech aspects aside, we wanted to do a story about how we can invest so much in inanimate objects, about how we can have a rich and fulfilling emotional relationship with something that doesn’t feel the emotion back. That’s a pretty interesting concept to explore, one that really applies to everyone, and we definitely do that on Humans.” 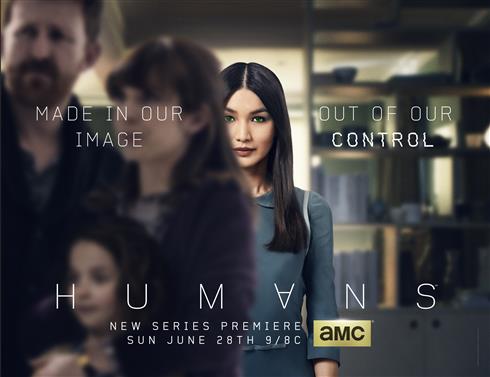