Keith Wright, chairman of the Committee on Housing in the Democrat-dominated Assembly, told reporters today that the Republican State Senate has refused to negotiate on the subject of rent laws—even as the regulations affecting more than one million apartments and more than two million tenants are set to expire on Monday.

The Harlem assemblyman convened an “emergency meeting” with City Council housing committee Chairman Jumaane Williams and several other elected officials to discuss the possibility of the city’s housing laws dying in Albany and regulated apartments suddenly entering the market. Mr. Wright revealed that he had not been able to even meet with crucial figures in the State Senate to work out a renewal bill that might pass both houses.

“Let’s be real: they have not wanted to negotiate. They have not wanted. I can tell you right now, I have tried to make at least five appointments with a very key person in the State Senate, and they cancelled all five meetings. And when I did corner them, they, it was like talking to the wall. They do not want to touch this issue,” he said.

Mr. Wright would not reveal the identity of the person in question. He nonetheless stood by his statement last week that he would not allow the controversial 421a tax break for developers, which Republicans hope to extend, to be renewed this year unless Albany also passed more tenant-friendly rent laws.

“Our main priority is to make sure we can strengthen and reform rent regulations,” he said.

Mr. Williams, Public Advocate Letitia James and Brooklyn Borough President Eric Adams, on the other hand, argued the onus is on Gov. Andrew Cuomo to place pressure on the GOP majority State Senate to make a deal. Mr. Adams, a former state senator, asserted that Mr. Cuomo had successfully pushed through his priorities in the past and had the power to extend the legislative session well past its scheduled end-date next week.

“I spent time in Albany. I know the ability of the governor when he’s serious about something,” Mr. Adams said. “It’s really time for the governor to follow the Assembly lead, and not allow the Republican-controlled Senate to allow this to take place.”

Mr. Cuomo’s office referred the Observer to comments the governor made Wednesday declaring his support for reforming rent laws, and announcing his intention to keep the legislative session going until new rent laws are in place.

“Rent regulations, I would like to see an improvement on the rent regulations, not just an extension,” Mr. Cuomo said. “So I’m advocating for an improvement. At a minimum, I believe you need an extension and you need a resolution because otherwise you will have mayhem on Monday when those laws expire. And you could theoretically have an unscrupulous landlord who starts to evict people or raise rents. It could be real pandemonium.”

Rent laws expired for 48 hours when they last came up for renewal, before the State Senate and the Assembly reached an agreement to extend the regulations. The bill they passed retroactively re-stabilized any apartments that might have been de-regulated during that two-day span.

All officials present emphasized that most tenants should be protected by their leases from imminent eviction, and vowed to launch flyer campaigns to notify New Yorkers of their legal rights and recourses. 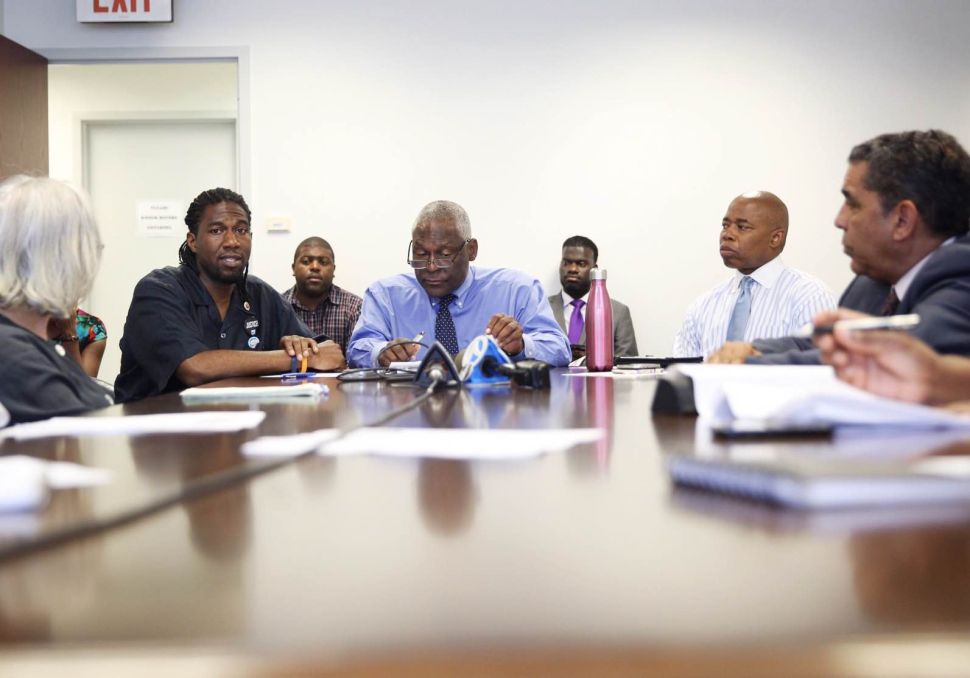