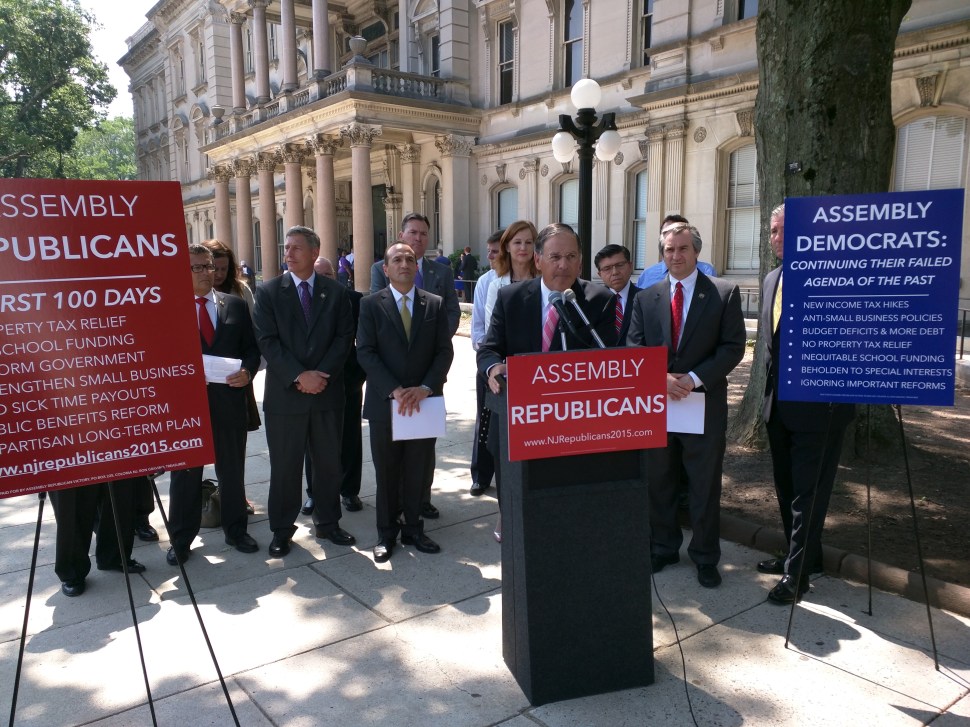 TRENTON — In an off-year election when the field appears already set, and most political experts and observers see less than a handful of competitive districts up for grabs, Assembly Republicans are not lowering their hopes for gaining control of the legislature’s lower house come November 3rd.

In fact, if their press conference outside the statehouse today was any indication, they’re raising them.

“Well, if you’re saying that we can’t win a majority, I think you’re wrong,” Assembly Minority Leader Jon Bramnick (R-21) said when PolitickerNJ asked what’s the purpose of theatrics when most districts in the state this year are essentially noncompetitive. “It’s simply a question of whether we can motivate people to take this election seriously as a potential for change.”

Bramnick joined other Republican leaders gathered on the sidewalk outside the building this morning to renew the caucus’ promise to win back a majority in the lower chamber in November, when Assembly candidates will top ballots across the state for the first time since 1999. Bramnick, who wants to be speaker, is hoping to flip at least nine Democratic-held seats to win Republicans a majority in the lower house for the first time since Democrats took over in 2002.

But it’s not going to be easy — if at all even feasible. Political experts and observers note that there are really only three districts where a Republican upset might be possible, a result of voter demographics, Democrats winning the last redistricting battle in 2011, and the lack of up-ballot races to fuel turnout at the polls. Two are South Jersey’s first and second legislative districts, where Republican Assemblyman Sam Fiocchi (R-1) and Chris Brown (R-2) and their running mates are facing off against Democratic Assemblyman Bob Andrzejczak (D-1) and Vince Mazzeo (D-2) and their runningmates. Another is North Jersey’s 38th legislative district, where Democratic incumbents Tim Eustace and Joseph Lagana (D-38) are facing a challenge by River Edge Councilman Anthony Cappola and attorney Mark DiPisa.

Still, Republicans insist they see an opportunity in all contested districts, and are using a 13 year legacy of Democratic leadership in Trenton, which they say has been a disaster for the state and its economy, to make their case to voters.

“What we’ve heard over the last thirteen years is the same complaint: that New Jersey is simply not affordable,” Bramnick, surrounded by a scrum of fellow Assembly Republicans, said. “That didn’t happen by accident. It happened because my friends across the aisle made bad decisions and raised taxes over a hundred and 14 times.”

“Now, that doesn’t mean that it’s personal. I like Vinnie Prieto. I like members of the state Assembly Democratic caucus. They just did a bad job,” he added.

Republicans present decried the policies implemented by Democrats in the Assembly over the last several years, including, they said, minimum wage increases income tax increases, payroll tax increases, initiatives on paid sick leave. While Democrats may criticize Christie for the state’s dire fiscal climate, they argued, it’s actually the Democrats themselves that are responsible for the crisis, one defined by credit downgradings, the budget shortfalls, and a pension and benefit system now $80 billion in the hole.

Bramnick called Christie a “stopgap,” the “only thing between your wallet and the state Assembly Democrats.”

“Right now, I think the Republican caucus is probably the light at the end of the tunnel for businesses,” said Assembly Republican Conference Leader David Rible (R-30). “The business community here in the state of New Jersey drives our economy, drives out job growth, drives our home construction. We need to do better for our business owners.”

“What it’s about is formula,” added Republican Whip Scott Rumana (R-40). “The Democrats’ formula is all wrong. We’ve had increased spending, increased taxes, job loss, and people leaving our state. It’s a bad formula. The way we can correct that, is by giving us control.”

The group also railed against Democrats’ position in current budget negotiations, which seem all but gridlocked as the state approaches the end of the fiscal year on June 30. Part of that gridlock has been fueled by disagreement over how to fund a beleaguered pension and benefit system, with Republicans siding with Christie in calling for further reforms to the retirement fund  and Democrats vowing to propose a budget with a full payment, likely to be funded by a millionaires tax. This week’s Supreme Court ruling exacerbated those tensions, and Democrats, led by Senate President Steve Sweeney (D-3), said they are open to plans by union leaders to push a constitutional amendment that would require a fully-funded system.

Bramick said it would only result in more taxes.

“That’s not only the beginning of increased taxes. That is a promise to New Jersey that the Democrats will bring you new taxes,” Bramnick said.

Asked whether lawmakers will be able to address those issues in this year’s budget, given the presidential ambitions of Christie and the November Assembly races, or whether it will be a repeat of last year, when little progress was made toward finding significant solutions, members of the group said it was unlikely.

“We already know what the budget is going to look like. We knew it months ago, when our friends across the aisle made a phony, false, destructive promise to simply fund the pension system. The money isn’t there,” said Assemblyman Declan O’Scanlon (R-13), adding reporters ought to just “rerun your old stories, rerun our quotes.”

“Sometimes I feel like it’s the movie Groundhog Day around here,” added Assemblywoman Caroline Casagrande (R-11). “You know how this story ends, you’ve read this book before.” 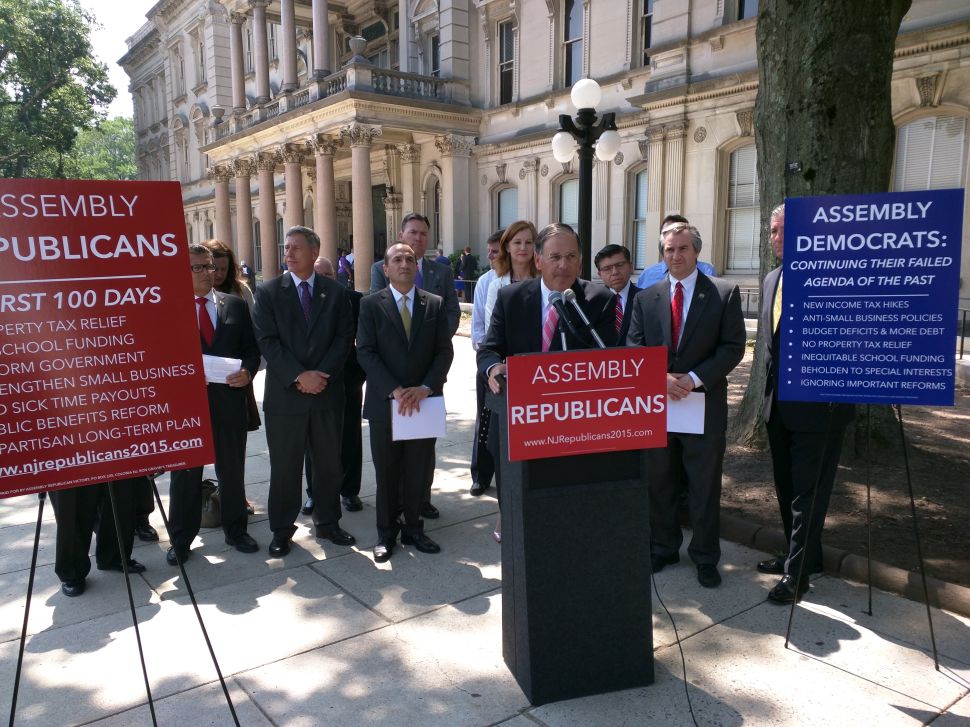