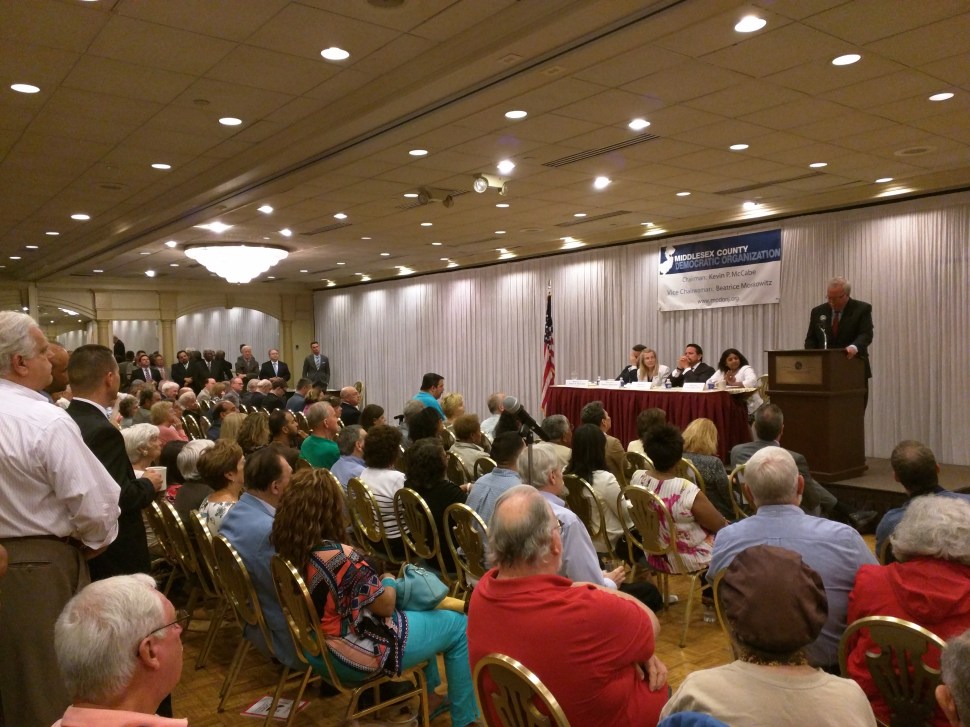 EDISON — Unwitting observers who were lucky enough to be standing in the Pines Manor ballroom off Route 27 both last night and tonight probably got two vastly different impressions of the present state of party politics in Middlesex County.

At the first, observers would’ve witnessed the Edison Democratic Committee chairman election, an at-times tense affair that resulted in a surprise loss for the party establishment. Local Police Officer Keith Hahn triumphed by two votes over outgoing Chairman Doc Paterniti own pick, raising nagging doubts about the unity of a Democratic organization in the second largest county in the state.

Tonight, however, they would’ve gotten a different impression — one aimed specifically, it seemed, at crushing any of those questions or misgivings left lingering the night before. At the county’s Democratic reorganization meeting, leaders from up and down the party made pains to assure attendees that any political infighting was behind them, and that they were moving forward as a united front toward all those important issues, both local and statewide, facing the party today.

The meeting saw the easy re-election of Middlesex County Democratic Chair Kevin McCabe and Vice Chair Beatrice Moskowitz, buttressed by the dual support of Smith and Woodbridge Mayor John McCormac. Both took to the stage to praise the pair’s leadership over the last two years, despite the fact that Republican Gov. Chris Christie drubbed home county Democrat Barbara Buono by 18 points in Middlesex in 2013 while cruising to victory statewide.

“Incompetent fool,” Smith repeatedly called Christie, and played up the impending role that Middlesex County will have in the coming gubernatorial battle, at which time the organization will be just as “relevant,” he said.

“It will be Middlesex County’s decision,” Smith bellowed at the mic to a room packed with local pols from across the region, including local labor leaders like PBA President Patrick Colligan and operatives like Julie Roginsky.

The union of Smith and McCormac was of particular relevance for the unity narrative, as it was once their own relationship that served as a source of disunity in the county. The two Democratic figureheads — one a state senator whose district includes the largest portion of Middlesex in the state, and the other a mayor of a town that claims 136 of a total 144 county committee seats, coming second only to Edison itself — have a history of conflict. This time two years ago, for example, each backed different candidates for the chairman nomination, McCormac siding with McCabe, and Smith with former FBI official Peter Barnes, Sr., who was also in attendance tonight.

Smith acknowledged the occasional “headbutting” at the leadership level, but there looked to be few hard feelings between any in the room tonight, who found common ground over McCabe, the race for governor in 2017, and other recent challenges that likely call for solidarity among the organization’s members. Smith wants a congressman from Middlesex County in the coming years, as well as a seat at the table during ongoing statewide discussions about expanding casino gaming outside a beleaguered Atlantic City.

A constitutional amendment authorizing three casinos to be built in North Jersey was proposed by a trio of lawmakers in Trenton last week, prompting Smith and fellow state Senators Kip Bateman (R-16) and Linda Greenstein (D-14) to introduce their own bill that calls for one in Central Jersey, potentially Middlesex or Somerset County.

McCabe was arguably the darling of the night, the recipient of raucous applause as he tweaked the crowd with jokes and motivational rhetoric about enhancing voter targeting and outreach technologies at the local level. The mood in the room at one point grew solemn when he thanked supporters for standing by him during recent life troubles, saying he “didn’t know if” he could stand before them eight months ago — though he quickly returned to more uplifting talk.

Still, reminders of what went down here last night couldn’t be ignored. One of the onlookers packed into the standing-room only crowd at the back of the room was Hahn, who will now step up to lead the local party. But while he may have appeared the establishment agitator then, he assumed no such role tonight, telling PolitickerNJ that he’s ready to take McCabe’s lead on all upcoming elections.

That includes, he said, the reelction bids of incumbent Assemblypeople Nancy Pinkin (D-18) and Patrick Diegnan (D-18), state Senator Peter Barnes (D-18), and whoever the county decides to back in a Democratic gubernatorial primary two years from now.

“I’ve been a PBA delegate and president for 10 years, and a lot of the people in this room I’ve known for 20, 25 years. So I don’t think it’s going to be a hard transition,” he said.

“What took place last night in Edison really does speak to the process. It was truly the voice of the people. But he and I are going to sit down, and are committed to continuing the business of electing Democrats in Edison,” he said. 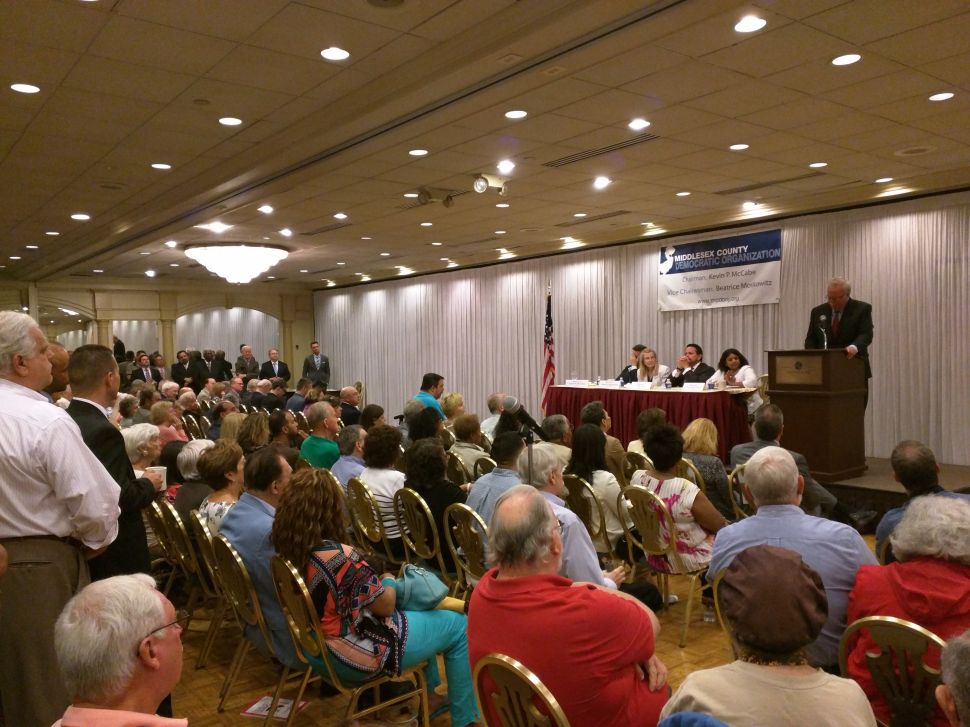