I entered the Drawing Center’s dark main gallery on Monday afternoon, when it’s normally closed to visitors. Ryan and Trevor Oakes—brothers, artist and collaborators—were the only ones inside, along with a female model, dressed only from the waist down, lit softly with a standing light. They were in the middle of a live drawing session using a one-of-a-kind drawing machine they’ve built from scratch. Not like, the spirograph of your childhood, but one capable of capturing detail generally not visible to the naked eye.

The artists are currently in residence at the Drawing Center in Soho where they’ve been doing portraits of visitors with their machine since May. The twins, both graduates of Cooper Union, are collaborators and artists who have devised a method that reflects with immaculate precision a panoramic vision of the entire human eye. They switch off with drawing duties, though Trevor is stationed at the easel most often, while Ryan answers questions from visitors, and directs and positions the models.

Their residency is in conjunction with the exhibition “Portraits from the École des Beaux-Arts Paris,” a loan exhibition of drawings from live models. “We’ve been taking cues from the portraits in the show,” Ryan told me, as Trevor continued sketching.

The show brings together 40 portraits from the École des Beaux-Arts’ collections spanning 400 years, and rotated weekly. The Twins were invited by the Drawing Center to complete a work in-residence because of their unique method of live drawing. They have had back-to-back appointments since they started their residency, even on the Center’s days off, and Monday was no exception, though their model was the first nude participant they’ve had so far.

The “concave easel” they’ve built is based on a scientific phenomenon of doubling that occurs when the eye is distinguishing between objects in the foreground and background of any environment. To explain this, Ryan asks me prior to our drawing session to hold a pen in front of my face and look past it at the portraits on the wall.

“Do you see two pens?” he asked. I stare at two pens, one slightly translucent and lower than the other. He explains that this doubling is an omnipresent occurrence at all times as the eyes try to focus, though it’s hardly noticeable unless you’re paying close attention.

Their machine, which weighs about 40 pounds, allows the artists to draw the finite details of a scene by tracing the doubled object onto paper. It has a rounded drawing surface—a woven metal grid—which measures about 13 inches across. A brace holds the head in place, close to the surface of the paper, from which the eyes are best positioned to trace on a one-to-one scale the detail of any area in sight.

So far, they’ve drawn views of the Getty’s gardens, Anish Kapoor’s reflective Bean in Millennium Park, and the Flatiron Building. This is the first time they’re using the easel to draw portraits, and the results are eclectic, colorful, and will be part of a three-dimensional diorama-style drawing of the exhibition and its visitors.

When my turn comes up, I’m positioned about 20-feet from Trevor at the easel. It doesn’t matter where you stand in the room, as long as your distance from the easel is recorded. The twins will use that measurement to place your portrait within their finished drawing of the room. Think of a crowd of paper dolls standing against a backdrop of the Drawing Center’s main gallery.

I’m drawn to the portraits where sitters have turned their heads ever so slightly, and so I strike a three-quarter pose, and try not to stand too stiffly, thinking of one of Degas’ ballet dancers. My 20-minutes passes quickly, and Ryan chats with me the whole time, recounting some of the more creative methods they’ve used during their outdoor drawing sessions. For instance, while recording the pattern of the tiles around the Bean, Ryan used an umbrella to mark tiles in the distance.

Only twice in my session am I prompted by Trevor, behind the paper; once to fix my gaze so he can draw my eyes, and then again to shift the weight in my legs. Most of the portraits they’ve completed have been in black-and-white Conté crayon, but as they’ve progressed, splashes of color have made it in, and they’ve expanded their materials to include colored paper, nodding to some of the drawings on view. Some figures are seated, most are standing, and a few have brought props like books or color-coordinated outfits.

When my time is up, I peek behind Trevor’s shoulder at my portrait. He holds the two-inch version of me against the drawing of the gallery that’s still in progress. When it’s finished, all of the figures will be cut out and mounted to thin sheets of aluminum, and I’ll be standing toward the back, next to a portrait on blue paper.

The Twins’ residency wraps up this week, and they’ll be drawing walk-in visitors, between appointments, through Thursday, June 25. 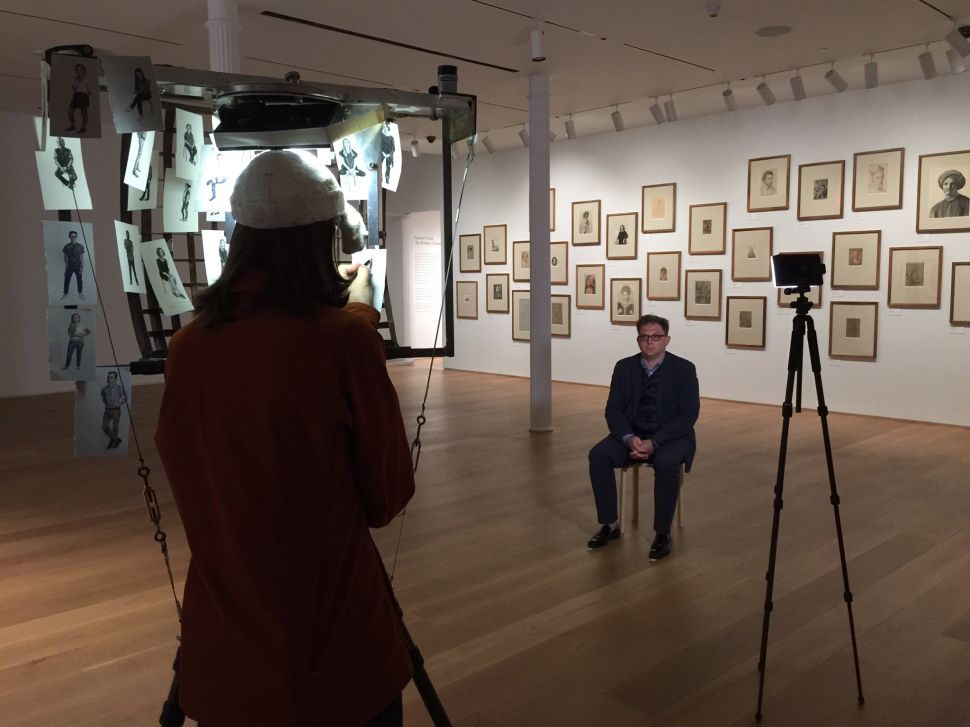