Alexei Ratmansky, ballet’s most intelligent and hardworking choreographer, has spent a great deal of time (and a great deal of ABT’s money) reconstructing Petipa’s most ambitious and influential ballet, The Sleeping Beauty. That is, he’s gone back to the source—to the erratic notations of the original that were spirited out of the then-new Soviet Union—and used all his skills to reproduce what they tell us. The results are fascinating, lovely, and occasionally disconcerting.

What he gives us is a softer, gentler style than we’re used to—closer to Ashton than to Balanchine, who sharpened and glamorized Petipa in Theme and Variations, his 1947 tribute to Beauty. Ratmansky’s extensions are modest and unaggressive—no feet flung upwards until they curl around the ears; legs raised no more than 120 degrees. Steps we’re used to seeing on full pointe may now be on demi-pointe. The men aren’t circling the stage in giant jetés. Tutus are pliant and down to the knee, not bristling out from the body. The mime sequences are strong and clear, their message conveyed through convincing detail. There’s a general sense of glow rather than of brilliance. Dancing this way is a difficult stretch for dancers trained to more bravura presentation, and not everyone looks totally comfortable with it, but the ABT dancers will either take to it or, eventually, slip back into the old ways. Even if they do, though, something will be retained.

In the same way Ratmansky has imposed an older style on the dancing, he has looked backwards for the appearance of the production. Here we have 1890 opulence married to the Bakst designs for the famous 1921 Diaghilev production. Sometimes the results are stunning, sometimes irritating—sorry, gold wigs and extravagant headpieces can look more like Vegas than Petersburg. (Actually, the weird vertical wig worn by the Queen reminded me of Marge Simpson.) The indoor set for the Prologue, all elegant grays and darkly marbled columns, is impressive and handsome, the perfect backdrop for the mass of courtiers gathered for Aurora’s christening and the Fairies’ variations. The dark outdoor set for Act One is so restrictive and uninviting that the Garland Dance (in garish orange and turquoise) looks cramped and confused, and Aurora’s first entrance, down a poorly situated staircase, has no charm and no resonance. The Hunt scene and the Vision scene are pleasantly pictorial. The massively populated final act, with a cornucopia of traditional fairytale creatures on hand for Aurora’s wedding, is also handsomely dressed and accoutered.

The level of dancing throughout is remarkably high, and Beauty gives many, many young dancers solo or demi-solo opportunities—the Fairies, the Jewels, the snippets of Cinderella, Red Riding Hood, et al. provide what will be an incomparable training ground for the company. Ratmansky has clearly coached his dancers relentlessly, giving each of them a personality yet projecting a harmony of style. (I was particularly impressed by April Giangeruso as the fairy Violente and Lauren Post as the Breadcrumb fairy.) Both Craig Salstein and Nancy Raffa were spectacular as the wicked Carabosse (and so were her rat attendants)—this was the finest dancing I’ve seen from Salstein. (Too bad that in the Hunt scene he pushed his doddery old tutor over the edge into shtick.) As the Lilac Fairy—so crucial to the ballet—both Stella Abrera and Devon Teuscher were pleasing and apt, but neither had the peculiar (and rare) combination of grace and command the role requires. In their defense I have to point out that Ratmansky hasn’t given Lilac an appropriate exit at the end of Act One—she triggers the action, and then she just wanders upstage amidst a milling corps of dancers and disappears. We want to see her dominant and triumphant as she observes the court falling into its century-long sleep. This is a strange misstep on the part of a choreographer who has so fine a talent for storytelling.

My other quarrel with Ratmansky’s narrative choices is the absence of the panorama that leads to the Awakening. Prince Désiré steps into Lilac’s boat, there’s a little blurred activity behind a scrim, and he’s walking straight into Aurora’s bedroom. Which means that some of Tchaikovsky’s greatest music is lost. And by eliminating the Prince’s struggle to reach Aurora, Ratmansky further reenforces his focus on detail and style rather than on the ballet’s projection of the great conflict between good and evil which is its underlying theme. The marriage in the final scene is reduced to a conventional fairytale wedding, with none of the transcendent implications of resolution and healing that the music evokes. This Beauty, for all its complexity of detail and large-scale pictorial splendor—its endless dance felicities—is essentially small-scale in its ambitions.

As for the principal dancers, the first cast presented Gillian Murphy as Aurora and Marcelo Gomes as the Prince (though the Prince hasn’t got much to do until the final pas de deux). Murphy is a paragon of dance classicism, but at the premiere she seemed uncharacteristically nervous, even flubbing a moment in the famous (for its terrors) “Rose Adagio.” For me, she didn’t project the joyous youthful radiance we expect from Aurora as she celebrates her 16th birthday. But then I was branded forever by Margot Fonteyn. Murphy regained her customary authority in the last act formal pas de deux.

Sarah Lane, at the second performance, did project Aurora’s youth and charm and danced throughout with delicacy and musicality, but she lacks the grandeur the ending requires. (Murphy smoothly pulled off the audience-pleasing fish dives in that final pas de deux, whereas Lane didn’t attempt them—perhaps at Ratmansky’s direction.) As the Prince, that glorious dancer Herman Cornejo was badly hampered by his costume and elaborate hat, which more or less devoured him, and he was made to look even shorter than he actually is by being paired in the Hunt scene with a Countess almost a head taller than he is. No wonder he was thrilled to discover the far-from-tall Lane in the Vision scene!

So there are flaws in this historically fascinating Beauty. (I hope Ratmansky some day will give us his own ideas about the ballet, rather than recreate its past.) The flaws don’t ultimately detract from so generally satisfying an accomplishment. This may be 1890’s Sleeping Beauty rather than ours, but it’s one to cherish. 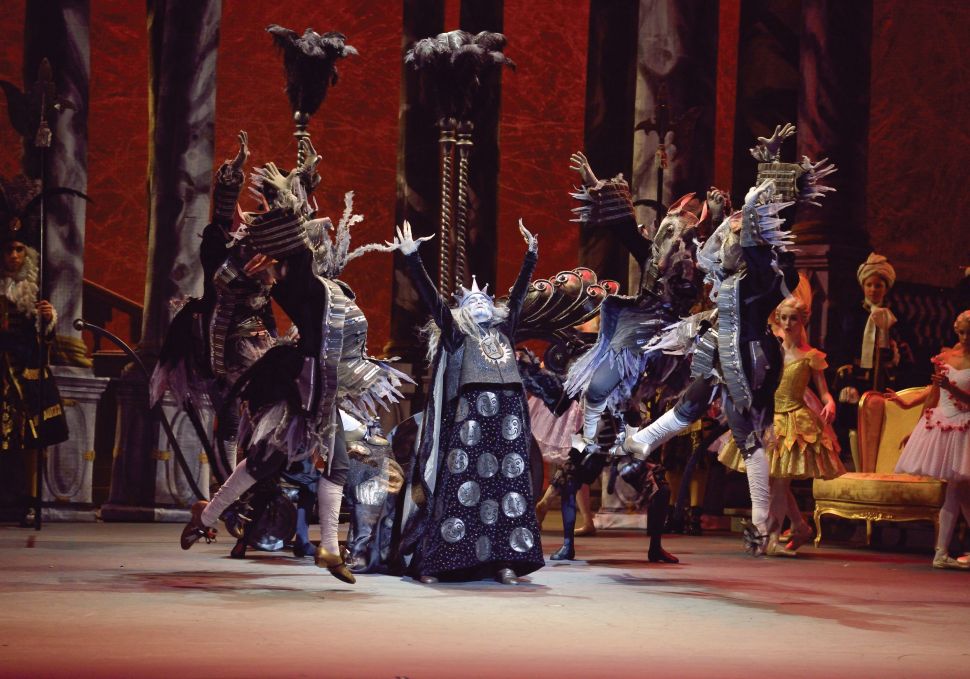