The Democrats today face a big wave; probably not as big as the Elvis wave or the Woodstock wave but a pretty big wave and one which is perhaps prelude to a Great Wave ahead: A new approach, a new sequence of events which could constellate the rising generation to its own force; the presumed slackers and sleepy heads of the so-called Millennial generation, to a singular effect.

Maybe it will be the anti-Millennials and take a few more years, those born free within the new millennium who will carry us the next 60 or so years as the Trans-Pacific Partnership (TPP) vote last week in Congress brings a historic paradigm shift, oddly enough not in trade, but in the alignment of the Democratic party’s order and power structure. It appears this week that finally, the millennium and its prophesied hero generation, the Millennials, could be upon us.

Democratic commentator and scholar Bill Press writes in The Hill that President Obama brought in on himself. How so?

“First,” writes Press, “ he tried to push another dubious trade deal on a group of Democratic lawmakers who still regretted voting for the North American Free Trade Agreement (NAFTA) in 1992 — and who knew that a “yes” vote would earn them the wrath of labor unions, which unanimously opposed the TPP trade deal, yet win them no love from Big Business, which would support their Republican opponents anyway.”

They are – it is – a generation in waiting. And it may well be waiting for Bernie.

The seas shifted this week when the dead center representative Democrat who so effectively stayed the course of Obama’s victory marches this past decade, Congresswoman Nancy Pelosi, flipped on the president and joined the Democratic swell in opposition to the TPP, virtually gutting the president’s chances for a global trade legacy.

“I will be voting to slow down fast-track,” Pelosi said before the vote. “Today we have an opportunity to slow down. Whatever the deal is with other countries, we want a better deal for American workers.”

In itself a historic statement. For when did America, the most aggressively and perhaps blindly and fatally extraverted nation in world history ever vote to slow down?

And write this down as one of history’s ironies. Hillary Clinton, who fiercely advanced TPP all throughout her run as Secretary of State, repudiated it within hours of her announcement to run for President. And she of the obsequious “co-presidency” of Clinton the First which fiercely advanced NAFTA until it passed on January 1, 1994, suddenly supports its antithesis.

Regulars in Washington heard the anthem “leadership and excellence” throughout the Reagan period. Then came the Clintons with “diversity and globalization.” Say goodbye now to globalization at any cost; globalization as America’s birthright. America has found its edges. We’re gonna need some new buzz words.

There is nothing wrong with the TPP per se. In the hands of Jim Webb, former Virginia Senator and Secretary of the Navy under Ronald Reagan, a “Child of Asia” since the Vietnam war, it could be a loving trust of good neighbors; good, mature, relatively new Asian neighbors for America. But for conservatives like Congressman Paul Ryan, a key yell leader for the project, who sees only a rising opportunity for American dominance and dominion, not so good.

Today liberalism may be winning the Millennials to their side, the group said to be essential to the turn and rise of the century.

It does not advance Ryan’s position when his new, young Republican fellow in the Senate, Tom Cotton of Arkansas, a Tea Party favorite who represents the rising conservative generation, voted last month to give the president fast-track authority to “ensure that the president’s trade negotiations occur in a transparent manner.” We may be suspicious of a secret agenda as in his maiden speech to Congress this March Cotton called for America’s “global military dominance.”

Such candor brings credibility to outlander dissident Gerald Celente of Trends Journal, whose dark prophecy offered an explanation of why the world ignored America and followed Britain instead to the new Asian Infrastructure Investment Bank (AIIB): “The business of China is business,” said Celente. “The business of America is war.”

But just as the AIIB may have triggered mature and seasoned states to abruptly leave America’s side, the TPP defectors in Congress likewise bring an American sea change internally.

America awakens again to the old school socialist temperament of Bernie Sanders. As Ron Paul was to new thinking on the libertarian right a few years back, Sanders is the left’s new “wise old man”; the Gray Champion who stands in the road and calls, “No more!” And it’s La Passionara, spirit of potentially revolutionary times, can be found in Massachusetts Senator Elizabeth Warren, who first raised the charge against TPP. The fire of pending revolution was in her eyes all along, even when she first appeared to the world as an academic critic of Wall Street on the Neil Cavuto show.

Today liberalism may be winning the Millennials to their side, the group said to be essential to the turn and rise of the century. Bernie is everywhere on the Millennials indigenous means of communication; Facebook and Twitter.

I have four Millennials back and forth in my house, several of whom were interviewed by “Politico” a few years back as representative of the generational tribe. They are not slackers or sleepy heads; they are bright, disciplined and acutely focused. Ask almost any in this group and they all say the same thing: Bernie talks straight.

They are – it is – a generation in waiting. And it may well be waiting for Bernie. 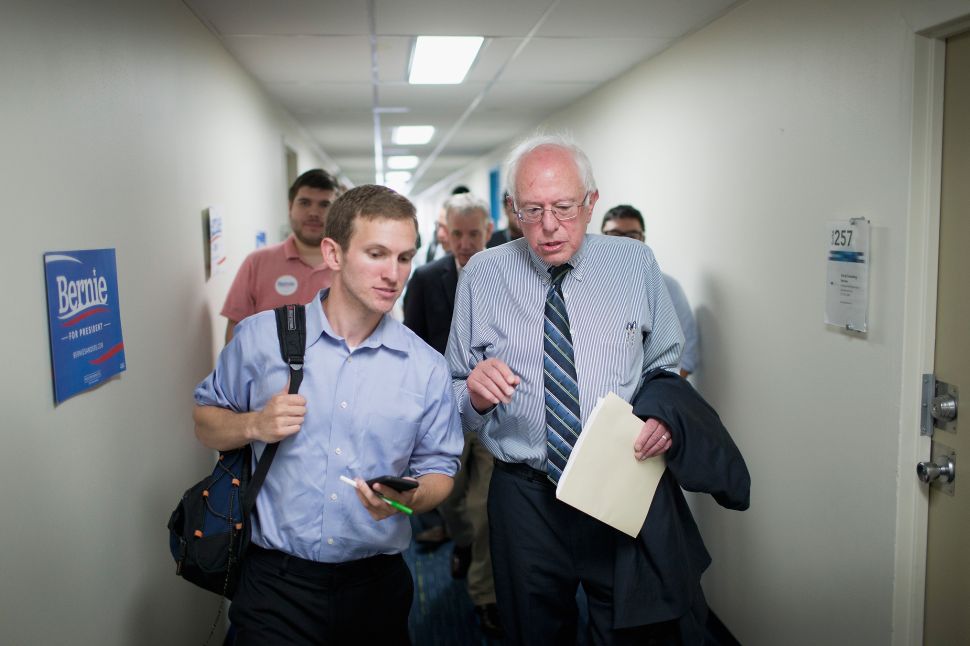