When the Democratic candidates for president gather for their first debate and discuss how to reduce income inequality and create an economic tide that lifts all American boats, and the pollsters ask registered Democrats who was the big winner, the winners will probably be:

Bernie Sanders, and the Democrats.

When the Republican candidates gather for their first debate and the mob scene of GOP contestants, which will be larger than the starting lineup of the New York Yankees, battles to determine which liberals they hate the most and what new wars they want to fight, the big winner will be:

The great majority of Democrats who will choose the Democratic nominee are liberals. Because literary and cultural metaphors are more interesting than political jargon, I propose that Bernie Sanders is the Frank Sinatra of American progressivism. His music of progressivism is perfectly pitched, his lyrics of liberalism are beautifully written, and his standing has risen to make him the second leading candidate for the Democratic nomination.

For this reason when Democrats are asked in polls about who won the debates, they will register their aspirations by praising the Senator from Vermont who most recently called for every American to have the opportunity for a free college education to equalize the scales of opportunity in America.

What a noble vision that is!

When patriotic Americans donate a little bit of their hard-earned money to the Bernie Sanders for president campaign, the only motivation for their donation and the practical result of their contribution will be to empower the megaphone for the values they believe in and the causes they cherish.

Mr. Sanders is not alone in the pantheon of progressive heroes in our politics today.

When I first began to call for a movement to draft Elizabeth Warren to run for the Senate seat once held by the incomparable Edward Kennedy, I suggested that if elected she would become the conscience of the Senate. And so she has. Hillary Clinton can fairly be called a role model for women around the world, and when she recently praised Ms. Warren in a national magazine, her praise was so extravagant that in some important ways she might consider the progressivism of Elizabeth Warren to be a role model for herself.

In New York Mayor Bill de Blasio carries the progressive banner performing what an earlier mayor, the late and great John V. Lindsay (who was elected as a Repubican but became a quite progressive Democrat), once called “the second toughest job in America.” Senators and Congressmen in dysfunctional Washington can preach what they want, but Bill de Blasio brings progressive government every hour of every day to the city that never sleeps.

Former Senator Russ Feingold has announced his campaign to stage a comeback to reclaim his seat in the Senate from Wisconsin, a state with a historic place in the pantheon of American progressivism.

Mr. Feingold is a leader of profound integrity, conviction, and principle. His return to the Senate would be a magnificent moment for the progressive cause, especially if he casts the tie-breaking vote to return the Senate to Democratic control.

There are other stars in the progressive firmament on a list too long to fully detail here. But to expand our metaphor for today Bernie Sanders, Elizabeth Warren, Bill de Blasio and Russ Feingold are like the Beatles of the American progressive movement today presenting a kaleidoscopic album of visions, policies, inspirations and dreams of Americans who want to revive the spirit of progressive Democratic icons with names such as Roosevelt and Kennedy.

I am a progressive populist who supports the dream of Hillary Clinton to become the first woman president and name new Supreme Court justices who would reverse the injustices that have become all too common from the five conservative men who often comprise the majority of the court today.

Ms. Clinton agrees with most of the policies of the progressive champions I praise here. What is good for them is good for her, for Democrats and for America. The high ideals of the men and women who join the movements to draft Elizabeth Warren and elect Bernie Sanders are expressing the highest ideal of American patriotism.

Not one of them supports the candidate they believe in to obtain a fancy White House office, donate enough money to be named ambassador to France, or make their financial fortune by striding through the revolving door to lobby for the interests of multinational banks or big oil companies. They do what they do to make America better, to make the world more just, and to make life more fair, which puts them in the upper strata of patriotism alongside those who risk their lives to serve our country in uniform or feed the hungry in soup kitchens.

There is a convergence among the Democratic candidates around views that would make America a more fair and prosperous nation.

When voters compare the mob scene of Republican debates, which will look like a Woodstock of the extreme right wing, versus Democratic debates that will be a contest of ideas to bring more fairness and prosperity to America, it will disprove the falsehood propagated by the right and casually repeated by some lazy commentators in the media that Democrats have a problem of “moving to the left.”

From Bernie Sanders to Hillary Clinton and all of the Democratic candidates for president, they are championing variations of a theme of economic and social justice and betterment that reflects the aspirations of a majority of American voters.

The most popular public figure in America—and the world—is Pope Francis, who teaches bold and sweeping truths about the need for dramatic reform of the world economy, income equality, humane immigration policies, strong action to save the world from global warming, and generosity and love toward the destitute and poor.

According to a recent CBS/New York Times poll, between 60 percent and 70 percent of Americans believe income inequality must be urgently addressed, the minimum wage should be increased to above $10 an hour, corporate special interests have too much influence over government, taxes should be reasonably raised for Americans with income over $1 million a year, business should offer paid parental and sick leave, women should receive pay that is equal to men, and Supreme Court decisions that allow those with the most money to buy elections are a travesty that should be reversed.

The intellectual pacesetters in these debates are Bernie Sanders, who to quote Blue Eyes will do it his way, and Elizabeth Warren, Bill de Blasio and Russ Feingold.

If Hillary Clinton, who champions these causes in her own way, is nominated, the enthusiasm and excitement generated by Bernie Sanders and the other progressives will ultimately help her by motivating more voters to give money and come out to vote, and by appealing to the majority of voters who share these values.

I expect Bernie Sanders, the pure play of the progressive vision, to shine in the upcoming debates.

When voters compare the mob scene of Republican debates, in which GOP candidates compete to tell the nation which liberals they hate the most, and Democratic debates, in which candidates compete to tell the nation how they will lift the economic lives of our people, the big winner will be the party of Sanders, Warren, de Blasio, Feingold, Roosevelt, Truman, Kennedy and Clinton. 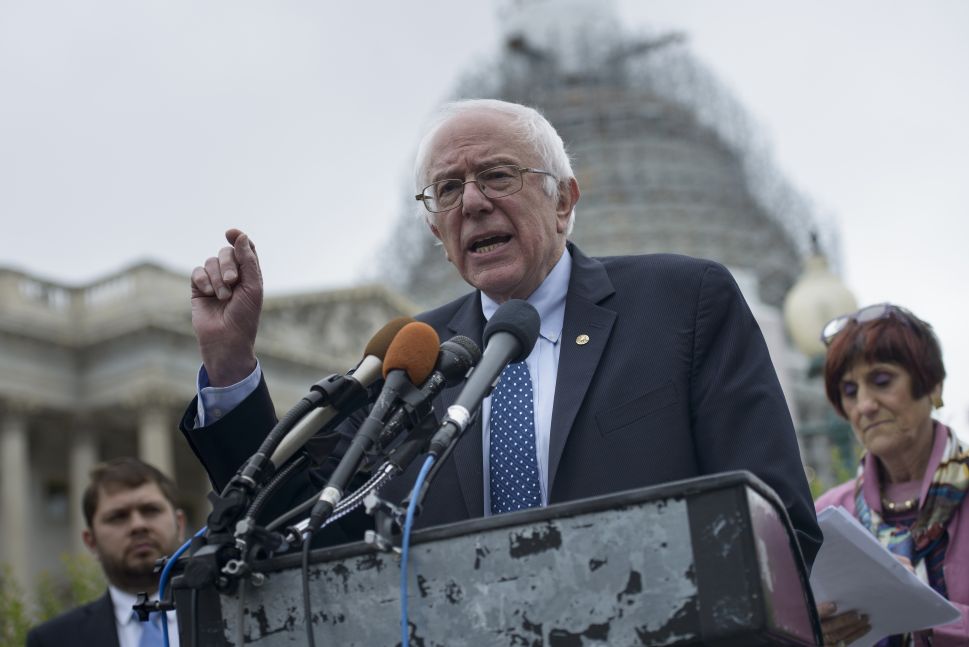