Let me be the first commentator to state explicitly what many Democratic insiders fear and many of the most progressive activists in the party yearn for: There is a very real prospect that Senator Bernie Sanders wins an outright victory in the Iowa caucus and pulls off one of the most stunning upsets in modern political history.

At this moment I would put the odds that Mr. Sanders upsets Hillary Clinton in the Iowa caucus at nearly 40 percent. As someone who can fairly be called a Democratic insider myself, I can report that some of the smartest Democratic strategists in national politics privately believe this but will not publicly state it. I just did.

To fully understand the powerful forces at work within the Democratic Party and national politics, and why Bernie Sanders has suddenly vaulted to a clear second place in the race for the Democratic nomination, lets briefly consider political events in the three days that began last Friday and ended on Sunday.

First, on Friday, President Obama was rebuked by Democrats in the House of Representatives over the fast track trade legislation which led—at least for now—to the bill being defeated in the House.

Then, on Saturday, Hillary Clinton made a major speech in New York in which she echoed many of the themes of progressive populist Democrats while appearing to wrap herself around the political mantle of President Obama with language so compelling it gave credence to the Republican charge that she is running for the third Obama term. I would emphasize—and this is important—that while Clinton was embracing Obama, progressives remember that not long ago Obama was personally and politically insulting prominent progressives such as Sen. Elizabeth Warren (D-Mass.), which I have previously written about in the Observer.

Next, on Sunday, Mr. Sanders and Ms. Clinton were both campaigning in Iowa, where he again aggressively opposed the trade bill and she implied that she would be a stronger trade negotiator than the president but again took no position on the trade bill.

Bernie Sanders took a position of conviction and purpose opposing the trade bill, while Hillary Clinton took a position that the Washington Post today correctly reported left her “a lot of wiggle room.”

These three days, from Friday through Sunday, are a microcosm of the forces at work within the Democratic Party that began in Washington and arrived in the heart of Iowa during campaigning for the caucus vote by the frontrunner candidate and her closest competitor.

The reason that Bernie Sanders has a viable chance of defeating Clinton in the Iowa caucus is that caucus elections involve a far smaller pool of voters than primary elections. In the caucus variation of “one person, one vote,” the candidate who can best inspire fervent supporters to attend a caucus on a frigid Iowa evening is the candidate who will win. A student at an Iowa college has the same “one vote” as the chair of the Democratic Party of an Iowa county.

Mr. Sanders is the ultimate conviction politician in American politics. He is the epitome of authenticity. You will never see Mr. Sanders give paid speeches to big banks or Wall Street firms. Nor do his supporters dream of making their financial fortunes as highly paid lobbyists for special interests in Washington.

When the evening of the Iowa caucus arrives it is very possible that political experts and insiders will be astonished and confounded by the sudden appearance of new caucus participants who have never attended party meetings or caucus votes, and trudge through frigid cold and piles of snow to cast their caucus vote for Bernie Sanders.

Politics is similar to the concept of alternative universes in theoretical physics. Most political reporting in major media comes out of the universe of political insiders, where insider reporters report what they hear from insider politicians.

There is an alternate universe to this, which I would call “The Real America,” which is often missed by political insiders, which is why pundits are so often wrong.

In this alternate universe of real Americans who are suspicious of political insiders, there are people with passions and principles who are occasionally inspired to participate in politics in ways that are missed by the mainstream media until a shocking event unfolds in real time.

It is very possible that such an event could occur in the Iowa caucus in 2016, when Mr. Sanders inspires a wave of participation from highly motivated and idealistic outsiders who suddenly descend on the caucuses and carry him to a victory that will shock and stun the political establishment and political media.

This column will cause great consternation among my friends in the Clinton campaign, but I would argue that the surge Mr. Sanders could ultimately prove a blessing in disguise for Hillary Clinton. The Sanders challenge will make her a stronger and better candidate and if she is nominated, Mr. Sanders could be a kingmaker if not a king by rallying his troops to vote for Ms. Clinton or any nominee, which he surely will for whomever is nominated.

I believe it is profoundly helpful, for Democrats and for America, that Mr. Sanders is bringing his integrity, passion, sincerity and progressive principles to center stage in the presidential campaign. It is good for Democrats and for America that new people are being inspired to join the political process which can only revitalize our democracy.

In the meantime, do not be surprised if the Iowa caucus in 2016 brings an earthquake to American politics and Bernie Sanders wins one of the great upset victories in modern times.

Brent Budowsky formerly served as policy aide to Sen. Lloyd Bentsen (D-Tex) and Legislative Director to Rep. Bill Alexander D-Ark.), then Chief Deputy Majority Whip. He holds a law degree from Catholic University, and an LL.M. degree from the London School of Economics and writes a weekly column for The Hill. Email him at brentbbi@webtv.net 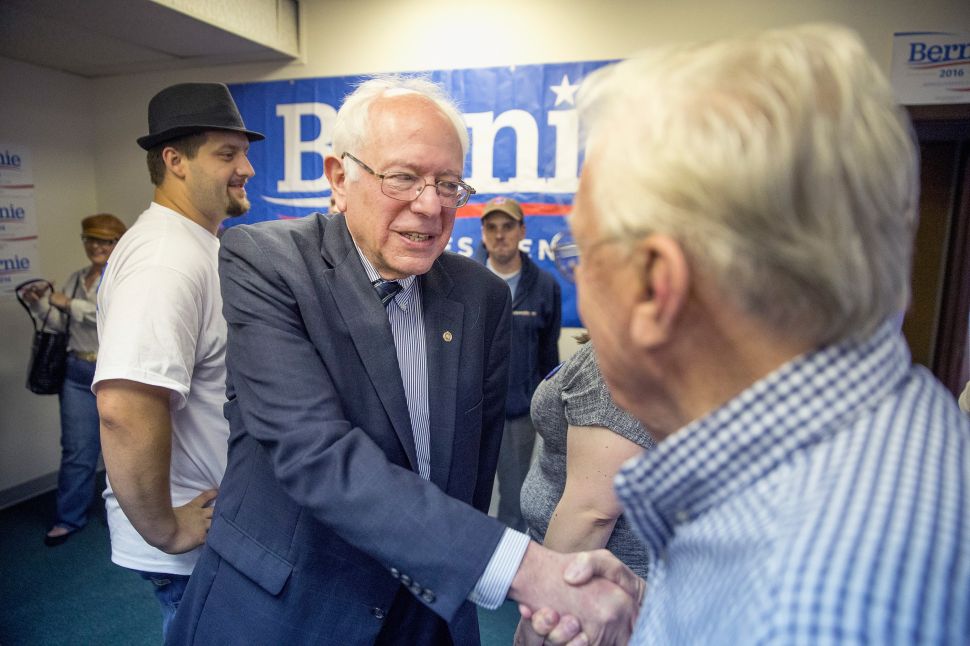