Some people will tell you that the first day of summer is Memorial Day—there’s a valid argument for that. The pools open, it’s hot out (depending on where you live), and the BBQ gets fired up for the first time. The more pedantic among us will claim it doesn’t start until the Summer Solstice in late June but they’re just showing off. For me, summer starts on whatever night Big Brother premieres. That would be last night. Big Brother is the summer to me. It is not a television show—it is a lifestyle.

Any time I go on vacation with my friends, or family, or anyone I am secretly playing Big Brother against all of them. It is about making alliances. It is about the art of misdirection. It is about winning the house over while secretly making strides toward your own agenda. It is about not getting voted out first. Yes, my trips are super-intense–nobody cooks you breakfast for an innocent reason. But that is what it means to be a Big Brother fan.

Premiere night is a ritual at this point. There is much prep involved. I need to re-follow the Big Brother Leak accounts. These sites live-tweet the live feeds that run most of the day (and night) inside the house. A lot of the time it is just people napping or smoking cigarettes or working out. Sometimes it is back room plotting. Other times it is good old-fashioned drama. If you’ve never watched six hours of overnight live feeds when you have to be at work the next morning, you’re not me.

Then, I need to re-follow my favorite former houseguests. What does Janelle think of the season? What about Ian? How active a champ is Derek going to be? These are all important parts of the viewing experience. Because the world of Big Brother is it’s own functioning ecosystem. There is an entire economy based off current and former Big Brother contestants. Podcasts, web shows, appearances, this is how people earn their livelihoods.

After all that, I need to watch the first houseguest profile interviews they put up on the website so I can stake a claim to my early favorites. Much like game play, you can’t commit to anyone too early. There is no way to know who has a chance. A houseguest is too strong, too handsome, gets along with everyone too well on the first night, they paint a big target on their back and could be gone before the first twist even occurs. Throwing too much support out from the jump is season suicide. One bad call and you’re the fool who thought Devin had a really good shot at winning season 16 before he imploded in one of the most entertaining weeks in Big Brother history. This is about strategy, you have to be Lord Baelish Littlefinger to successfully watch this show with my friends.

This is all the prep work that must be done before Julie Chen even steps on her stage. It’s been a long time coming but here we are.

There are new parts added to house—a bridge on the second floor that is see-through so no dressed up there for the ladies! There are new players, and of course, more twists. Julie mentioned whoever wins this season will be in the house for 98 days. No contact with the outside world, no way to talk to loved ones. Only the people in the house and the paranoia that comes from playing a game such as this. Since this is a two-night premiere we only met eight of the sixteen new houseguests. Let’s run through them:

James (Sumter, South Carolina): James refers to himself as “Asian and country.” He wears camo shorts, loves to shoot skeet, hunt, and fish. He was adopted and people are usually taken aback by his heavy Southern accent. He’s there to “win the dang money.” He has a three year old kid.

Jace (Venice, California): Jace idolized Indiana Jones and has the hat to prove it. He’s an adventurer who likes to skateboard and stuff. He kind of looks like Hayden from last season because of his long hair and he makes a joke about being a pedicab driver during their intro toasts.

Audrey (Villa Rica, Georgia): Digital Media Consultant who calls herself a true girly-girl. Audrey is the first transgender contestant on the show. They tease this out a little bit saying that she has a truth to share. It’s done really nicely during the champagne toast. Everyone is super supportive and even though a couple of houseguests are taken by surprise, all of the responses are respectful.

Austin (Woodland Hills, California): Austin is a pro-wrestler who was recruited by the WWE for their NXT division but he got hurt. He is a gigantic, 6’5” guy who wrestled under the name Judas and wears a top hat when he is going to lie. He also wears black turtlenecks and has a Masters in Medieval Romantic Lit. And he has tree tattoos like Clancy Brown in Carnivale. His strategy is to play up all of his former injuries even though he is completely healed. He looks like Joe Manganiello and Justin Theroux cloned into played CM Punk.

Da’Vonne (Inglewood, California): Da’Vonne is a poker dealer and a single mom of a seven month old. She’s there to win the money for her daughter, Cadence. She wants to be underestimated as “some chick from the hood” and she’s not telling anyone she’s a poker dealer because it would tip them off that she knows how to bluff which is the same thing as lying. She says she’s a second-grade teacher.

Clay (Dickinson, Texas): Clay is the heartthrob cowboy. He mentions no less than eight times that he played football for Texas A&M. He actually starts off most of his sentences with “I just finished playing ball for Texas A&M, of course I’m going to…” He doesn’t want anyone to know he played for Texas A&M so he doesn’t tell them about it which makes it more impressive how many times he says it in the ep because it’s only in his interviews. I can’t ever root for anyone who wears a cowboy hat in their Big Brother profile pic. Clay thinks Shelli is pretty (see below).

Shelli (Atlanta, Georgia): Shelli is newly divorced and ready to mingle. She is a home-stager and has demo’d house before so she’s not afraid to get her hands dirty. She also has a twin brother. Shelli thinks that Clay is handsome. They discover they both have heart murmurs which means they are probably soul mates.

While everyone is getting to know each other, Da’Vonne, Shelli, and Audrey privately speak about an alliance. The “all-woman” alliance is a tricky one in Big Brother history. It seems to be a taboo thing even though there are always all-guy alliances. It’s also very dangerous to get involved in something on Day 1. Usually, this comes back around in a negative way, especially since the rest of the houseguests aren’t even in there yet. Hilariously, while the women talk about strategy, Austin, Jace, and Clay are planning out their workout schedule and complaining about how many cookies they have eaten.

Clay asks Audrey how her family reacted to her transitioning. Her parents are very conservative and got some bad advice on how to deal with it at first, so they sent Audrey to a troubled youth program that took her into the woods with a bunch of kids with serious substance addictions. Her parents realized they made a mistake and now they accept her and have her back. Da’Vonne believes Audrey is adding a little “salt and pepper” to the story for sympathy but thinks it’s the best thing for their alliance if she can draw everyone in so she gives up a great “Yessssss, girl” in her interview.

Julie reveals the twists to the houseguests. The Battle of the Block is back. Each week there will be two Head of Households, each responsible for nominating two houseguests (four total). Those two teams of two will compete to get off the block. The winning team is safe from the elimination vote and the HOH that nominated them is dethroned. Under these rules, it is possible that someone could be Head of Household and still be the one voted out. It was a solid twist last season so we’ll see how it plays out this year.

The second twist is something new called BB Takeover. The explanation of that is a little foggy but it sounds like there is a possibility for a new twist every week. There’s a hard drum solo that will play when one of these is announced. The first one will be on Sunday’s episode.

The third twist, which is a secret from the houseguests is the Twin Twist. One of the houseguests has a twin (we don’t know who yet) and they will be swapped in and out at different times but playing as one person. If they remain undiscovered and don’t get voted off for the first five weeks, both of them will be eligible to play for the rest of the season as themselves. They did a similar twin twist in Big Brother season 5 with Adria and Natalie. The reveal was one of the best moments of all-time. Any bomb dropped on the houseguests is always a good one so we’ll see how this plays out.

They held the first Head of Household competition, called Flying Tomatoes. Everyone had to balance on a board while tomato-looking balls where shot at them. They had to catch ten of these and put them in a container. A couple of times people slipped off but were able to catch themselves on the container and pull back up onto the platform before their feet touched the ground. Except when Austin tried that, he’s so big he ripped it off the wall. Top competition moment so far. Everyone was shocked that James was doing so well and the conspiracy theories about him not being who he seems started up—the same thing that happened to Donnie last season. It ended up with the last four people all falling off at the same time: Jace, Shelli, Audrey, and James. They had to go to the replay and James was the last person to hit the ground, prob def because he has the shortest legs of everyone still in it. But that doesn’t matter because he is the first Head of Household.

Tomorrow the rest of the guests arrive and I’m so excited to meet them! Sunday is the first nomination ceremony and the first Battle of the Block. Summer is here. It is already heating up. Time to get your game on. 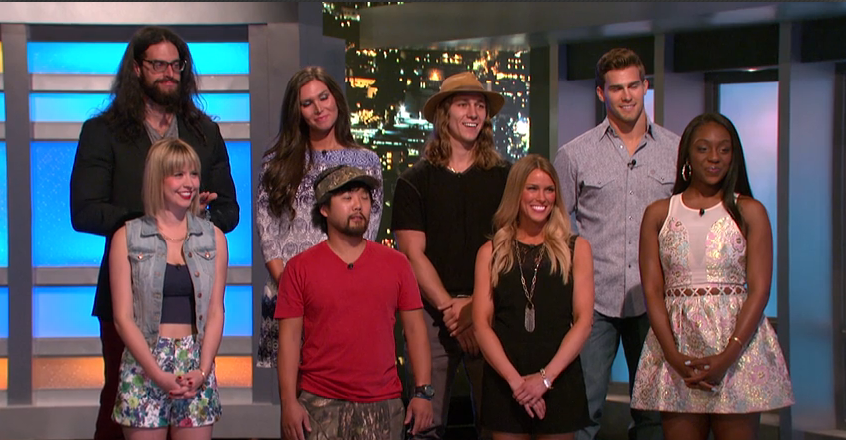