Many people dread taking their kids on a short trip and the mere thought of a long journey paralyzes them. Not Bruce Kirkby and Christine Pitkanen. They decided to take their two young boys, Bodi, 7, and Taj, 3, on an epic 13,000-mile adventure from British Columbia to Karsha Gompa, a secluded cliff-side monastery in Ladakh, India. And, just to add some more excitement to this trip, the family decided to do this without taking a single flight. Yep, that’s right no air travel at all.

The Travel Channel show Big Crazy Family Adventure follows the Kirkby family throughout the 96-day trip as the foursome experiences a few Wonders of the World, expansive landscapes, challenging climates and unique communities in some of the most remote areas of the northern hemisphere.

Bruce and Christine had traveled extensively before they had kids and continued to do so after both their sons came along, taking Bodi to Europe and Patagonia and Taj to the Republic of Georgia.

When they started contemplating this trip, Bruce says that he and Christine figured it was now or never. “We just looked at each other and kind of figured if we don’t do it now, you know, when’s there going to be a better time,” admits Bruce.

Taking such an ambitious trip with kids certainly led to some unforeseen issues, but the family was able to take it all in stride by using some techniques that seem rather rudimentary, if you really think about it. “In a very general sense the challenge is always just getting adequate food and sleep. That was one of our top priorities but, it’s just like that at home,” says Christine. As for the more specific challenges, Christine says that spicy food and heat were the main problems for the kids. “Our little guy was only three and it was really hard when that was the only food they were offering. I would make sure I hit a grocery store and tried to have a few little snacks or try to get my hands on some bread or just plain rice; something that he could eat that wasn’t spicy.” As for the climbing temperature, Christine relates, “Sometimes it was just crippling, up to 110 during the day, so we just had to make sure the kids were really hydrated, that we got them into air-conditioning when we could, and that we weren’t out at the heat of the day if possible.”

Eldest son Bodi is on the autism spectrum and as such has unique individual needs as well. “He needs some down time each day. So that’s one of the things we really had to work in,” says Christine. “So each day we made sure he had just some quiet time on his own because that’s really important for him.”

While we all know that kids have meltdowns, Bruce and Christine admit to being close to having their own collapses from time to time. Christine tells of one such instance. “We had the worst boat ride at one point. It was so hot and we had to sleep down under where the diesel engine was running. It was unbearable and I was like, ‘what are we doing?’ The kids are crying, they were upset, they couldn’t sleep, and they were smelling diesel fumes. It was just awful. Most of the trip was awesome but I definitely had a few times when I was like, ‘I need this part to be over.’”

Safety was really never an issue for the family, says Bruce, but they were concerned when it came to something that might seem a bit unusual – traffic. “Really, traffic anywhere in the world can be unnerving. The one time that I really found myself constantly on high alert was walking through these back alleys that were really narrow and were full of people zipping around on mopeds. To me that was actually one of the scariest things.”

Agreeing with Bruce, Christine jumped in with, “Oh, yes, now that you bring that up I definitely remember driving through Nepal on some of those mountain roads with overhanging cliffs and the driver was zipping around taking the corners really wide and stuff like that. I would say that that was the most unsafe I felt.”

To keep moving comfortably, bringing just the right amount of stuff without overdoing it was imperative. “It’s always hard to pack for any trip, but the more you have just makes everything more difficult,” admits Bruce. “So we brought hot and cold clothing, some books and drawing stuff for the kids and of course some first aid items. And wipes. Wipes for sure.” Christine added that the kids were allowed to bring a few things as well. “We always let our boys bring their special ‘stuffy’ so it’s kind of like bringing a piece of home with them, and a pencil case full of whatever toys they could fit in that pencil case.”

Questioned about bringing any electronic devices, Christine admits that the couple did purchase an iPad for the trip. “We would obviously limit the time the kids spent with it, but if we had like a 12 hour drive we would allow them to do some screen time. We loaded educational programs on it, but there was some just plain playing on it as well.”

Obviously accompanying the family on the trip was the film crew capturing the adventure for The Travel Channel. “They were with us the whole time and it did take some getting used to for me and the kids,” says Christine. ‘You’re wearing a microphone with a pack all the time and some days that was challenging for the kids, but for the most part, we were just doing our thing and after awhile you almost forget that they’re there.”

Aside from the packing, the crew and the sometimes uncomfortable situations, the family did find that they made some positive memories along the way. “So many things that happened on the trip that were crazy and unbelievable,” reveals Christine. “Watching my kids see monkeys for the first time. Watching them ride an elephant for the first time. Things like that – just seeing it through their eyes – those were highlights for me.” Bruce adds, “Seeing how the boys were bonding together and becoming buddies. They just weren’t doing that at home and I feel like this trip brought them together in a way that they wouldn’t have come together otherwise.”

The trip offered a once in a lifetime education opportunity for the whole family, says Christine. “We saw so much. The boys saw different cultures, learned about geography, and traveled to countries they’d never heard of before. All of that is just so invaluable. All of this, everything, was definitely worth it.” 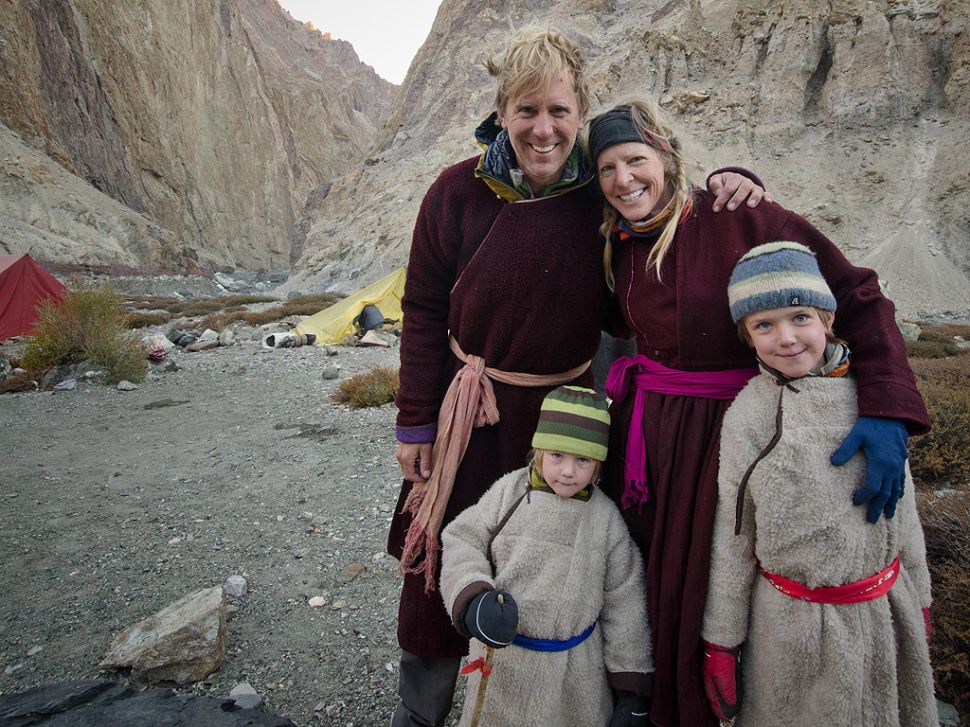