“As a policy matter, we oppose both bills as unprecedented intrusions into the operation and management of the Police Department,” Mr. Bratton said.

But it wasn’t just those two controversial pieces of legislation—which had languished in the Council for months without getting a hearing, only to be heard on a quiet June day after the excitement of the city budget—that Mr. Bratton shot down. He offered opposition to nine separate pieces of legislation from the Council, many of them reporting bills asking the NYPD to provide certain statistics or reports to the Council.

It likely did not come as much of a surprise. Mr. Bratton has long opposed the marquee pieces of legislation being considered at the hearing today.

The chokehold ban, introduced by Councilman Rory Lancman, would seek to make using a chokehold a misdemeanor, rather than simply a violation of the NYPD’s patrol guide. The maneuver is at the center of the death of Eric Garner, a black Staten Island man who died after a white police officer bought him to the ground with an arm around his neck, in a move that Mr. Bratton originally said appeared to be a chokehold. The officer, Daniel Pantaleo, has not been charged with a crime—sparking protests—and the department has not announced what action it will take against him.

“Imposing conditions on daily officer conduct at the operational level, whether on simple law-enforcement interactions or on searches—particularly when those conditions are not otherwise required by state law or operational imperatives—raises new and serious legal and operation questions,” Mr. Bratton said.

Mr. Bratton’s opposition to the proposals—which are also opposed by Mayor Bill de Blasio—comes shortly after the powerful police commissioner noted there “nothing I’ve asked for that I haven’t gotten” after winning 1,300 new officers in the city budget. That the bills are getting a hearing in the typically sleepy summer weeks following the city budget has led some to wonder whether the hearing was simply meant to placate reform groups.

While the commissioner has had a friendlier relationship with this Council than his predecessor, Ray Kelly, enjoyed with the last Council, there were some moments of tension today, particularly around the chokehold bill.

Mr. Lancman asked why officers continue to use chokeholds even despite the department’s prohibition on them, and Mr. Bratton said the department was working to use a more clear definition—lifting it from Mr. Lancman’s bill—and to adjust the language in its rule. But he said there may be “exigent” circumstances when an officer might need to use one, and as such they shouldn’t be illegal.

“I understand your position on the bill and I thought we were doing so well, until at the end when you seemed to allow for the possibility when officers can, in your judgement, use a chokehold,” Mr. Lancman said. “Are you contemplating going back to something like the 1985 standard, where we’re actually weakening the NYPD chokehold ban?”

“We evaluate very closely any use of force by an officer, and one of the things we evaluate is exigent circumstances,” Mr. Bratton said, arguing that if an officer used one to defend another officer’s life, he would take that into consideration.

But Mr. Lancman said that self-defense could still be cited even if the chokehold were made illegal—and is frequently cited by officers and others when they shoot an attacker or otherwise defend themselves.

“The current policy, which is under review and will be revised shortly, prohibits a chokehold there are no exceptions,” Deputy Commissioner Larry Byrne emphasized. “What we found was that the definition of a chokehold for officers and the public needed to be clarified.”

He went on to describe training that goes along with the new definition, but was cut off my Mr. Lancman, who said he was “not interested in the training portion.”

“I’m sorry commissioner,” Mr. Lancman shot back, “I’m the one who asks the questions here.”

Councilman Antonio Reynoso, who has sponsored the Right to Know bills, also expressed frustration at the commissioner’s stance on his legislation.

“This reflects an ongoing national discussion on police and community relations,” Mr. Reynoso said, asking Mr. Bratton to consider “how clear a statement you’re making about legislation and our input, in regards to what we think is an effective means to change police and community relations, is not something that you guys necessarily want to hear.”

Mr. Bratton argued repeatedly that the proposed legislation—including that which would simply ask the department to provide information—was unnecessary.

“A lot of it can be achieved more comprehensively, more willingly, by collaboration rather than by dictate,” Mr. Bratton said.

He said the department is already revising its definition of the chokehold to be more clear—and argued it is not illegal in any other jurisdiction and shouldn’t be here.

“It is the criminalization that you are seeking that I and the mayor have spoken against,” he said.

On the Right to Know Act, Mr. Bratton noted officers are already required to provide their name and information upon request, and can be disciplined by the Civilian Complaint Review Board if they fail to do so when asked. More than one council member noted that officers failing to provide that information seemed to be a common complaint, and that it’s not quite easy to report them if you cannot determine the officer’s name.

The legislation being considered, particularly the chokehold ban and the Right to Know bills, face an uphill battle. In addition to Mr. Bratton’s opposition, Mr. de Blasio is also opposed.

“My position is the same on each of them. You know, as written, I have concerns with all three pieces of legislation, and I think there’s a better way forward,” Mr. de Blasio told reporters today at an unrelated press conference in Brooklyn.
And Council Speaker Melissa Mark-Viverito has yet to take a stance on the legislation, previously expressing reservations about the Right to Know Act.
This story has been updated to correct a quote from Mr. Lancman to Mr. Bratton about who asks questions during a Council hearing. 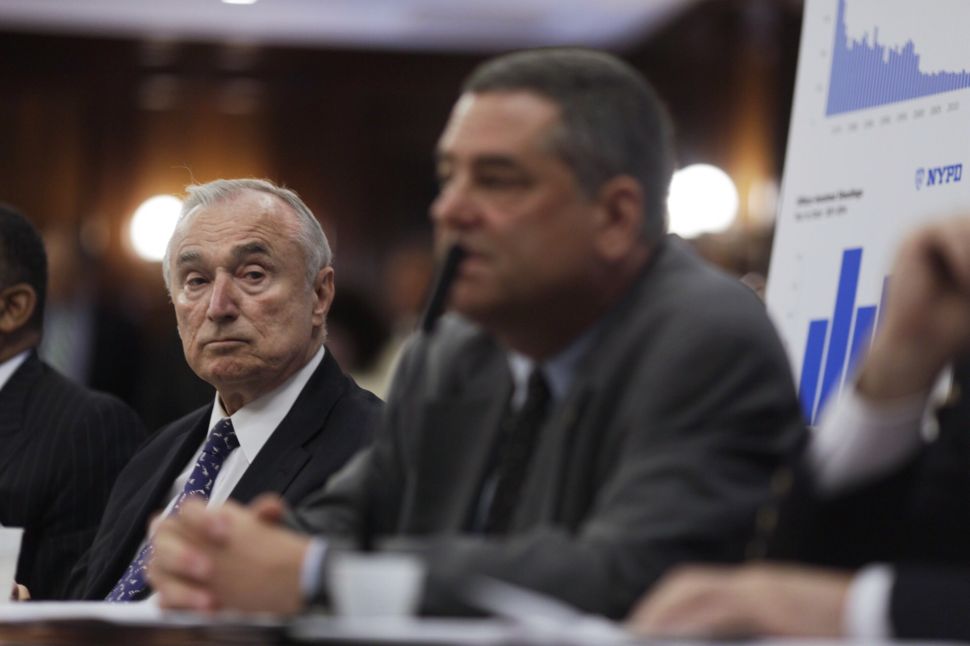