Hoping to apply pressure to uncooperative Republicans in the State Senate, Mayor Bill de Blasio staged a City Hall press conference this afternoon with the city’s top business leaders to demand Albany renews his control of the Department of Education.

“This is an issue that historically has not been a partisan issue,” Mr. de Blasio told reporters. “It’s the only thing we’ve ever seen in the way of education governance that works.”

Mr. de Blasio warned that the “bad old days” of education in New York City would return if Albany allowed his control of the DOE to lapse. “There was dysfunction, there was chaos, there was corruption. Things didn’t move. Everything was about politics and horse-trading,” he said.

The Democrat-dominated Assembly has already passed a three-year extension, leaving it to the the Republican-controlled State Senate to renew Mr. de Blasio’s control of the Department of Education. Republicans recently passed a bill extending mayoral control for a single year while boosting the charter cap and adding Albany oversight to the DOE, a nonstarter for Mr. de Blasio and Democrats–and leaving the mayor begging the GOP not to allow city schools to decentralize next month.

Mayoral control is one of several big ticket items that the State Legislature must address by the end of this month. The renewal of rent and real estate laws, including a controversial real estate tax break, are being fiercely debated. Adding to the uncertainty upstate are a new Senate majority leader and Assembly speaker following the recent indictments of Republican Dean Skelos and Democrat Sheldon Silver.

Mr. de Blasio has been at odds with Gov. Andrew Cuomo, a fellow Democrat, but thanked him today for voicing his support for a three-year extension of mayoral control. The mayor had sought to make it permanent, but accepted a three-year compromise when it became clear that even his allies in Albany weren’t willing to go so far.

Dedicating a single press conference to the issue for the first time, Mr. de Blasio laid out in dire terms what would happen if New York City reverted to the old system of education that existed before his predecessor, Michael Bloomberg, won mayoral control of public schools in 2002.

“And sadly,” he added, “we would see a return to nepotism and corruption that loomed for too long in this city.”

Mr. de Blasio argued that his expansion of universal prekindergarten and his efforts to fund struggling schools would not have been possible without mayoral control.

Kathryn Wylde, the president of the Partnership for New York City, an advocacy group representing the city’s business elite, and Dick Parsons, a former chairman of Citigroup and Time Warner, backed him up. They said that mayoral control should not be tied to other agenda items, even those they may support, like the growth of charter schools.

“This is not a Republican versus Democrat issue,” said Mr. Parsons, a Republican. “This has to do with the most profound, most fundamental, most effective way of organizing and delivering education services to the children of this city.”

How successful Mr. de Blasio will be over the next few weeks is unclear, though the pressure of many of the same business leaders who support their campaigns could force Republicans to grant Mr. de Blasio his wish. Though conservatives in the suburbs and upstate revile the liberal mayor, Mr. de Blasio insisted their opposition to him was not “philosophical” because the State Legislature had swiftly renewed mayoral control under Mr. Bloomberg, a Republican-turned-independent.

Mr. Bloomberg, however, was a billionaire who showered his own cash on the Senate Republican majority.

“These same individuals voted for renewal of mayoral control in the exact same form several times so that doesn’t stand to reason,” Mr. de Blasio said. (A spokesman for the Senate GOP did not return a request for comment.)

As he noted, Mr. de Blasio was once a member of a school board under the old education system. Decades ago, it was progressives like Mr. de Blasio who believed decentralization of the schools was an answer to persistent educational struggles, particularly in black and Hispanic neighborhoods.

The mayor said in more affluent areas, including his Park Slope, Brooklyn home, the system made more sense. But it didn’t elsewhere.

“I knew we were the aberrant one,” Mr. de Blasio said. “The tales of corruption would make your hair crawl.” 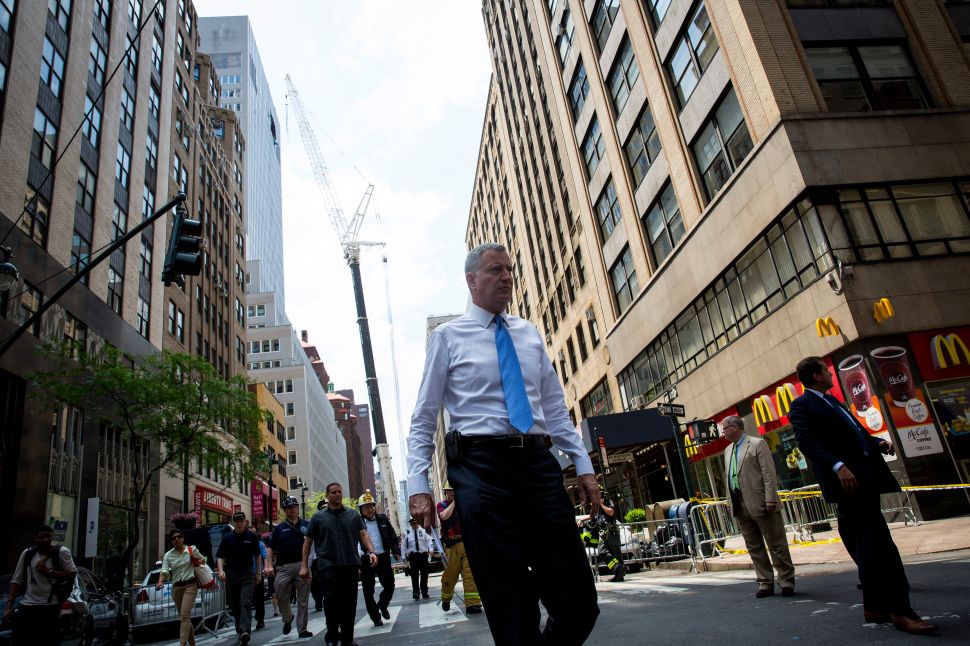