In the seminal 1991 comedic film What About Bob?, Bill Murray’s titular character speaks to the residents of a mental hospital when he quips, “It reminds me of my favorite poem, which is, ‘Roses are red, violets are blue, I’m a schizophrenic… and so am I!’”

“That jokes a million years old,” Murray told The Observer. “That joke’s Freudian.”

Old though it may be, the line is something of a tell about Mr. Murray, who fancies himself a poetry aficionado. Standing outside Manhattan’s Municipal Building on Monday to support Poets House, a nonprofit national poetry library and resource center in lower Manhattan, Mr. Murray sported his fedora to join patrons and prestigious poets alike for the nonprofit’s annual walk across the Brooklyn Bridge. He takes the walk with the nonprofit annually, culminating in a reading of Walt Whitman’s Crossing Brooklyn Ferry once they reach the other side.

“We lost many great poets this year,” poet Edward Hirsch said before the walk. “Giant oaks have been falling.” Mr. Hirsch then read the late poet Philip Levine’s The Unknowable, which he said was about jazz saxophonist Sonny Rollins practicing his horn on The Williamsburg Bridge.

Meanwhile, the poet Thomas Lux kept patrons in line, as he led the walk over the bridge.

“Stanley Kunitz said ‘I have a tribe, but we are scattered,'” said Mr. Lux, urging those making the walk to stay together and be careful. “I’ve seen bicyclists on the bridge try and dope slap poets.”

Mr. Murray hung in the back of the line as the walk began with musician Jenny Lewis at his side, who was in the general area for a concert festival at Seaside Heights, New Jersey last weekend (where she also danced in a giant rainbow costume during The Flaming Lips’ set.)

Ms. Lewis told the Observer that she relished the opportunity to participate in the walk, and considered Walt Whitman one of the greats. “I write poetry, too, don’t I?” she smirked.

The walk proved cathartic for patrons, not just because of the views, but the stories shared, too. Spatz Donovan, a veteran comedian and impressionist, told the Observer about his days smoking joints and writing songs with Jim Henson. He reminisced about opening for the late comedian George Carlin after Carlin’s triple bypass, and showed us a photo of him doing a Bob Hope impression while hanging out with Bob Hope.

Upon reaching DUMBO’s Jane’s Carousel, the hallowed 1899 ride on The National Registry of Historic Places, the crowd sat by the and lemonade was served. Richard Blanco, the poet who read at Obama’s second inauguration, scribbled some words off to the side of the crowd before approaching the microphone to read Whitman’s Crossing Brooklyn Ferry.

As Blanco finished his reading, Poets House’s annual walk became not just a ritual, but also a relevant happening—a place where poets and patrons, aficionados and auteurs, mentors and mentees alike could come together and schmooze about poetry.

When the Observer asked Bill Murray who his mentor was, he had to think for a minute. “My mentor?” replied Murray. “I don’t even have a sponsor!” 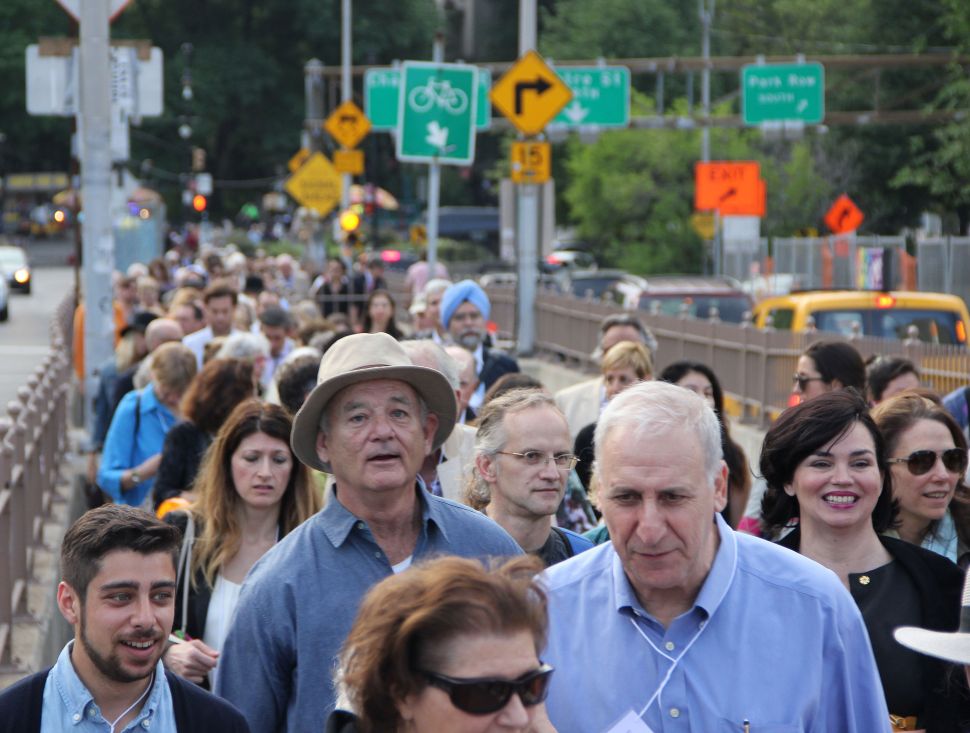