It’s another bad decision by a student group not exactly known for its erudition. To the contrary, it’s proven itself one of the strangest, most backward bodies in the academic world today.

Just this past March, the Student Union held a Women Conference in which its members advanced some of the most bizarre resolutions one could possibly imagine. In one resolution, titled “Motion 512” members called on gay white men to stop acting like black women. You can’t make this stuff up. The motion claimed that white gay men needed to stop claiming to have an “inner black woman” because, after all, they “benefit from white and male privilege.” Even stranger, the NUS tweeted a plea that members of the conference refrain from all clapping, to avoid “triggering anxiety.” In its place, they asked all attendees to show their appreciation for a speaker’s point with “jazz hands” — whatever those are.

But beyond being weird, the NUS — at the very same conference — proved itself lacking any semblance of consistency. Though they’ve called time and again for freedom of speech and expression on university campuses — a campaign that actually makes sense — at this Woman’s conference they advanced “Motion 510” calling on all skin-lightening products to be banned. Black women, they demanded, needed to be proud of their bodies. While that’s an honorable ideal (I have personally addressed the issue of skin-lightening products in earlier columns) dictating to black women how they ought to look seems to be falling into the problem they’re trying to solve. It’s also an outright abrogation of freedom of expression — hence the inconsistency.

Still, that’s mostly small and forgivable. The following is not.

In October of 2014, a Kurdish student watching the displacement of 400,000 Kurds after the siege of Kobani teamed up with Daniel Cooper to put forth a motion condemning ISIS atrocities and supporting the Kurdish, Iraqi, and Syrian people. In a Student Union that condemns white gay men and skincare products, the world’s foremost terrorist organization seemed to deserve a mention. Shockingly, though, students union members led by Malia Bouattia staged what the Daily Mail described as a “rebellion” and defeated the motion. Get this — they did so because it was considered “Islamophobic.” Let me repeat. Britain’s National Union of Students refrained from condemning ISIS, one of the world’s foremost murderers of innocent Muslims, because they considered it Islamophobic.

As if it couldn’t get more shocking, just this past month, the NUS passed a resolution announcing that it would be working to repeal the UK government’s Counter-Terrorism and Security Act “alongside civil liberties groups including CAGE.” You might not know what CAGE is, but you should. CAGE is officially a Muslim-rights organization, but they’re actually one of the world’s most famous defenders of Islamist terrorism. Asim Qureshi, CAGE’s director, rose to national fame when he publicly defended Mohamed Emwazi — or as he’s better known: Jihadi John. Speaking at a press conference, he referred to ISIS’ decapitator-in-chief as “such a beautiful young man,” adding that the murderer was “extremely kind, extremely gentle, and the most humble young person I ever knew.” When I heard of Emwazi’s brutal beheadings of James Foley, Steven Sotloff, David Haines, Alan Henning, Peter Kassig, Haruna Yukawa, Kenji Goto, and 21 Syrian soldiers, many words came to mind. “Kind and gentle” were not among them. With regard to Emwazi’s having turned into the world’s most famous murderer, Qureshi of course blamed the English government for treating the young man like an “outsider.”

Even after people all across the UK condemned the CAGE director for his appalling praise of a terrorist and justification for his atrocities, he still didn’t learn his lesson. As a guest on the BBC show “This Week,” Qureshi was confronted about the teachings of Islamic scholar Haitham al-Haddad, whom he’d referred to as his mentor. Among these teachings were genital mutilation, domestic violence, the stoning of adulterous women, and of course, the claim that the Jews are descendants of pigs. The CAGE director refused to condemn any of those beliefs, saying repeatedly “I’m not a theologian.”

This is the man the NUS is willing, even proud, to work with.

Which brings us to today’s NUS shocker: the boycott of Israel.

Worse than being immoral, inconsistent, and willing to endorse apologists for evil — the NUS trades in rank hypocrisy. They will not condemn ISIS, because doing so would be Islamophobic. But they’ll boycott Israel, without any regard for the anti-Semitism which all agree is a more present threat. They will collaborate with an outright apologist for Islamist terror but won’t allow a soda-machine in a school cafeteria because it’s made in Israel. The depth of the hypocrisy is staggering.

Such blatant Jew-hatred is something to which Jews have become accustomed. The real question is why the UK is not aware of the moral sinkhole and vaudevillian organization that is Britain’s National Student Union. 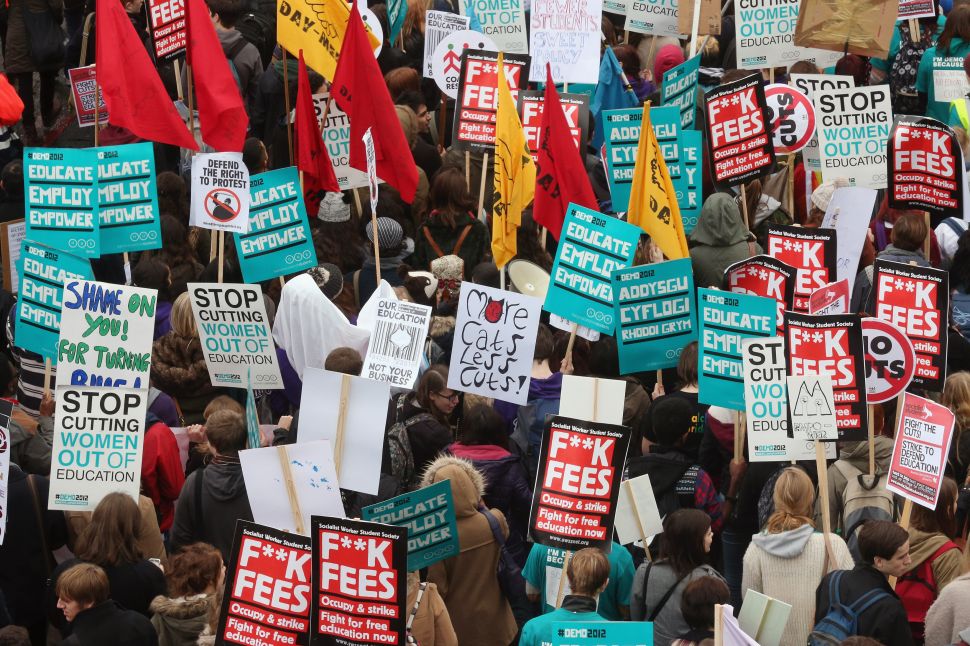