Behold, the one thing your daily shower routine has been missing: a handheld, -resistant gadget designed to accurately track how toned you are.

We’re part terrified, part intrigued by the Skulpt Aim, a $200 contraption claiming to be the world’s first device for measuring body fat percentages and muscle quality. Hold the Aim against any of 24 specified muscles on your body, and, using clinically-tested technology, it’ll purportedly measure if you’re losing fat and building strength—and if so, how much. Welcome to the latest advancement in fitness tracking.

“The Skulpt Aim is for anyone who cares about their health and fitness,” Juan Jaramillo, VP of Product at Skulpt, told the Observer. “It gives athletes data about their bodies that they are unable to get anywhere else, and it gives beginners the ability to see changes sooner and know exactly when they are losing fat and gaining muscle.”

So how does this mystical machine work? First, users are instructed to wet the sensors on the back of the device—that’s why the company recommends using it in the shower, however creepy the mental image—and place it against a muscle of their choosing. By running a small electrical current through the muscle, the Aim is able to rate its “muscle quality”—i.e., the composition of your muscles and size of your muscle fibers—on the “MQ Scale.” It’s also able to measure the fat percentage of each muscle.

Here’s the more scientific description, as found on the product’s website:

“The technology used in the Skulpt Aim is called Electrical Impedance Myography (EIM). Aim has 12 sensors on the back with optimized configurations and frequencies. When placed to the muscle, Aim sends a small current past the subcutaneous fat and through the muscle. Since current flows differently in fat than in muscle, and in a fit muscle than an unfit one, the EIM technique is able to evaluate the quality of the muscle, and the percentage of surrounding fat.”

Using Bluetooth, the results are then transferred to the accompanying smartphone app.

EIM—the technology used by the Aim—was developed 15 years ago by Skulpt’s own cofounder, Dr. Seward Rutkove, a neurologist at Harvard Medical School.

“He was frustrated that there were no good ways to measure muscle health,” Mr. Jaramillo said.

“After EIM was successfully adopted by the medical space, we saw the great potential of introducing it to fitness enthusiasts,” he continued. “For the first time, they are able to get data about their muscle quality, and better understand their bodies to succeed in their training.”

We had to be blunt: Does the Aim actually work, or is it a load of pseudo-scientific baloney? Mr. Jaramillo insisted “the technology behind the Skulpt Aim has been validated through dozens of clinical trials and is currently used in top US research hospitals.”

Mr. Jaramillo recommends you use the Aim daily, or at least a few times a week.

“While you may not see daily changes in body fat,” he said, “measuring yourself more frequently will improve your chance of effectively tracking your fitness progress.” 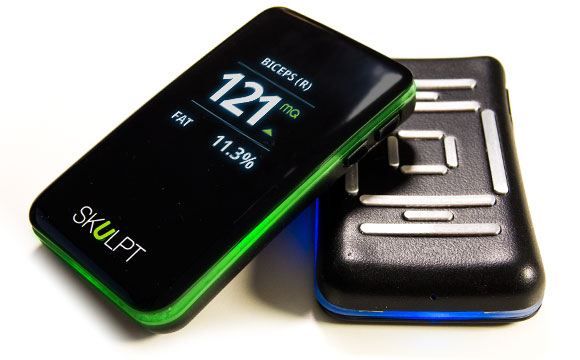