Chris Benz knows he’s blassed—“that’s what we say around the office, instead of blessed,” he mused playfully—to be the new creative director at Bill Blass. In November, the 33-year-old designer took over at the dormant brand and has worked to cultivate the kind of startup mentality he thinks is befitting of a brand that’s always been distinctly American. Through an informal talk presented by the Fashion Group International at Space 530 in Midtown, Mr. Benz was upfront about his plans for the direction of Bill Blass, his understanding of the brand’s legacy and why he’s tired of the seasonal runway show format.

The house of Blass has been around since the ’70s and while Mr. Benz understands that the brand has certainly lost its cool factor, he hasn’t lost sight of its legacy. Mr. Benz, who spent almost five years at Parsons and called a stint working at J.Crew under CEO Mickey Drexler his version of grad school, is working to keep Mr. Blass’ original vision intact. With an Apple Watch on his right wrist and an analog watch on left, Mr. Benz spoke about his admiration for Mr. Blass displaying an almost encyclopedic knowledge of the founding designer, who passed away in 2002.

Not the Blass you remember: “What was once a juggernaut of American sportswear, over the years really became somewhat of an over-licensed, heavy-handed, beaten-down brand. In thinking about reimagining and renovating the house of Blass, we have been using allegories of renovating a home. Although it may have been crumbling and forgotten, it still has great bones. It’s still a billion dollar company that’s all about great American sportswear and color, and that’s really the goal.”

Benz’s approach to reinvention: “Although I was on a hit TV show for five years with my own company, now I’m the new James Bond. James Bond movies are no longer using the scripts from the ’70s; They’re writing entirely new scripts, but the audience has stayed. We’re taking the James Bond of fashion, and creating the next chapter of it, in an entirely new way.”

Introducing a new tradition: “What’s not interesting to me are collections in the traditional sense. In re-introducing Bill Blass, my vision is to have an ongoing delivery of capsule collections with fabrics and product. Every time you go to the website, I want you to see something new. If you’re going to your friend’s rooftop party on Friday and you order a dress on Wednesday, you don’t care if it’s Resort 2015 or Fall. We’ll be delivering fabulous capsule collections every month with their own color palettes…Our customer will [not] wear Bill Blass head to toe, which I don’t think was ever Mr. Blass’ intention.”

A patriotic aesthetic: “The brand’s greatest potential is that it has such an an innately casual [and] American sportswear sensibility. For the most part, I feel the level of casual sophistication is somewhat devoid in fashion in a way that respects the consumer.”

Blass’ low-key customer: “She’s a casual American girl. We have nuanced personalities for our customer, but she’s certainly the girl in flat shoes. She wants to feel as though she’s wearing jeans and a T-shirt, even if she’s in a floor-length dress. I think that matter-of-factness is something that is specifically American in its sensibility.”

The current state of the industry: “There is a lack of humor in fashion. To me, it’s always been the fun, cool industry to work in, and I always wanted people to be on my side and see how much fun we really have behind the scenes. That’s something that we want to highlight and something that was always a part of the Bill Blass legacy.”

The house’s digital-only launch: “It’s still early and we can be flexible, but we will be launching entirely with e-commerce, one way or the other.” 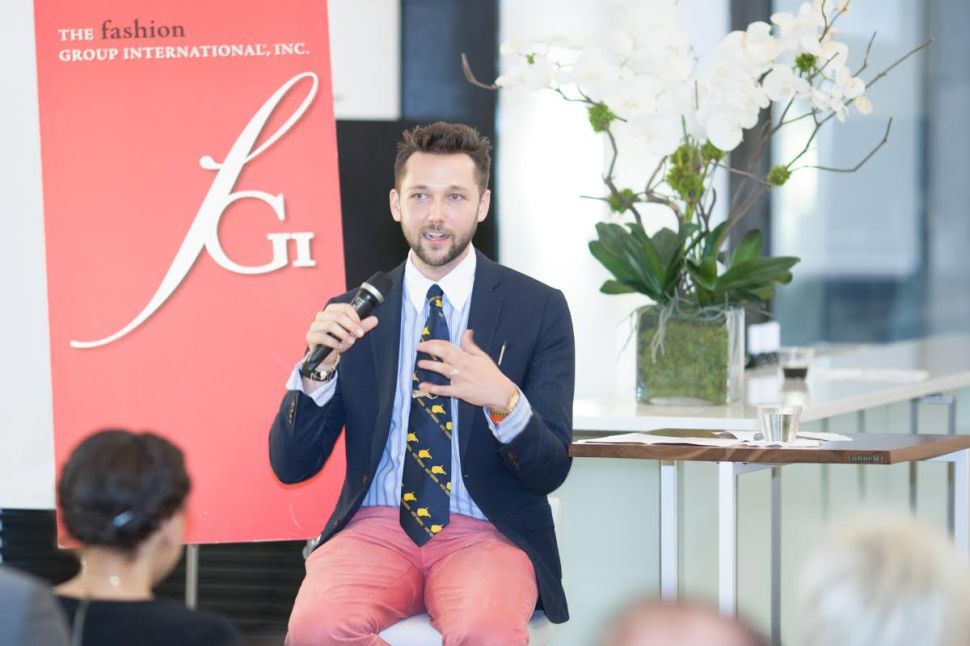