Comedian Carlos Mencia does it. And so does actor/comic Dane Cook—even in an HBO special. And the late great Robin Williams did it, too. So what is “it” they have in common? Stealing material.

And now, Gov. Chris Christie has accused the latest entry into the GOP presidential primary of doing the same thing: stealing his political routines.  According to Erick Erickson  (Editor-in-Chief, RedState), “Donald Trump is the disrespectful candidate for people who disrespect the process. He’ll be rude. He’ll be loud. He’ll be confrontational.” But, not so fast says Christie Deputy Chief of Staff for Communications Maria Comella:

“No one has been more rude and disrespectful than Gov. Christie. He’s told the media to take a bat to Senator Loretta Weinberg and called children ‘drug mules’ for the NJEA. Called Assemblyman Reed Gusciora ‘numbnuts’. Trump? An amatuer. Please—he’s as nice as Mother Teresa compared to the Governor.”


Christie also claims that Trump stole his idea about ‘sealing off’ New Jersey, by promising he will build a ‘wall around America as president: It is well known that the Christie Administration perpetrated the George Washington Bridge lane closings.

“That’s completely ridiculous. That bit has been in the public domain for Republicans since January 20, 2009. As a matter of fact, all of the GOP candidates have been calling Obama ‘stupid’,  each in their own way since way before Christie even became the New Jersey governor. Maybe Chris has been spending too much time eating doughnuts on the David Letterman show – – the sugar rush has gotten to his head,” added Trump himself.

Still,  Christie has not  yet announced his entry into GOP primary, where he will join at least 14  Republican hopefuls.

“And when he does, he will show Donald Trump how to be rude and disrespectful,” added Comella.  “No one will out rude this governor,  especially not some failed reality show host with a really bad combover.” 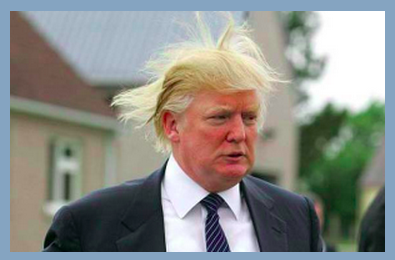