SOMERVILLE – On the eve of a court decision on a legal battle between Gov. Chris Christie and public sector labor, teacher members of the Somerset County Education Association (SCEA) stormed the downtown offices of LD16 Republican lawmakers demanding full payment of the public pension.

The state’s high court tomorrow is set to release its long-awaited decision over the state’s move to cut some $1.6 billion from a slated pension and benefits payment in 2015, according to an announcement by state judiciary officials. 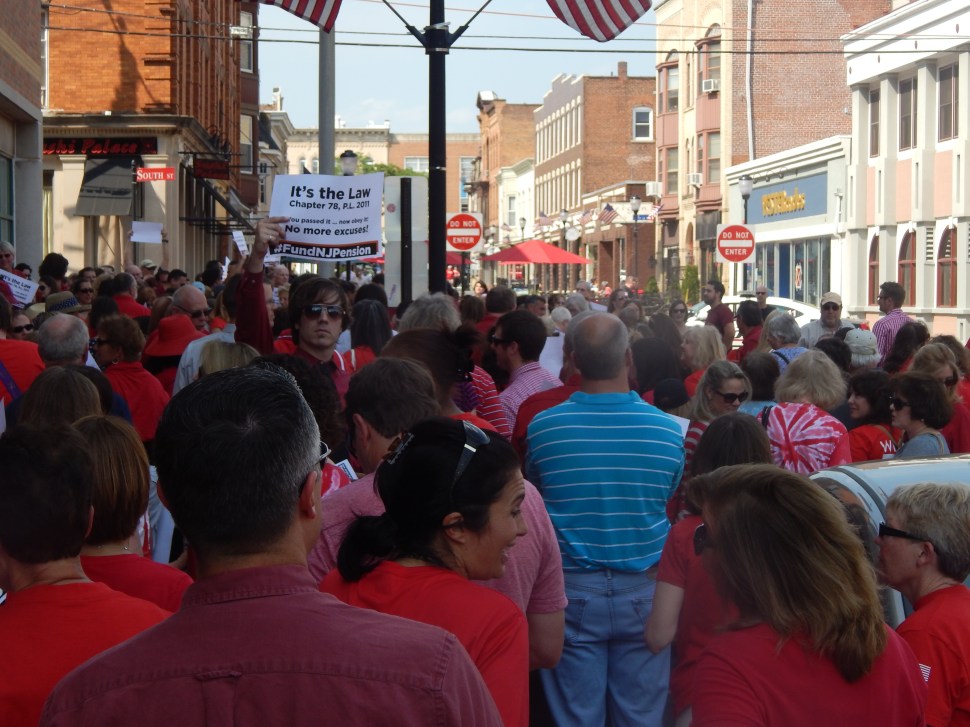 Steve Beatty, president of the SCEA, grabbed a bullhorn and went to the front of the crowd. “They said corporations are too big to fail,” he said. “Our pensions are equally too big to fail. Without strong organizations like ours there would be no middle class.”

Representing 200,000 public sector employees statewide, Blistan added, “We have accepted less salary to get a pension.”

Now they want the full payment.

“My plan is to move more and more teachers onto the local school budget so they are less dependent on a vulnerable revnue stream,” Ciattarelli told Blistan amid an upgrade of chants. 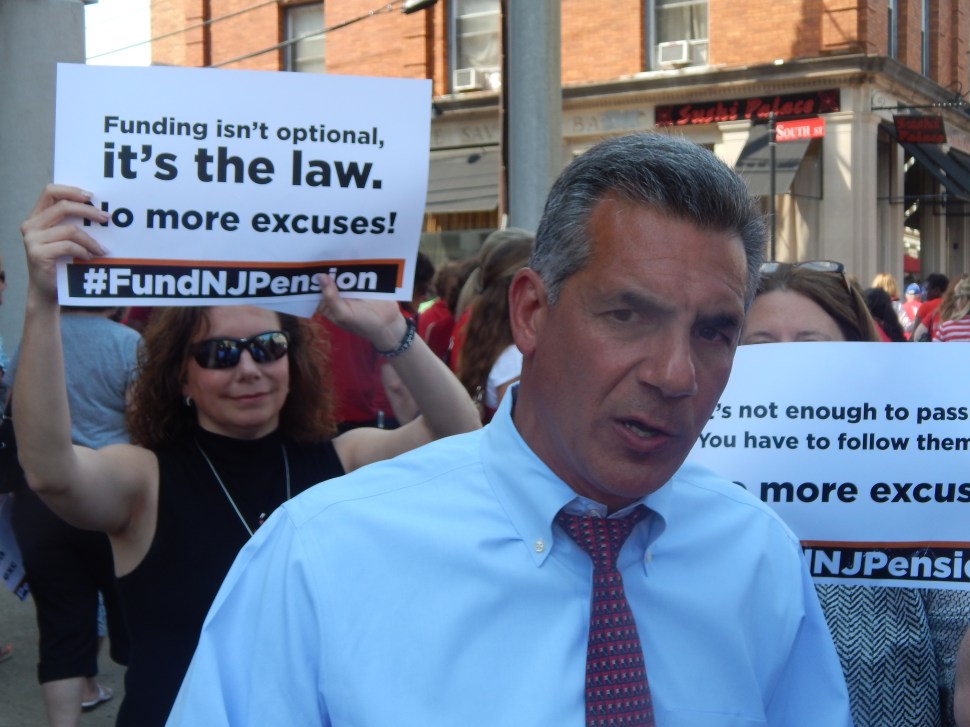 A possible 2017 Republican candidate for governor, the assemblyman engaged in friendly jousts with the NJEA vice president and other NJEA members.

Senate President Steve Sweeney (D-3) is the only one who’s put a plan on the table that would generate money to make up the shortfall, Ciattarelli noted, pointing to Sweeney’s proposed millionaire’s tax.

“But that only gets you $700 million,” he said. “Where is the rest of the money coming from? At 10 a.m. the Supreme Court will decide. I have no inside information, but my gut is saying they’re not going to order the payment.

“What we need is a total reform,” he added.

Ciattarelli then did what every savvy Republican politician does when he’s got his back against the wall: he quoted John F. Kennedy. “Kennedy said life’s not fair,” the assemblyman told Domanski (pictured below). “Teacher’s pensions are the can that is getting kicked down the road.”

“We need to fund what is promised,” the veteran teacher said. Then Blistan jumped in again and, along with Beatty, noted that if it weren’t for all the state corporate giveaway, there would be money for the pension system.

“I have issues with that,” Ciattarelli said. “But if Merck and Mercedes leave, that puts a strain on local budgets.”

“I’m a little leery,” Blistan told the Republican lawmaker. She also mentioned to PolitickerNJ, when asked,  “At least he’s out here.” 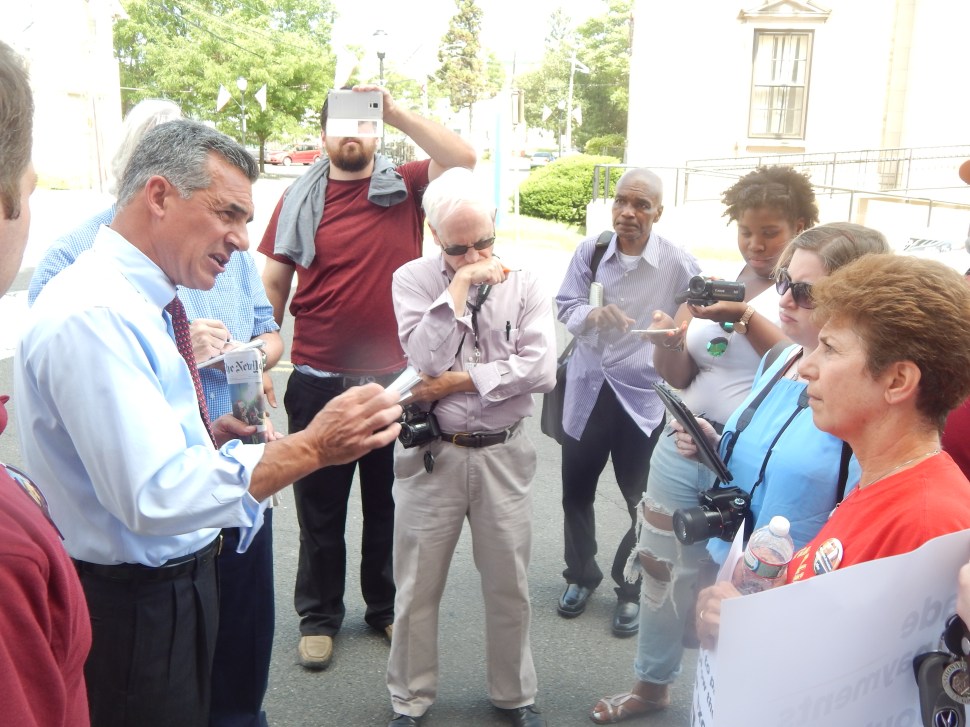 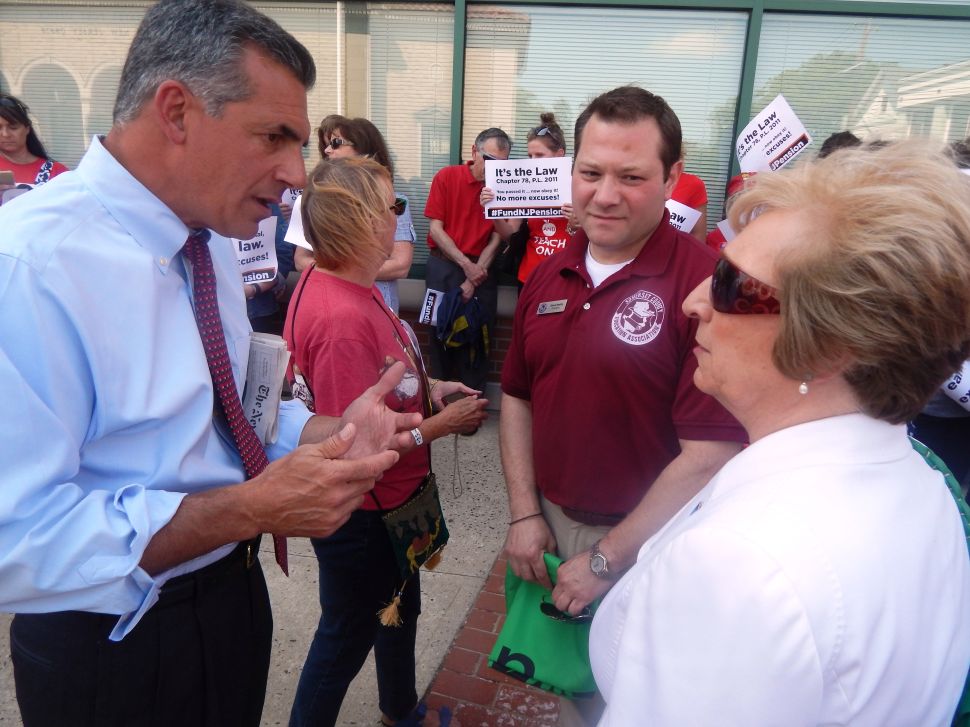